Murkowski: Why I didn’t vote for the COVID-19 relief bill 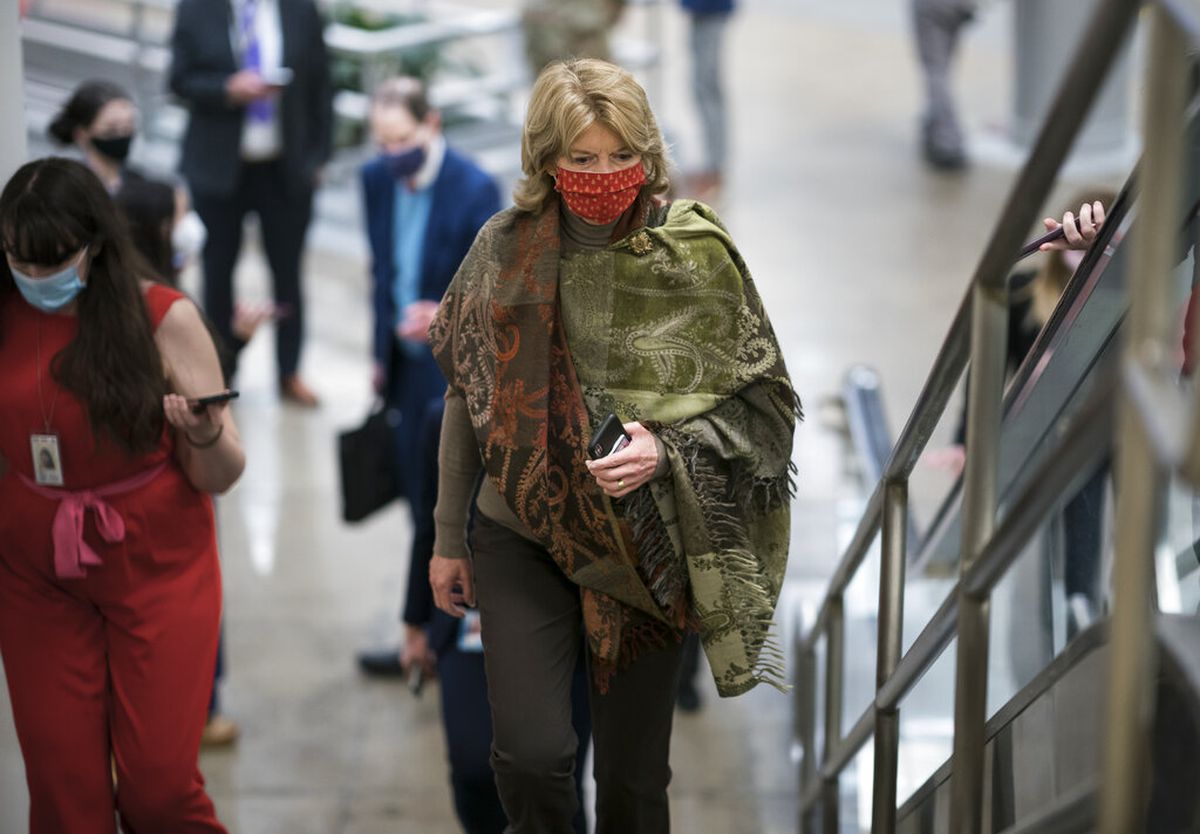 Sen. Lisa Murkowski, R-Alaska, heads to the chamber as the Senate holds a voting marathon on the Democrats' $1.9 trillion COVID-19 relief bill that's expected to end with the chamber's approval of the measure, at the Capitol in Washington, Friday, March 5, 2021. (AP Photo/J. Scott Applewhite)

Sen. Lisa Murkowski, R-Alaska, heads to the chamber as the Senate holds a voting marathon on the Democrats' $1.9 trillion COVID-19 relief bill that's expected to end with the chamber's approval of the measure, at the Capitol in Washington, Friday, March 5, 2021. (AP Photo/J. Scott Applewhite)

March 11 marked exactly one year since communities across the United States shut down in an attempt to slow the spread of COVID-19. Those efforts were valiant and significant, but the virus still claimed the lives of hundreds of Alaskans and the economic impacts on our state have been profound. Travel bans and hunker-down orders essentially shut down Alaska’s tourism industry overnight. Necessary safety restrictions and public health concerns decimated businesses across the state, including our commercial fisheries. And the state’s budget is still in turmoil due to the combined drop in oil prices and consumption.

Despite the considerable federal support to address the pandemic in 2020, I recognized that continued targeted relief was necessary in the New Year. We had worked in a bipartisan manner on five previous COVID-19 measures, and it was my belief and intent to do the same on the sixth. When President Joe Biden laid down a $1.9 trillion bill, the extraordinary price tag caught the most attention. I collaborated with a small group of Republicans to offer a $618 billion relief proposal with the goal of finding middle ground.

Our working group met with President Biden and Vice President Kamala Harris to discuss our respective proposals, and found that we shared many of the same priorities. I had hoped that we would be able to find common ground.

Ultimately, rather than working across the aisle, Democrats moved forward with a one-sided proposal and no consideration for the plan presented by their Republican colleagues. They passed a $1.9 trillion funding package — the largest spending package Congress has ever advanced — on top of the $4 trillion that the federal government advanced last year on relief efforts, not counting additional measures taken by the Federal Reserve. Of that $4 trillion, there is approximately $1 trillion that the government was still working to distribute. So much money has been spent that it has been hard for the agencies to accurately account for all of it.

There are good, necessary things in the American Rescue Plan that I was able to help shape and influence, such as support for Alaska’s struggling tourism industry and our seafood processors. The plan calls for additional funding for vaccines, unemployment Insurance and the Paycheck Protection Program; desperately needed assistance for behavioral health services, school reopenings and nutrition programs; and aid to the state and local governments that have seen tax revenue dramatically decline. These are the type of targeted, COVID-19 relief initiatives that are appropriate for a COVID-19 relief package — support that Alaskans need. Many of those initiatives were included in the Republican working group framework.

Unfortunately, the Democrats’ final product went far beyond COVID-19 relief. The final package includes more money for underfunded pension programs than it does for vaccines and testing. An additional $9 billion is included to help the U.S. expand and modernize America’s cybersecurity capabilities. While I have long supported bolstering IT and security operations, this is not COVID-19 relief. Further, Congress appropriated $68 billion to help K-12 schools last year. Of that, $63 billion remains unspent. This most recent bill directs another $122 billion to schools to be spent down by September of 2023.

Working to shape formulas for state and local relief targeted to those most negatively affected — like Alaska, with more than 30% revenue loss, made sense. Directing billions of state relief to a state like California, which had a record surplus in 2020, doesn’t make sense.

These are just a few examples of extraneous items that were included in the final product. In an effort to help those who need help most, we shouldn’t unnecessarily burden our children and grandchildren with unnecessary debt.

The Democrats chose to move through reconciliation, a legislative process that is limiting and inherently partisan in construct. It was an early decision to work around the minority, rather than with us, which is unfortunate. After the trauma of a global pandemic, Americans need confidence again. The vaccine can provide much of that. My hope is that Congress can also help to rebuild confidence by working together.