Murkowski should abstain from vote on DeVos 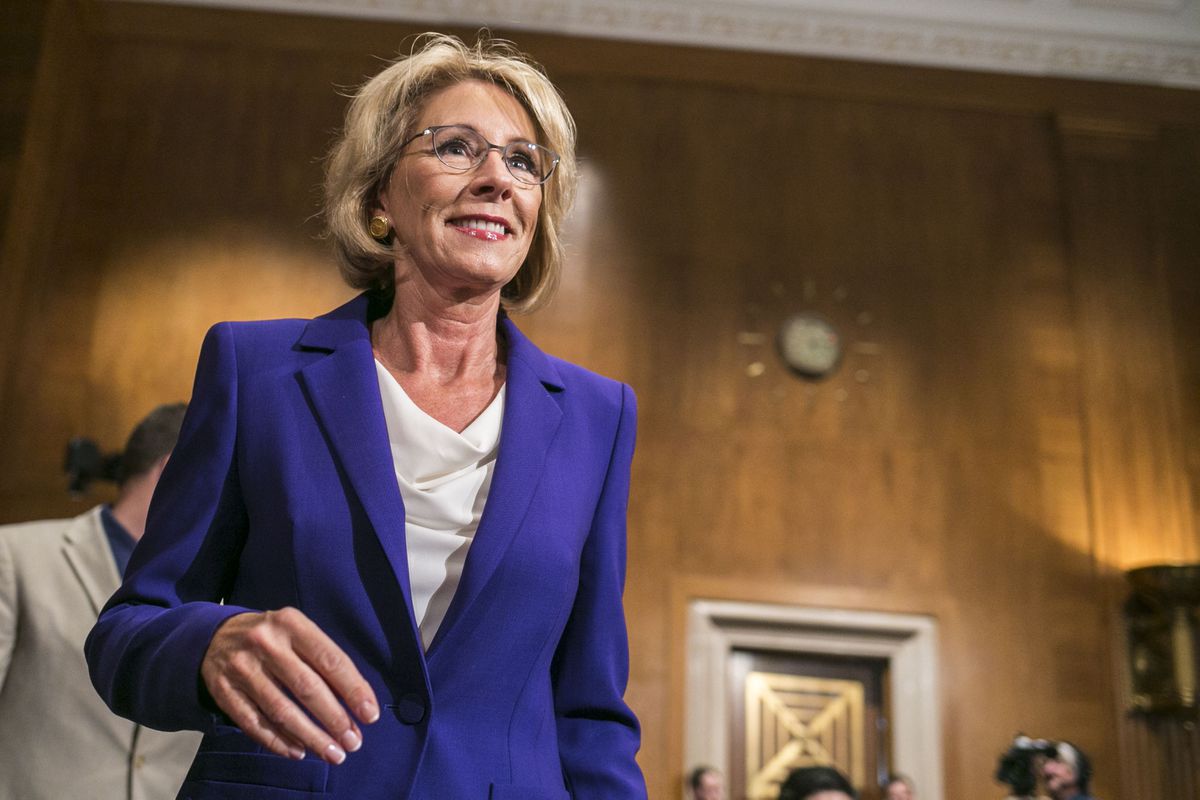 Betsy DeVos, Donald Trump’s nominee for education secretary, arrives at her confirmation hearing before the Senate Health, Education, Labor and Pensions Committee on Capitol Hill in Washington Jan. 17. DeVos defended her work steering taxpayer dollars from traditional public schools at her hearing, arguing that it was time to move away from a “one- size-fits- all” system. (Al Drago / The New York Times)

Betsy DeVos, Donald Trump’s nominee for education secretary, arrives at her confirmation hearing before the Senate Health, Education, Labor and Pensions Committee on Capitol Hill in Washington Jan. 17. DeVos defended her work steering taxpayer dollars from traditional public schools at her hearing, arguing that it was time to move away from a “one- size-fits- all” system. (Al Drago / The New York Times)

This morning, it's likely many Alaskans will interview for a new job. They've practiced answering questions, studied up on the company and even planned what to wear. But we're willing to bet none of them are planning to give the person conducting their interview a stack of cash.

But in Washington, D.C., the same rules don't apply. Betsy DeVos – President Trump's nominee to be education secretary –  has given tens of thousands of dollars in campaign cash to many of the senators who are charged with determining if she is qualified for the position.

In the halls of Congress, DeVos is better known as a billionaire political megadonor than as any sort of expert on education policy. By some estimates, DeVos and her family have funneled as much as $200  million to political candidates, super PACs and other so-called "dark money" groups that keep their donors and political spending secret. During the last election, more than $43,000 of that DeVos money went right into Sen. Lisa Murkowski's campaign coffers.

If you're looking for an example of Washington's rigged system, look no further. Despite recently taking thousands in campaign contributions, Murkowski is set to vote on DeVos' nomination next week.

But the vote on DeVos' nomination isn't problematic only because she doesn't have any experience in public education, or because of how much money she has given politicians. It's outrageous because DeVos has publicly admitted what those political contributions have bought her.

In her own words, she has "decided … to stop taking offense at the suggestion that we are buying influence. Now I simply concede the point. They are right. We do expect some things in return."

The sheer volume of contributions from DeVos, along with her admission that she is buying influence, shifts the debate from whether she is qualified to be our next secretary of education to whether senators such as Lisa Murkowski are even able to look past the money they've taken.

Over the past several weeks, our members in Alaska and around the country have been circulating a petition that we launched jointly with another money-in-politics reform group, Every Voice. The petition demands that Murkowski recuse herself from this vote. Unfortunately, she has refused.

If Murkowski does not recuse herself, we'll have, at a minimum, the appearance of a high-ranking government position that is sold to the highest bidder.

The good news is that there's still time. Murkowski has until 6 a.m. AST  on Tuesday to put the public interest ahead of political partisanship.

We encourage all Alaskans to contact Murkowski's office to tell her to abstain from the vote.

Alaskans are fed up with a broken system in Washington that rewards a small group of billionaires and shuts out everyone else. The DeVos nomination represents the worst of this system.

If we stand together, the combined voices of everyday, hardworking families can overcome the big money influence of the special interests. Our kids, their future and the school systems tasked with providing them with a quality education deserve nothing less.

Tiffany Muller is executive director of End Citizens United PAC, which  is dedicated to campaign finance reform, specifically ending the flow of unlimited secret money in our elections and overturning the Supreme Court's Citizens United ruling.