Is Alaska’s dividend a good model for the world? Probably not 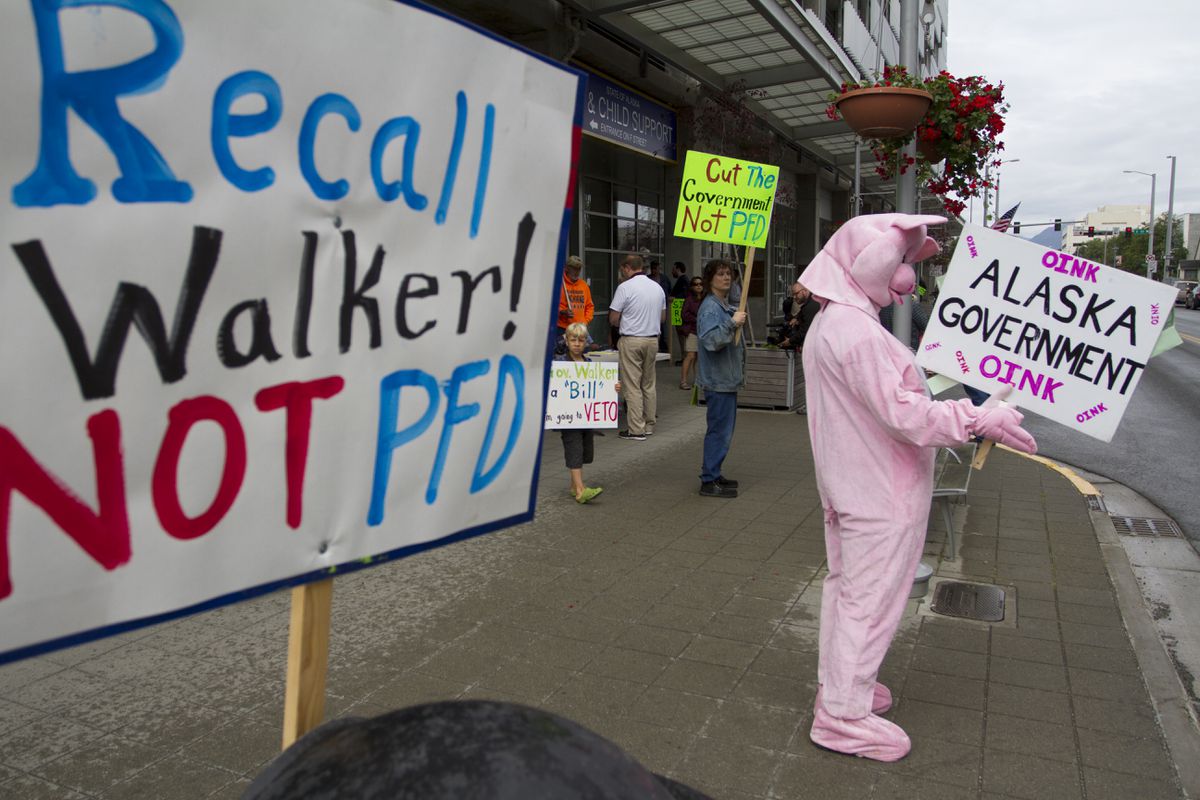 Protestors position themselves across the street from Gov. Bill Walker's Anchorage office, while they ask registered voters to sign a recall application to vote him out of office during the #SavethePFD protest on Monday, July 11, 2016. (Sarah Bell / Alaska Dispatch News)

Protestors position themselves across the street from Gov. Bill Walker's Anchorage office, while they ask registered voters to sign a recall application to vote him out of office during the #SavethePFD protest on Monday, July 11, 2016. (Sarah Bell / Alaska Dispatch News)

Socialists around the world look to Alaska as the best example of universal basic income, with our Alaska Permanent Fund dividend. What they don’t realize is that the dividend has become their worst nightmare.

After writing positively about the dividend for decades, the last three years changed my mind. The dividend has changed Alaska in negative ways that its founders never imagined.

[The oil boom made Alaskans richer, right? An economist says no.]

Proponents of universal basic income, or UBI, support regular, guaranteed government payments to every resident as a way to end poverty. Our dividend isn’t large enough to do that, but it helps. Experts call it the biggest, longest-lasting real-life trial of UBI worldwide.

For decades, the main proponents of basic income were academic leftists. The idea seemed too expensive and far-fetched for the mainstream.

But in the last few years, UBI became a serious proposal in many nations and even in parts of the United States. Tests have been planned or implemented in places including Kenya, Finland and Stockton, California.

Gov. Sarah Palin criticized the Stockton test as socialism, but the city’s mayor fired back that it was based on Alaska. Facebook billionaire Mark Zuckerberg visited Alaska last year and left extolling our UBI plan — the dividend.

UBI is supposed to make welfare popular — since everyone gets paid, need it or not — and to provide income to workers permanently displaced by automation.

But the idea isn’t only for liberals anymore. Exxon, BP and Shell have signed on to a “climate dividend” proposal, a carbon tax to be rebated to Americans. In the first year, the price of a gallon of gas would go up 36 cents and a family of four would receive about $2,000.

That plan is intended to reduce carbon emissions without hurting the economy. On paper, it works. But how would it change the relationship of citizens to the government and to one another?

In Alaska, those changes have been the dividend’s deepest lesson. Once citizens receive a UBI, the desire to keep it can overwhelm all other political preferences.

Outside Alaska, observers seem unaware of that hazard.

A lot of what they know about the dividend is peculiar or wrong. Some call it the “social dividend.” The Alaska Permanent Fund is sometimes called “the dividend fund.”

The 42-year-old Basic Income Earth Network maintains an Alaska channel on its extensive website, with distant perspectives on our state politics. A writer in India last year reported on the legislative session in Juneau under the headline, “Alaska’s Permanent Fund Dividend: The world watches anxiously.”

That writer, like others, interprets the purpose of Alaska’s dividend according to a vision for his own society. Depending on point of view, outsiders think the dividend is for alleviating poverty, motivating desired behavior or distributing resource wealth to citizen-owners.

The dividend originally emerged from the imagination of Gov. Jay Hammond. He had each of these purposes in mind.

As a rural resident, Hammond hoped the dividend would support indigenous lifeways, as it has, providing money for ammo, snowmachine parts and such. And he liked how the payments denied “fat cats” in Anchorage a share of oil money for their boondoggle projects.

Hammond also sold the dividend as an incentive — or a bribe — to motivate the public to protect the Permanent Fund itself. That aspect was spectacularly successful. It took only a year or two before the fund became politically sacrosanct.

Finally, and dearest to Hammond, the dividend was supposed to share Alaska’s oil wealth with its owners, who he perceived to be all the people of Alaska.

To fulfill that goal, he structured the payment to reflect years of past Alaska residence. At this point, long-term residents would be getting payments more than 50 times larger than one-year residents.

Why? Many in Hammond’s generation hoped Alaska would finally wake up from the gold rush.

Since 1898, Alaska had been a place where people went to make money fast and leave. Hammond wanted to reward long-term residency and build a sustainable economy, a place to invest rather than merely exploit.

In 1982, the U.S. Supreme Court blocked Hammond’s residency plan, saying everyone should get the same amount. On receiving that news, he at first wanted to kill the dividend.

The decision ended the ownership concept. It’s absurd to say getting off a plane in Anchorage makes you an equal owner in Alaska’s resources.

As it turned out, the dividend did the opposite of what Hammond intended. Alaskans forgot all about investing in Alaska.

The just-completed debate on state finances produced a definitive conclusion: Regardless of the degradation of government services, Alaskans prefer to maximize dividends and avoid taxes. Key leaders who felt otherwise lost power or were flushed out of government in the election.

That’s an outcome that progressive supporters of UBI should fear. Alaska government services mainly help children, the poor, sick and old. Education is the greatest vehicle for reducing poverty, but Alaska schools are struggling.

Alaska faces some of the nation’s worst social problems — sexual assault, violence, substance abuse, suicide. Yet despite Alaska’s extraordinary wealth, spending is comparable to other states, where citizens pay taxes, when measured in comparable terms.

Now we have decided to cut spending further, except for our largest single expenditure, which we will increase: the dividend.

Hammond came to deeply regret agreeing to repeal Alaska’s income tax in 1980. He saw citizenship as carrying responsibilities as well as privileges. He wanted government to hand out resource revenues, but thought it should also “claw back” the money in taxes.

Instead, the dividend became a reason to oppose income taxes. High income earners say they won’t pay taxes to have the money disbursed in dividends to people who don’t need it.

The dividend also created a sense of obligation to the oil industry, which Hammond saw as an adversary. The chair of the Permanent Fund’s trustee board recently declared it should own oil stocks because of that obligation. Any oil tax increase is politically dead.

Hammond was right that the dividend would change us. But he didn’t know how much or how negatively. He didn’t anticipate the dividend becoming the primary purpose of state government.

The dividend privatized Alaska’s future. It cemented citizens’ role as takers. It is not worth copying.