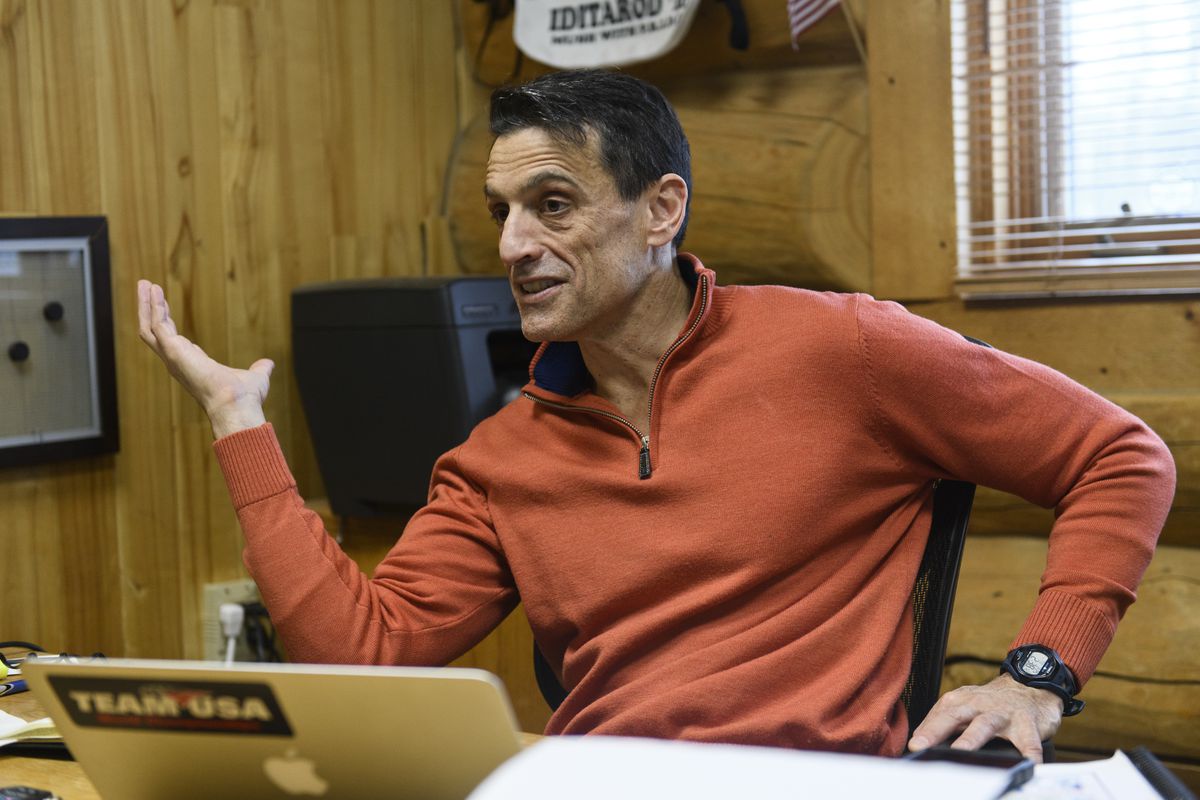 This year, the Iditarod will start under new leadership for the first time in decades. CEO Rob Urbach was hired in June, replacing Stan Hooley, who held the position for about 25 years.

Before being hired by the Iditarod Trail Sled Dog Race, Urbach led USA Triathlon as CEO from 2011 to 2017. His personal athletic background is in triathlons, but he said he’s been amazed at the stamina and willpower of the mushers and sled dogs who run the 1,000-mile race.

A couple weeks before the 2020 race starts, Urbach, 57, sat down with the Daily News to talk about the future of the race, how to grow its popularity and how to appeal to a younger generation of fans.

He also talked about increasing the cash prize for the winning musher, including the Iditarod’s new chance game, where you can pay $10 to guess the winning musher, their time and the number of dogs they finish with for a chance to win 40% of the overall cash pool.

[When does the 2020 Iditarod start? (And 9 other questions about Alaska’s famous sled dog race)]

The interview below has been edited for brevity and clarity.

Anchorage Daily News: What has been the biggest surprise since taking the job?

Rob Urbach: The behind-the-scenes teamwork and culture and complexity — everything from is there straw in Ophir, and if there’s food going out, some is frozen, some refrigerated. Some is dry, some’s for people. How do you manage this thing in preparing for all these contingencies?

Global warming’s obviously been an issue. There’s been an issue with the water. These people get wet. How comfortable can you be when you’re sleep-deprived for seven days? You’ve barely slept, if you’ve slept it’s like laying down next to your dogs and you’re wet. How they can tolerate those dynamics, and at the same time you’ve got to make sure your dogs are fed first before you can eat or rest. So. it’s just something about the mushers, that are pretty neat people. There’s a tiny percent of the population that could actually, you know, get an Iditarod belt buckle.

We’ve got several people on snowmachines out there putting the trail right now.

They’re out there hauling whatever they need — survival gear and food — by themselves and working all day clearing up stuff.

There’s places where the overflow doesn’t freeze because there’s so much snow on top. So you have to clear the snow, like on the lakes, to get it to freeze. If you’re at Willow for our start, you’ve gotta make sure that stuff’s gonna freeze.

It’s the complexity of the coordinated effort for so many that are supporting a passion.

ADN: How do you balance focusing on this race versus the long-term viability of the Iditarod?

Urbach: I think that we need to be better. We need to do things differently to get different results. I’ve used the mantra ... we’re a 48-year-old startup because we’re trying to be more relevant and we’re innovating.

We’re as authentic as you can be, being out there in this self-reliant way. But the world has moved differently. The world is moving towards small screen. We need to be better with our app.

Ultimately, doing things in the future, like, imagine if you could follow your favorite musher on your own feed, you control what drone feed you want. Imagine if we had a drone following each team. How cool would that be?

Our fan base has gotten pretty mature, so how do we make it more compelling to (a younger) generation? Does the Iditarod have highlights? Not yet, but we are putting out highlight packages to distribute to the networks.

We have our 50th year anniversary, two years after this race, so 2022. So it’s about future-proofing your base, so it will be around 100 years from now.

ADN: How do you plan to increase the purse?

Urbach: Trifecta is a first start. Ultimately we’d like to (have fantasy mushing). Imagine you have a team of dogs. You could go with your friends to a draft the dogs, and trade dogs along the way and, do your own virtual mushing.

I would love to provide $1 million to anybody to get to the top 10 in order. Top 10? Maybe someone could do it, but in order? I mean, let him try, right?

The Trifecta, I hope it works, but it’s cumbersome. You can’t enter online. You have to complete the transaction either in person or over the phone. It’s so unfortunate, I think. I’m sure the people in Juneau have a reason for all this stuff, but I hope we have an ongoing dialogue.

A $1 million purse is my goal on the 50th year. It’s my personal goal, I can’t quite guarantee that.

Our ability to generate more sponsors, I think, will happen after this year. It just takes time and when I got here, we had to sort of renew 20 partners that all are expiring and that took a lot of time. We have all of our partners back for this year’s race.

ADN: The Iditarod has partnered with sled dog races in Norway, Russia and Minnesota. How does that fit in to the race’s future?

Urbach: By the time we put that together, it was December, so really got out too late to monetize that or do a Discovery-type, or ESPN deal. But I think we feel pretty good about what we produced so far. We’re having conversations for next year (for a TV deal). That will be a game changer.

The intent is to create enough scale for television, so that your going to watch mushing at eight o’clock on Tuesdays on Discovery Channel. There’s enough content in there. We’re going to do a full episode series. It’s an hourlong show, condensing 10 days into two episodes. So that’s the intent.

The content is pretty cool. The visuals and type of camera work that we can do from our competition drones is pretty cool. Alaska is kind of white-hot for that kind of stuff right, you know, with different reality shows out about Alaska.

ADN: Will that create more mushers in the future?

Urbach: It’s a challenging sport to get into. You have to be pretty immersed in the hobby to really get into it in a big way. This weekend is the Junior Iditarod. We’ve got some pretty big plans to grow that for the future years, even for next year.

We probably haven’t done a great job in the past about schools in Alaska. So this year with sort of pivoted in reallocating resources to Alaskan schools.

We have cultural relevancy, and we have pretty robust Iditaread program — they read books along the trail and that sort of thing — we’re revitalizing that, reinventing it, rejuvenating, energizing it.

Our ability to be relevant in schools will create more fans and kids who want to be mushers, who want to put programs in schools, school teams. I have visions where we do local races at the racetrack so fans can come and watch first graders, third graders, fourth graders do a lap. Not sprint-style racing, but even so, get them exposed to the sport.

Logistically, obviously, with less (mushers) it’s easier to manage the race. We’re still at the lower end. Fifty-two last year, we have 10% more this year. I think we feel comfortable. I think the quality of the pool is extremely good. I’m not sure we’ve ever had a pool as rich as this in mushing skill and talents. We have six former winners. In any event, that’s pretty rare.