After getting stopped by icy overflow, Iditarod’s ‘Elim 11’ is back on the trail and headed for White Mountain 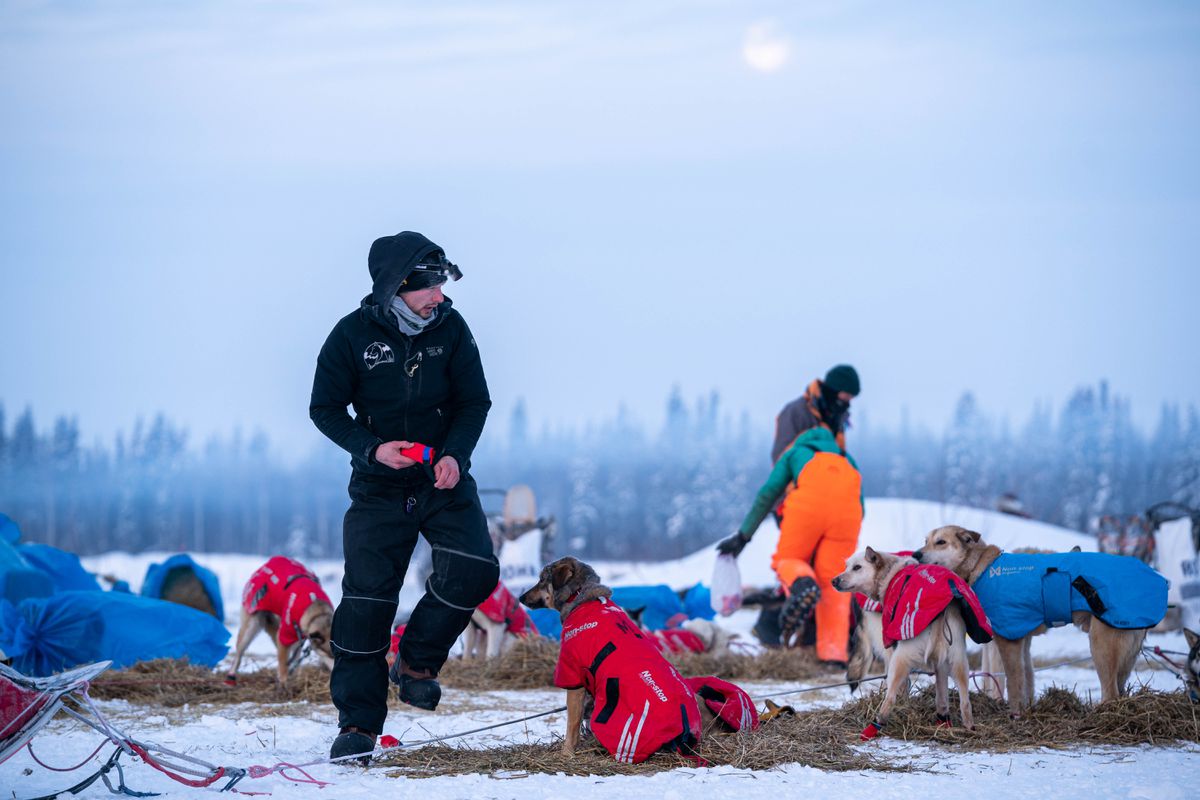 Deke Naaktgeboren, shown here putting booties on his dogs in Nikolai last week, is one of 11 mushers stuck in Elim. (Loren Holmes / ADN)

Deke Naaktgeboren, shown here putting booties on his dogs in Nikolai last week, is one of 11 mushers stuck in Elim. (Loren Holmes / ADN)

UPDATE, 12:30 p.m. Saturday: The Elim 11 hit the trail at 5 a.m. and is closing in on White Mountain. Martin Buser of Big Lake and Grayson Bruton of Willow are leading the way as the group follows local snowmachiners who are breaking trail for the 46-miles journey. Teams could arrive in White Mountain around 2 p.m. Saturday.

Iditarod Trail Sled Dog Race mushers Martin Buser, Deke Naaktgeboren and Riley Dyche reached the Elim checkpoint on Wednesday. On Friday night, they were still there, part of what’s being called “the Elim 11” — the final 11 mushers in the race, pinned down 123 miles from the finish line by wind and overflow.

“An unusual warm front brought in LOTS of water and the trail along the ice is not doable,” said a Facebook post on Buser’s Happy Trails Kennel page.

“With local support, the race teams will leave early tomorrow morning, and will be following snowmachines to Golovin/White Mountain,” officials said by email Friday night.

The group consists of Buser, Naaktgeboren, Dyche, Dennis Kananowicz, Kaci Murringer, Monica Zappa, Damon Ramaker, Laura Neese, Fabio Berlusconi, Magnus Kaltenborn and Grayson Bruton. The last to reach the checkpoint was Murringer, who got there a little before 10 p.m. Thursday.

In a statement issued around 1 a.m. Saturday, the Iditarod elaborated on the plan to get the Elim 11 to White Mountain, and clarified that the race is still on for the 11 teams.

“The teams will be following the Old Mail Trail, which a local trailbreaking team will need to reestablish ahead of the teams, bringing them to the backside of White Mountain. Once in White Mountain, mushers have a mandatory 8 hour layover before heading to Nome,” the statement said.

The 46-mile journey will take hours. From White Mountain, it’s another 77 miles to Nome. Based on run times posted earlier in the race, no one is likely to reach Nome before noon Sunday, and that’s optimistic given conditions have deteriorated since Thursday. On Friday morning, three mushers were rescued by helicopter after hitting deep overflow outside Safety.

The group in Eiim was stymied in its effort to travel Friday.

According to the race’s GPS tracker, they left Elim en masse Friday morning, traveled about 6 miles before stopping for a couple of hours before going back to Elim, a village on the Bering Sea coast.

The group was led by Buser, a four-time winner who has finished all 36 of his previous races. According to the Buser kennel’s Facebook page, the group’s plan was to take the overland mail trail to Golovin.

“There is an ‘established’ trail but it has not been used this year,” the post said. “The snow machines going out front will have to find the trail so the going will be quite SLOW!!!!! Martin says the plan is for them to work together to get everyone to White Mountian.”

The remaining 11 teams in the Iditarod Race are traveling on the overland Mail trail to Golovin. There is an...

Later in the afternoon, there was a new post saying the trailbreakers were thwarted:

“Trail breakers couldn’t find the trail. It was windy up on top but good to get the dogs out for some exercise. The checkers and vets had the checkpoint all tidied up but now (the) crew is back. Dogs are enjoying the fresh straw. Time to regroup and decide what to do tomorrow.”

The Elim 11 have returned to Elim. Trail breakers couldn’t find the trail. It was windy up on top but good to get the...

The Iditarod confirmed that the group retreated to the checkpoint Friday after making an attempt to get to White Mountain, which is about 46 miles away. It said the 11 mushers and their dogs “are safe and in good health.”

Meanwhile, the race reported that the Iditarod Insider crew — which provides race coverage on the Iditarod website — has disbanded and headed home, which for most of the crew means returning to the state of Washington.

“We still have a skeleton crew here in Nome and will be streaming all the other Mushers as they finish and will do our best to provide commentary,” the race posted on its Facebook page.

So far, 23 teams have finished the race and 23 teams have either scratched or been withdrawn. The last musher to finish the race was Lev Shvarts of Willow, who finished in 23rd place at 5 p.m. Thursday.

One of the mushers who scratched was Nic Petit, who ended his race early Thursday when he called for help somewhere between Elim and White Mountain.

Petit was taken to a cabin by Golovin Search and Rescue, and for awhile Friday it looked ilke he was going to wait there until the Elim 11 came through a follow them back to Nome.

In the statement posted around 1 a.m. Saturday, the Iditarod reported that Petit had moved on by himself.

“Nicolas Petit’s team has moved on to White Mountain after all and is no longer waiting in the cabin as we reported earlier today,” the race reported.

Elim 11 plan to move down the trail early Saturday morning. Due to poor trail conditions the group of mushers turned...