Iditarod champion Thomas Waerner is finally back home in Norway, 11 weeks after winning the race 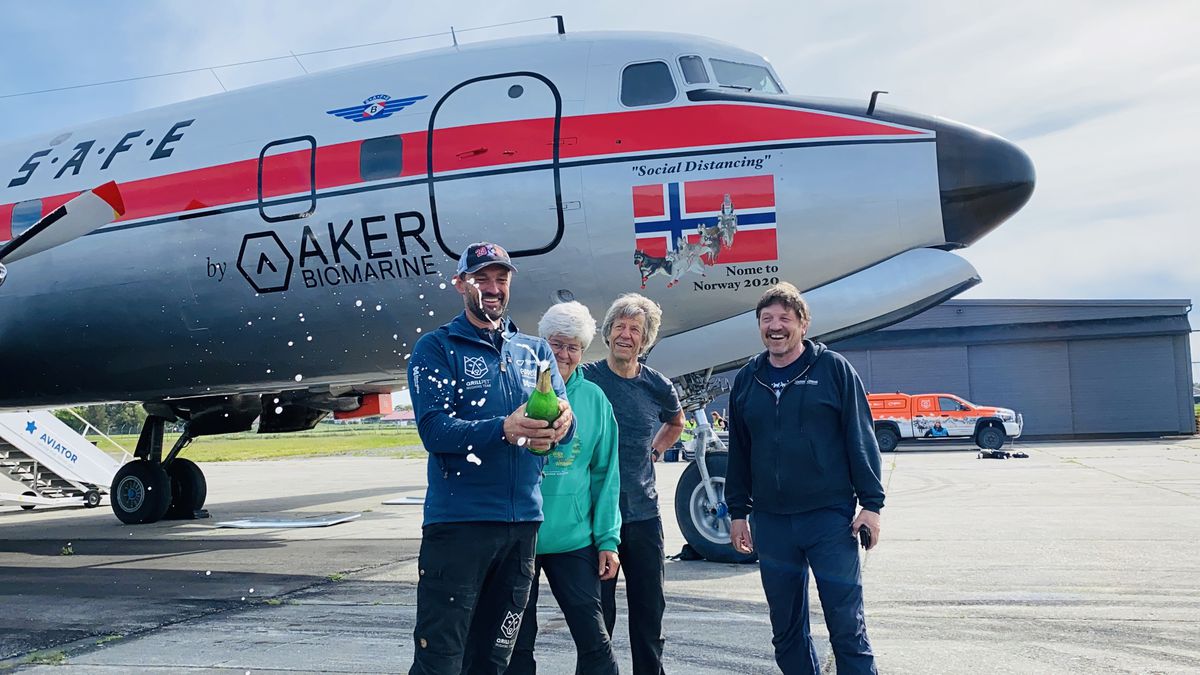 Thomas Waerner celebrates his return to Norway on Tuesday after a 20-hour flight from Fairbanks on a historic DC-6 cargo plane. (Photo provided by QRILL Paws)

Thomas Waerner celebrates his return to Norway on Tuesday after a 20-hour flight from Fairbanks on a historic DC-6 cargo plane. (Photo provided by QRILL Paws)

Eleven weeks after they won the Iditarod Trail Sled Dog Race, Thomas Waerner and his sled dogs are back in Norway.

Waerner and his precious cargo arrived at Stavanger Airport in Sola on Tuesday after a 20-hour flight from Fairbanks in a DC-6 cargo plane. The plane is headed for display at an aviation museum in Norway.

“It’s good to come home. After all, it’s been a long time, and especially when you’re sitting without having a date to relate to,” Waerner said in a report from the Norwegian broadcasting company NRK.

Waerner, 47, won the Iditarod on March 18 and immediately knew he would face challenges going home because of flight cancellations and restrictions during the COVID-19 pandemic.

He was able to spend the extra time in Alaska with friends in the Fairbanks area, including sprint musher Arleigh Reynolds, who welcomed Waerner’s 16 dogs into his dog yard in Salcha.

Ultimately he was able to hitch a ride on a 64-year-old DC-6 the museum acquired from Everts Air Cargo of Fairbanks. The plane, which had been operated by Braathens SAFE of Norway from 1962-73, left Fairbanks early Monday morning and arrived in Norway about a day later.

[More than 2 months after winning the Iditarod, Norway’s Thomas Waerner is still in Alaska, waiting to go home]

“I was allowed to pilot for an hour, so I got (that) ticked off on my bucket list,” Waerner said in the NRK article.

Waerner’s wife, Guro, came to Alaska with Waerner and the dogs in February but left shortly before Waerner reached Nome because flights were being canceled and she didn’t want to get stranded. NRK spoke with her prior to her husband’s flight home.

“I think I'm going to have a heart in my throat when I know he's in the air. I don't think I can fully breathe until he has landed on Norwegian soil,” she said. “It's certainly nothing (more) scary than an ordinary aircraft, but it's just the thought of it being so old and that it's a propeller plane that is a little scary. But things are going well.”

The Waerners live in Torpa and are what Thomas calls “a modern family.” He and Guro each have two children from previous relationships and together they have one. They have three of the kids full-time and two more on alternating weeks, but none were able to make it to Waerner’s homecoming.

“The family did not meet me. 10 hours drive one way,” he said by text.

The dogs — including Golden Harness winners Bark and K2 — traveled in kennels and were allowed out during a brief stopover in Yellowknife. It was unclear if the plane made any other stops.

“The dogs are always relaxed when we make our trips,” he said by text.

Despite this year’s complications, Waerner said he still intends to race sled dogs in Alaska. He’s interested in the Yukon Quest, he said last month, and he wants to do the Iditarod again.