Iditarod still plans to hold a race, but it won’t end in Nome 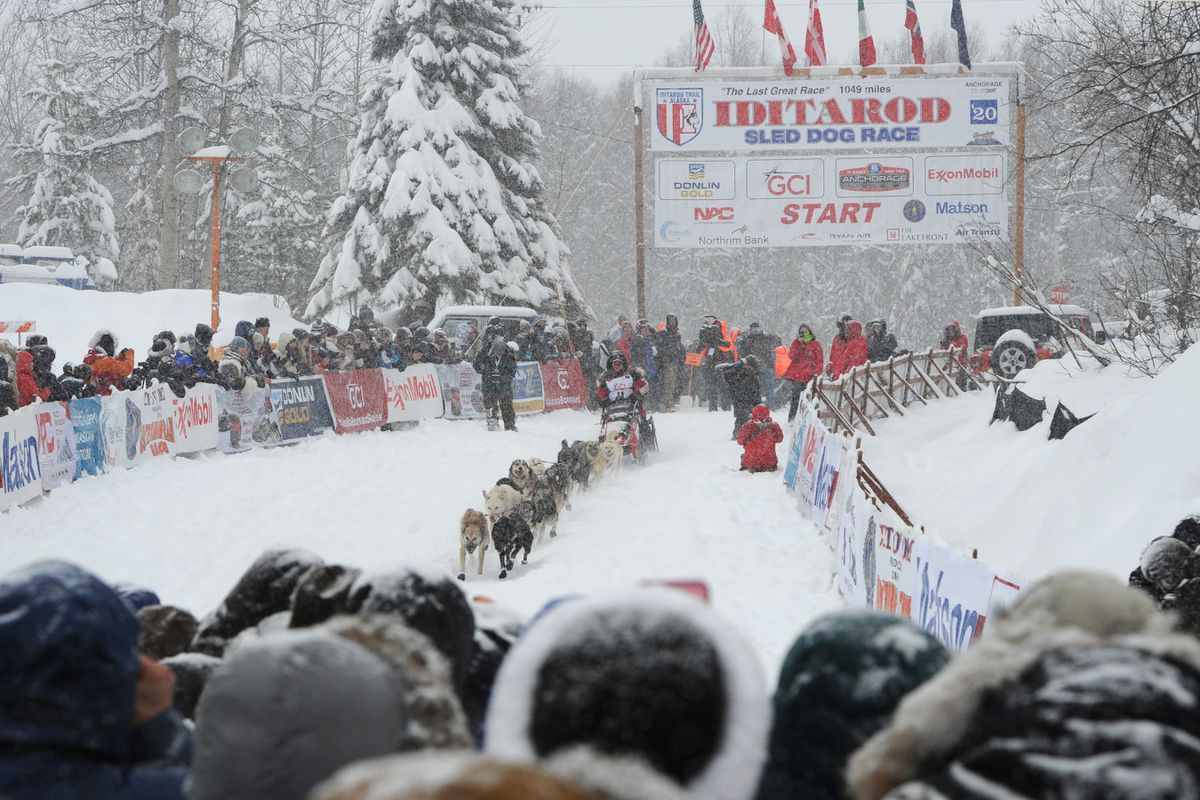 Iditarod veteran Laura Neese and her dog team from McMillan, Michigan, leave the restart of the Iditarod Trail Sled Dog Race in Willow on Sunday, March 8, 2020. Iditarod organizers announced that the 2021 race route will begin and end in Willow. (Bill Roth / ADN)

Iditarod veteran Laura Neese and her dog team from McMillan, Michigan, leave the restart of the Iditarod Trail Sled Dog Race in Willow on Sunday, March 8, 2020. Iditarod organizers announced that the 2021 race route will begin and end in Willow. (Bill Roth / ADN)

The Iditarod Trail Sled Dog Race will follow a revised trail that won’t lead mushers to Nome in 2021.

Instead, mushers will make a round-trip run of about 860 miles that begins and ends in Willow and includes two crossings of the Alaska Range. Dog teams will travel a little beyond Iditarod, the ghost town that marks the midway point of the race’s southern route, before turning around.

Race organizers announced the shorter route on Friday, a day after releasing a COVID-19 plan that includes mandatory and multiple tests for mushers. Anyone who tests positive in rapid tests administered at the start or at the McGrath checkpoint will be removed from the race.

The revised route is about 140 miles shy of the race’s traditional and much-celebrated 1,000-mile distance. It eliminates 13 checkpoints and doesn’t go near the Norton Sound coast or the burled arch that marks the iconic finish line on Nome’s Front Street.

It still includes a ceremonial start in Anchorage on March 6, though how that will work with the city’s COVID-19 mitigation policies remains unknown.

“The Iditarod is working with the Municipality of Anchorage regarding the ceremonial start and will provide updates as they arise,” race organizers said by email.

The Iditarod is traditionally a point-to-point race that begins with the ceremonial start, followed by a restart the next day in Willow. It ends several days later in Nome.

First run in 1973, the Iditarod has started in Fairbanks on a couple of occasions because of poor trail conditions south of the Alaska Range, but the finish line has always been in Nome, which gained fame as a gold rush town and maintains it as the final destination for hundreds of sled dogs and their drivers every March.

“We support the Iditarod’s decision to alter the race route for the 2021 race,” Nome Mayor John Handeland, who is also an Iditarod board member, said in a written statement. “We understand the circumstances and wish they were different. The burled arches in Nome will be ready and waiting for the return of the race in 2022 for the 50th running.”

According to the Iditarod, “the race route will follow a portion of the traditional Iditarod southern race route to the Iditarod checkpoint, and then continue to the mining ghost town of Flat before looping back to the southern route in a course that is approximately 860 miles.”

Many of the eliminated checkpoints are in villages with limited health care resources. The Iditarod said the changes were “necessary for the overall health and safety” of those communities.

Last year’s race was held just as the pandemic was emerging. The village of Shaktoolik opted not to host a checkpoint in town as a result, and race officials urged spectators to not travel to Nome for the finish.

A field of 57 mushers is signed up for the 2021 race. Seven mushers have withdrawn, including defending champion Thomas Waerner of Norway and four-time champion Jeff King of Denali Park.

King said Friday by text that he’s organizing a 200-mile race on the Denali Highway to be held March 12-14 during the Iditarod.

He’s calling it the Ididn’trod 200, and he hopes the Iditarod Trail Committee will approve his request for the race to serve as an Iditarod qualifying race. “I have applied for such and expect it to be approved next week by the ITC,” he said.