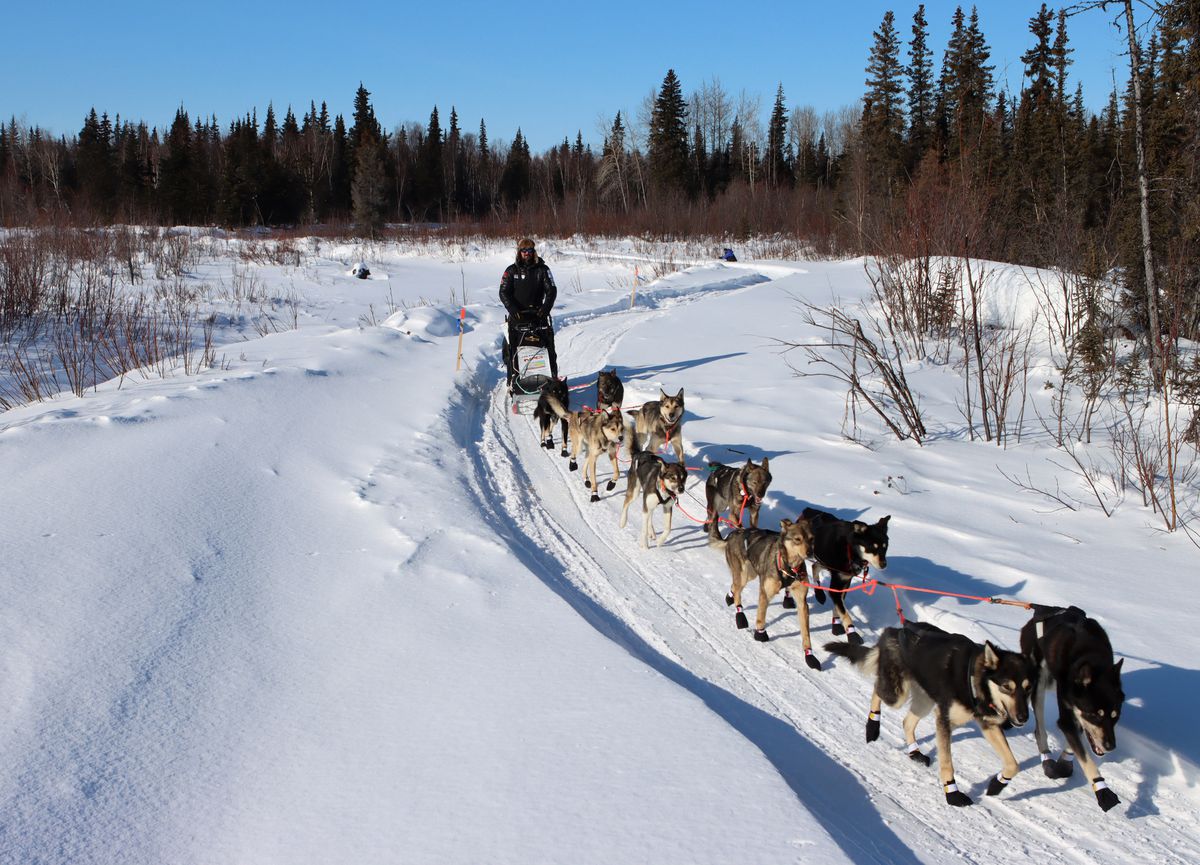 UPDATE, 10:55 a.m. Saturday: Bethel musher Pete Kaiser, the 2019 Iditarod champion, scratched at 9 a.m. Saturday “in the best interest of his race team,” according to Iditarod officials. He had 10 dogs in harness at the time of his scratch at the McGrath checkpoint.

This was his 12th Iditarod; he’s earned six top-10 finishes since his first Iditarod in 2010.

In Ophir on Friday, Kaiser said his dogs were having problems.

Pete Kaiser scratched this morning from the #Iditarod. He'd said in Ophir that his dogs had a bug, and by the time he was in McGrath they were not doing well. He could've finished the race, but didn't count his team competitive. From McGrath, he'll be able to fly home to Bethel.

According to race marshal Mark Nordman, Kaiser, his team and his supplies will be able to fly directly from McGrath to his home in Bethel once arrangements can be made.

Fairbanks musher Riley Dyche also scratched Saturday morning at 8:15 a.m. at the checkpoint of Iditarod with nine dogs in harness.

Saturday’s scratches bring this year’s field of competitors down to 38.

Aaron Burmeister grabbed the lead early Saturday morning by making a brief stop in Nikolai before beginning the long, 75-mile run to Rohn.

Brent Sass also made a brief stop, arriving at 3:17 a.m. and leaving at 3:25 a.m. The race’s GPS tracker indicates that Seavey left not long after Sass.

The only other musher to reach Nikolai by 4 a.m. was Ryan Redington, who got there at 2:35 a.m. in third place. The tracker showed that he was still there two hours later.

UPDATE, 9:30 p.m. Friday: The race is on, and Dallas Seavey has both the lead and a well-rest team.

Seavey left McGrath late in the afternoon Friday, heading south to Nikolai as the race rushes to a finish, at least for the frontrunners.

He left at 5:32 p.m. behind a team of 13 dogs that have so far set a fast pace in the abbreviated race. He was 1 hour and 41 minutes ahead of second-place Ryan Redington, who gave chase at 7:13 with nine dogs in harness.

Seavey and Sass are both coming off eight-hour layovers in McGrath, which means their dogs should be rested and ready to go. Redington and Burmeister, who completed their first two mandatory layovers earlier in the race, each spent a little less than four hours in McGrath.

Everyone takes an eight-hour break at Skwentna, which is 228 miles from McGrath. From Skwentna, it’s another 67 miles to the finish line in Deshka Landing.

A winner is expected Sunday night or Monday morning.

McGRATH — Dallas Seavey, the first Iditarod Trail Sled Dog Race musher to return to the checkpoint of McGrath, is hoping to make the most of his lead and a fast trail so his dog team will be the first to cross the finish line at Deshka Landing.

He pulled into the checkpoint at McGrath at 9:32 a.m. Friday with 13 dogs in harness and planned to take his mandatory 8-hour rest here. He said his run from Takotna to McGrath was faster than he expected, taking about 2 hours.

“This is where the race starts getting run,” Seavey said.

The Talkeetna musher was followed by Brent Sass of Eureka, who arrived in McGrath a little over three hours later, and Wade Marrs of Willow after him. Sass and Marrs still have to take their mandatory 8-hour rest, but Skagway musher Ryan Redington was closing in on McGrath on Friday afternoon with both mandatory rests under his belt.

It was cold at the dog lot in McGrath, which is about 300 miles from the finish. The morning started out at minus-33 in McGrath but had warmed to around minus-20 by the time Seavey was handling his chores.

He doled out meaty soup to his dogs, most of whom ate ferociously from a stand, eagerly taking seconds and then fatty treats like chicken skins. As he rubbed ointment into his dogs’ paws, he spoke for a bit about the run so far and his excitement to race in the last third of the course.

“This portion of coming up is definitely my favorite portion of the race. This is where we actually get to race, finally, after all year of training,” Seavey said. “The first third of the race: getting these guys into a routine and a habit. The second third of the race, putting us into position. Now, the final third, we get to actually do it. So that’s pretty fun.”

This is the first time that Iditarod mushers have followed an out-and-back course, and teams were heading in both directions on the same stretches of trail between McGrath and Iditarod, the race’s midpoint.

Seavey didn’t experience any head-on collisions, but he described “some near-misses.”

“I was really actually quite impressed how smooth all those passes were, and there were a lot, man — it was just one after the next for a while,” Seavey said. “Good thing I didn’t have to take a piss ‘cause there wouldn’t have been an opportunity.”

“The trail was real narrow,” he added.

[Mushers at the Iditarod’s midpoint prep for a new challenge: Head-on traffic]

He felt less of the trepidation some mushers expressed earlier in the race about having to revisit earlier challenging portions of the race route though he had some concerns about the Farewell Burn, where mushers are “at the mercy of the trail.”

“One of the biggest factors in deciding how long to rest is how rough the trail is coming up, and now in this case you know that,” Seavey said. “We can make a pretty educated guess, so I think it’s helping us do a better job of driving our teams.”

All mushers are now being tested for COVID-19 in McGrath a second time, on their return trip, after Minnesota musher Gunnar Johnson tested positive on Wednesday at the checkpoint. The Iditarod’s COVID-19 team is trying to identify two mushers who shared a tent with Johnson the night before he tested positive, and mushers will also have to take a test at Rainy Pass and Skwentna on their trip back to Deshka Landing.

Seavey said he figured that there’d been a positive test result in the race since he was re-tested upon his arrival Friday.

“I didn’t know that it was a musher until just now,” Seavey said. “That’s rough, man.”

OUT OF THE RACE: Talkeetna musher Rick Casillo scratched at 9:59 a.m. Friday in Iditarod “in the best interest of his race team,” according to officials. He had 13 dogs in harness, and his scratch brings the field of mushers down to 40. This was his 10th Iditarod.