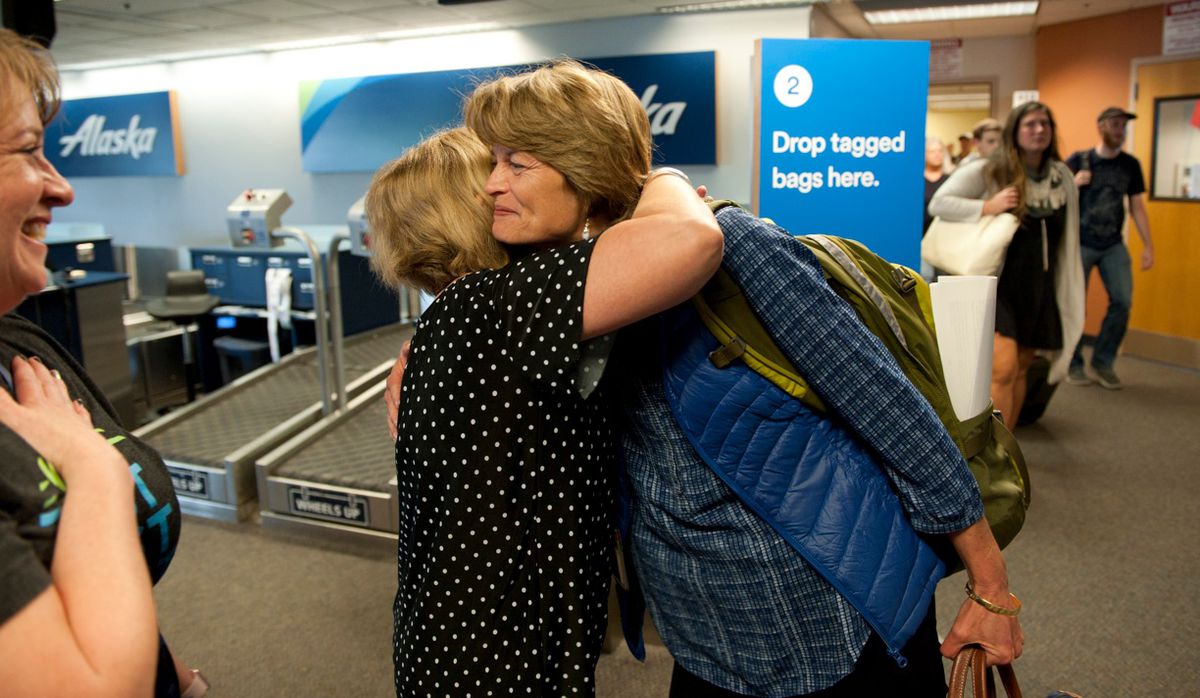 Lisa Murkowski gets a hug from Mandy Odenheimer as she arrives in Sitka Friday afternoon, July 28, 2017.  (James Poulson / Sitka Sentinel)

Lisa Murkowski gets a hug from Mandy Odenheimer as she arrives in Sitka Friday afternoon, July 28, 2017.  (James Poulson / Sitka Sentinel)

Murkowski and Sen. Dan Sullivan, R-Alaska, split their vote in the wee hours of Friday when she joined two other Republican colleagues to stop the GOP's latest legislative effort to undo the Affordable Care Act.

Murkowski, with Sens. Susan Collins of Maine and John McCain of Arizona, voted against a bare-bones bill that Senate leadership promised would be fleshed out and agreed upon later in a House-Senate conference committee.

Murkowski has complained since before the House passed its bill that Republican lawmakers were more focused on getting the requisite number of votes than on writing sound policy.

But despite her "win" on Friday, Murkowski faces an uphill battle in an effort to move Republicans and Democrats toward some kind of bipartisan solution. Already, there is tentative talk in Washington, D.C., of mounting yet another GOP-only effort to pass health care legislation, according to Politico.

In a statement after the vote, Murkowski said she voted no "because both sides must do better on process and substance. She said she remains "committed" to reforming the law by cutting costs and increasing access to health care.

"I hear from fishermen who can't afford the coverage that they have, small-business owners who can't afford insurance at all, and those who have gained coverage for the first time in their life," Murkowski said.

"These Alaskans have shared their anxiety that their personal situation may be made worse under the legislation considered this week," she said.

Murkowski added that she was ready to work with all of her colleagues "to reform health care in a more open process."

McCain similarly released a statement after the vote that lamented a loss of the Senate's "rich history of comity, trust and bipartisanship."

"Our inability to address the pressing health care needs of the American people with meaningful and lasting reform is inexcusable," McCain said.

But, he argued that the failed passage of the Senate GOP's health bills offers "an opportunity to start fresh." He said he hoped the Senate Health, Education, Labor & Pensions Committee would craft a bipartisan bill "that increases competition, lowers costs, and improves care for the American people."

"I encourage my colleagues on both sides of the aisle to trust each other, stop the political gamesmanship, and put the health care needs of the American people first. We can do this," McCain said.

Producing a legitimately collaborative effort will be difficult in the Senate, particularly on an issue that has been the root of so much partisan ire for seven years.

But Murkowski, McCain and Collins made a clear gesture across the aisle last week by refusing to sign off on a process that was orchestrated nearly exclusively among Republicans, in a manner that was rushed compared to the drawn-out process of committee-born legislation.

Any bipartisan effort will not be completed this summer, and would ultimately require meeting a 60-vote threshold to avoid filibuster, sidelining the 51-vote option available under the 2017 budget reconciliation.

At the moment, the left's cup is overflowing with goodwill for Murkowski, McCain and Collins. The question is whether and how that goodwill translates to Democratic leadership in the Senate.

This weekend, Collins is making the rounds on the Sunday talk shows, where she will presumably telegraph her next steps.

McCain will be gone for at least the next month. Starting Monday, he will be back in Arizona receiving treatment for brain cancer, according to his office.

Murkowski had different plans: She flew back to Alaska on Friday, and is spending the weekend fishing with family and visiting constituents in liberal-leaning Sitka.

On Saturday, she tweeted out photos of her visit to Mt. Edgecumbe Hospital, a rural hospital.

Great to visit Sitka and tour Mt. Edgecumbe Hospital. Thanks what you do for fellow Alaskans! pic.twitter.com/9zxLZyH74b — Sen. Lisa Murkowski (@lisamurkowski) July 29, 2017

No longer surrounded by a throng of Capitol Hill reporters, Murkowski sat down with a local radio station to discuss her decision. The Senate GOP bills went "far beyond stabilizing markets," she said, pointing to efforts to alter the scope and structure of Medicaid.

"And we were doing all of this without a committee process, with no discussion with a Democrat on the other side of the aisle. You cannot do major entitlement reform single-handedly. And you shouldn't do major legislative initiatives single-handedly," Murkowski said.

House Speaker Paul Ryan, R-Wis., said he was disappointed by the vote, but urged the Senate to keep working toward a solution.

And several Senate Republicans who voted for the bill Friday nevertheless signaled an eagerness to move to a bipartisan process.

Sen. Bill Cassidy, R-La., has long hoped to broker a bipartisan compromise, and Democrats from Florida and West Virginia said they were meeting with Collins to get moving on new legislation.

And Sullivan, despite being disappointed with his Alaska colleague's decision, has said throughout the process that he is open to negotiations, and open to working with Democrats.

After the vote, Sullivan said his "heart aches" for Alaska families dealing with "skyrocketing costs" of health insurance, whom he pledged to help. But "they should know that I'm not done fighting," he said.

While many on the left may hope the health care effort died on the Senate floor, many of the groups that urged Murkowski to vote no are still hoping for continued negotiations.

Becky Hultberg, president of the Alaska State Hospital and Nursing Home Association, said after the vote that Congress should see it as a chance "to refocus on meaningful health care policy."

"The Affordable Care Act has many flaws, which have been highlighted through this process," Hultberg said.

She expressed gratitude for both Sullivan and Murkowski for having an "open door" to the group's concerns "and for advocating for Alaska."

Murkowski and Sullivan are well aware of the fears of many Alaska lawmakers, who are all too aware of the role federal funding plays in a state that is currently having historic budget problems.

"The last thing we need right now is partisan federal legislation that would shift hundreds of millions of dollars in costs onto the state," said Alaska House Speaker Bryce Edgmon, D-Dillingham.

Rep. David Guttenberg, D-Fairbanks, also urged the pair to continue "working on health care reform." He said that last week's effort in Congress "was just not the way to do it."

American Medical Association president, Dr. David O. Barbe, released a statement saying the group was relieved the Senate legislation was voted down, but still, "the status quo is not acceptable. We urge Congress to initiate a bipartisan effort to address shortcomings in the Affordable Care Act."

But conservatives in the state and Outside were livid at Murkowski's very public step away from the GOP.

FreedomWorks President Adam Brandon called the vote "a slap in the face to every conservative who has been promised that Republicans would repeal 'Obamacare.' " He said Murkowski, McCain and Collins exposed themselves as "frauds."

In a speech on the Senate floor after his disappointing loss, Senate Majority Leader Mitch McConnell, R-Ky., made it clear he expected Democrats to start offering ideas to reform health care.

"It'll be interesting to see what they suggest as the way forward. For myself I can say … that bailing out insurance companies with no thought of any kind of reform, is not something I want to be part of," McConnell said.