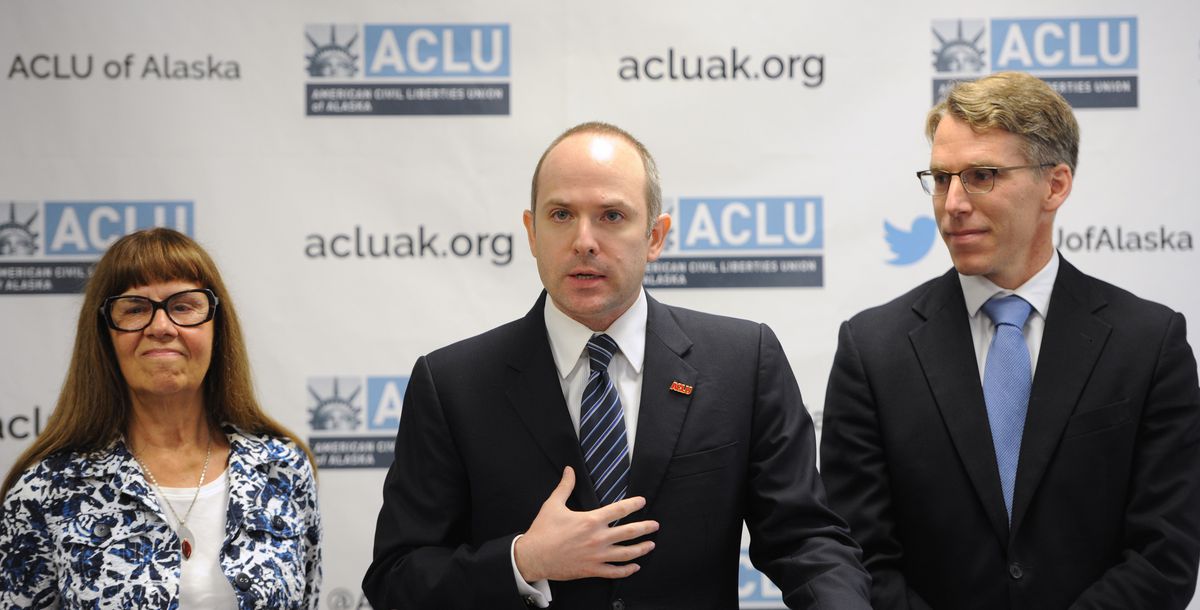 Joshua Decker, executive director of ACLU of Alaska, center, with plaintiffs Bonnie Jack and John Kauffman announced a lawsuit that has been filed against Gov. Dunleavy to reverse his "retaliatory veto of court system funding" on Wednesday, July 17, 2019. (Bill Roth / ADN)

Joshua Decker, executive director of ACLU of Alaska, center, with plaintiffs Bonnie Jack and John Kauffman announced a lawsuit that has been filed against Gov. Dunleavy to reverse his "retaliatory veto of court system funding" on Wednesday, July 17, 2019. (Bill Roth / ADN)

The American Civil Liberties Union of Alaska is suing Gov. Mike Dunleavy over his decision to cut funding to the state court system because of its rulings on abortions.

The ACLU says Dunleavy is retaliating against the courts and seeking to punish them for decisions he doesn’t agree with in violation of the Alaska Constitution and the separation of powers doctrine.

The lawsuit was filed Wednesday in Superior Court in Anchorage against Dunleavy and the state of Alaska. It comes as Alaska’s divided Legislature wrestles with the governor’s $444 million in vetoes to the state operating budget.

The ACLU lawsuit targets one of Dunleavy’s vetoes: a $334,700 cut to the court system budget. That amount, Dunleavy has said, is equal to the amount the state spent on “elective abortions” last year.

His veto followed years of failed attempts by Alaska conservatives to bar the state’s Medicaid program from paying for abortions outside of cases of rape, incest and when the mother’s life is in danger. Each time, they’ve been blocked by the Alaska Supreme Court. Most recently, in February, the court declared two such laws unconstitutional.

That violates the state constitution, says ACLU’s complaint in the lawsuit.

The complaint describes Dunleavy’s veto as an “unprecedented affront to the Alaska Constitution” and a “startling breach” of the separation of powers. His veto was meant to punish the court “for exercising its judicial power” and to threaten the court with further budget cuts for decisions he might disagree with, the complaint says.

“Such actions, if left unchecked, threaten our democracy and the core system of checks and balances,” it says.

Dunleavy’s spokesman on Wednesday did not return a request for comment on the lawsuit.

Bonnie Jack and John Kauffman are also named as plaintiffs in the lawsuit. Jack is a lifelong Anchorage resident and Kauffman is an attorney who also lives in Anchorage, the complaint says.

The lawsuit comes amid a flurry of other legal actions in recent days.

On Tuesday, the Alaska Legislature sued Dunleavy for not sending out the school funding this week that legislators had appropriated in 2018. There are also dueling lawsuits over whether the Legislature is legally supposed to hold its special session in Juneau or Wasilla. In January, the ACLU sued Dunleavy’s administration over the firings of three state employees.