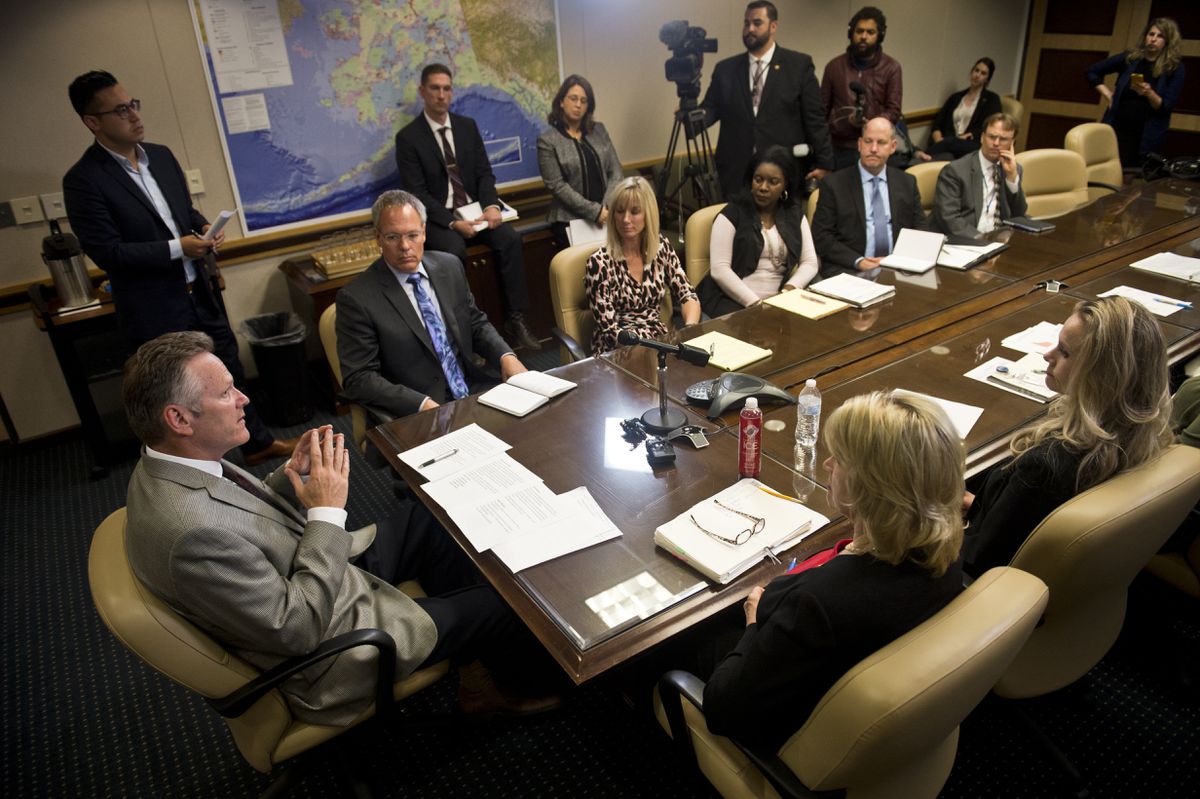 Alaska lawmakers have entered the second week of their ongoing special session still divided by different visions for this year’s Alaska Permanent Fund dividend and state budget, even as concerns about the location of the session subsided with a compromise meeting in Anchorage.

On Monday, one group of lawmakers unveiled new legislation that would fix issues with the state’s capital budget, reverse Gov. Mike Dunleavy’s decision to veto $444 million from the state operating budget, and pay a dividend of $929 per person with the $641 million surplus remaining after state services are funded.

The other group, deferring to the governor’s control of the special session’s agenda, published a letter asking him to add the capital budget to that agenda once lawmakers agree on the amount of this year’s dividend. The issue of the vetoes was left unaddressed, but its authors said in subsequent interviews they could be addressed after the other two items.

Legislators have four tasks: agree on the appropriate location of the special session, approve an amount for this year’s Permanent Fund dividend, finish work on the capital budget (including the “reverse sweep”) and make a final decision on reversing (or not) Dunleavy’s decision to veto $444 million from the state operating budget.

Last week, and continuing Monday, about one-third of the Legislature’s 60 members have met in Wasilla, supporting a special-session proclamation from the governor that calls them into session there. The remaining lawmakers contend that the Legislature’s position as a separate but equal branch of government allows them to select their own meeting location, and with a majority of the Legislature in attendance, convened the session in Juneau.

Lawsuits have been filed on both sides of the issue.

In remarks Monday to news media, the governor said legislative factions were “moving closer together.”

He said compromise wasn’t off the table.

“I realize we all have to come together,” he said. “Which means some movement into the middle, so we can meet.”

Dunleavy did not say what compromises he was willing to make.

“We all realize we’re running out of time,” he said. “We all want a closure to this legislative session.”

Sen. Mia Costello, R-Anchorage and one of those who went to Wasilla, said the location dispute is a side issue.

“We have gone to the governor and said, you know what, if you want to call us into Anchorage or Juneau, we will be there. That’s not the issue here,” she said.

The critical issues, she explained, are budgetary. If the Legislature fails to finish work on the capital budget before the end of the month, the state could lose almost $1 billion in federal highway and airport aid. Within the capital budget, the failure of the “reverse sweep” vote has caused college students to lose scholarships and has endangered, at least temporarily, the state’s subsidy for rural electricity.

If the governor’s operating budget vetoes are unchanged, the state’s senior benefits program will remain unfunded, Medicaid patients will go without dental care, and the University of Alaska will be forced to make extraordinary cuts to its operations. (The university’s board of regents on Monday deferred decisions on those cuts until the end of the month.)

Speaking to reporters, the governor said, “these vetoes, once again, in my opinion, were needed to start the process of right-sizing government.”

He has previously said his goal is to balance the state budget without increasing taxes, cutting the dividend or spending from savings.

Costello said the Wasilla group believes the governor’s special session proclamation is constitutionally and legally valid, so it must be followed. The difficulty is that the only agenda item on that proclamation is the dividend.

The Wasilla group supports following the traditional dividend formula, which calls for a payment of $3,000 this year. Most of the Juneau group does not.

“We need to fund the full amount, but that’s because that’s step one of multiple steps in terms of getting this off our plate,” said House Minority Leader Lance Pruitt, R-Anchorage. Pruitt and Costello signed the letter on behalf of the legislators in Wasilla.

Legislators who originally convened in Juneau are taking a different track. On Monday, members of the House Finance Committee who met in the capital city introduced a new version of House Bill 2001, which was originally written to pay a $1,600 dividend.

The new version calls for a “surplus” dividend — what’s left over after other expenses are paid. As part of the calculation of that surplus, the bill calls for restoring funding to programs vetoed by the governor, funding the capital budget and fixing the reverse sweep. After that, it pays the estimated $929 dividend.

That roundabout approach is necessary to follow the governor’s constitutional ability to control the special session agenda, which only includes the dividend.

“This is, again, a surplus PFD bill, and we had to put the information in there to know what the surplus PFD was,” said Rep. Neal Foster, D-Nome and co-chair of the House Finance Committee, in a committee hearing unveiling the proposal.

The hearing took place in Anchorage, neutral ground between the Juneau and Wasilla locations. Three members of the committee who attended the Wasilla session were present. They voted against considering the idea, saying it strays from the governor’s agenda.

Foster said after the hearing that the bill “is just a starting point. I don’t think there are many people who believe we’re going to have a $929 PFD.”

He called the bill a “means to get past the current impasse” over the budget.

“Maybe in the end we do accept some of the (governor’s) cuts, but without this bill, that’s a nonstarter,” he said.

The attorneys, husband-and-wife team Kevin McCoy and Mary Geddes, are asking an Anchorage Superior Court judge to issue an injunction that prevents Dunleavy from calling the Legislature into session away from Juneau without the approval of the Legislature and are asking that the governor’s “182 line-item vetoes” from this year’s operating budget be put on hold until “the next regular or lawfully proclaimed special session of the Legislature.”

By phone, McCoy said both are retired attorneys who raised their families in Alaska and filed the suit because they care about Alaska. McCoy deferred questions until after a judge decides the suit.

The lawsuit is in the opposite direction from one filed by Anchorage attorney Bill Satterberg on behalf of former North Pole legislator Al Vezey. That lawsuit alleges it is legislators who have convened illegally in Juneau, defying the governor’s special session proclamation.

Geddes and McCoy did not immediately answer phone calls seeking comment, but in a message sent to reporters, they explained that the governor’s choice of Wasilla led more than a third of the Legislature’s members to go to that city and not Juneau, thus denying the Legislature enough votes to overturn the governor’s vetoes.

“The couple says that the Governor’s unlawful directive to the Legislature constituted interference with Legislature process. They want the courts to stop the Dunleavy Administration from implementing its planned budget cuts since the Legislature did not have a reasonable opportunity as a body to review, reconsider or override the vetoes,” the statement said.

McCoy and Geddes have asked the Anchorage judge for a quick argument and ruling; a similar request by Satterberg was denied Friday by a Fairbanks judge.

A group of Alaskans disgruntled by the governor’s budget cuts is delaying the planned start of a petition drive seeking a recall election that could remove the governor from office.

In a statement Monday, the Recall Dunleavy Campaign said it will begin its campaign Aug. 1 instead of Monday, as had been planned. In a statement, the group said “organizers have rescheduled the initial signing event to better accommodate voters who want to support the recall effort.”

Dunleavy told reporters later in the day he’d heard about a nascent “Recall Dunleavy” effort forming in the state, but brushed it off as “all part of politics.”

“Whenever you make difficult decisions and people are involved ... such as these vetoes, this is not necessarily a shock or surprise,” he said. “I believe in public engagement. People have the right to voice their opinion.”

He said he didn’t think the recall effort would ultimately meet the legal standard to proceed.

Organizers said in their press release that they have consulted legal experts to ensure the recall petition meets that standard, which limits the grounds for recall “to lack of fitness, incompetence, neglect of duties, or corruption.”

“I don’t think my actions in following the constitutionally prescribed veto process, in trying to put together a budget that’s going to be sustainable, is going to end up being a grounds for recall,” the governor said.