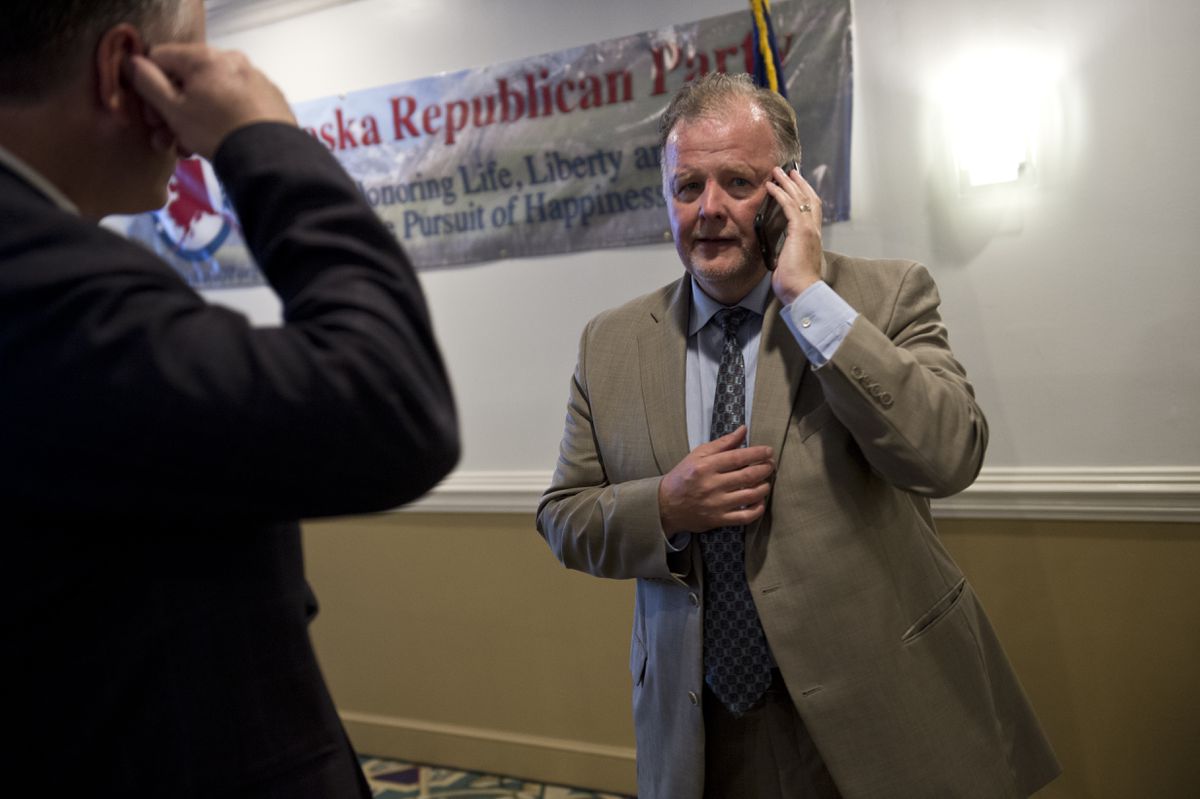 Tuckerman Babcock, chair of the Alaska Republican Party, talks on the phone at the Aviator Hotel on August 21, 2018. (Marc Lester / ADN)

Tuckerman Babcock, chair of the Alaska Republican Party, talks on the phone at the Aviator Hotel on August 21, 2018. (Marc Lester / ADN)

Babcock, who has been the governor’s lead adviser since he took office, was replaced as chief of staff by former state Sen. Ben Stevens at the end of July. Babcock became a “senior policy adviser for strategic affairs," the governor’s office said at the time.

Babcock is the former head of the Alaska Republican Party and has a long history of roles within the party establishment. He did not immediately respond to a message left on his cellphone seeking comment.

According to Babcock’s resignation letter to the governor, which was dated Aug. 22 and released Friday by the governor’s office, Babcock said his “intention was to retire last December, however you asked me to serve first as the chair of your transition team and then as your chief of staff. That was a call to duty I could not decline. It has been an honor to serve. However, I am also dedicated to my wife, eight children, and nine grandchildren, and I wish to once again focus upon them.”

In response to questions, Dunleavy spokesman Matt Shuckerow wrote by email that Babcock made the decision to retire and that he was not asked to retire at this time by anyone in the administration.

In a written statement, Dunleavy offered his thanks to Babcock.

“I thank my friend and colleague Tuckerman Babcock for his steadfast work in leading my transition and early set-up of my administration. His work and contribution to Alaska over these many years is appreciated and will be greatly missed. I wish Tuckerman nothing but the best in retirement and his desire to spend more time with his family and many grandchildren,” the governor said.

Asked whether the administration intends for Babcock to return in another capacity, Shuckerow said he is “unaware of Tuckerman Babcock’s future endeavors, other than he would like to spend more time with his family.”

No one at this time will replace Babcock as senior policy adviser for strategic affairs, Shuckerow said.

He was director of boards and commissions for Gov. Wally Hickel and worked as a legislative aide for three representatives and two senators. He served a three-year term as a commissioner of the Alaska Oil and Gas Conservation Commission and worked for 10 years at Matanuska Electric Association. He has worked on many Republican election campaigns and has served at the precinct, district and state level for the party, rising to become its chairman. He was director of the state’s redistricting board after the 1990 U.S. Census.

Babcock and Dunleavy have been personally sued in federal court by the Alaska chapter of the ACLU, which has alleged they illegally fired state employees for political reasons.

Scott Kendall, who was chief of staff for Gov. Bill Walker before Dunleavy was elected, wished Babcock well and said by phone, “I’ve been in his job. It’s a hard job. I’ll certainly say he probably hasn’t been able to see his family much for the past eight months.”