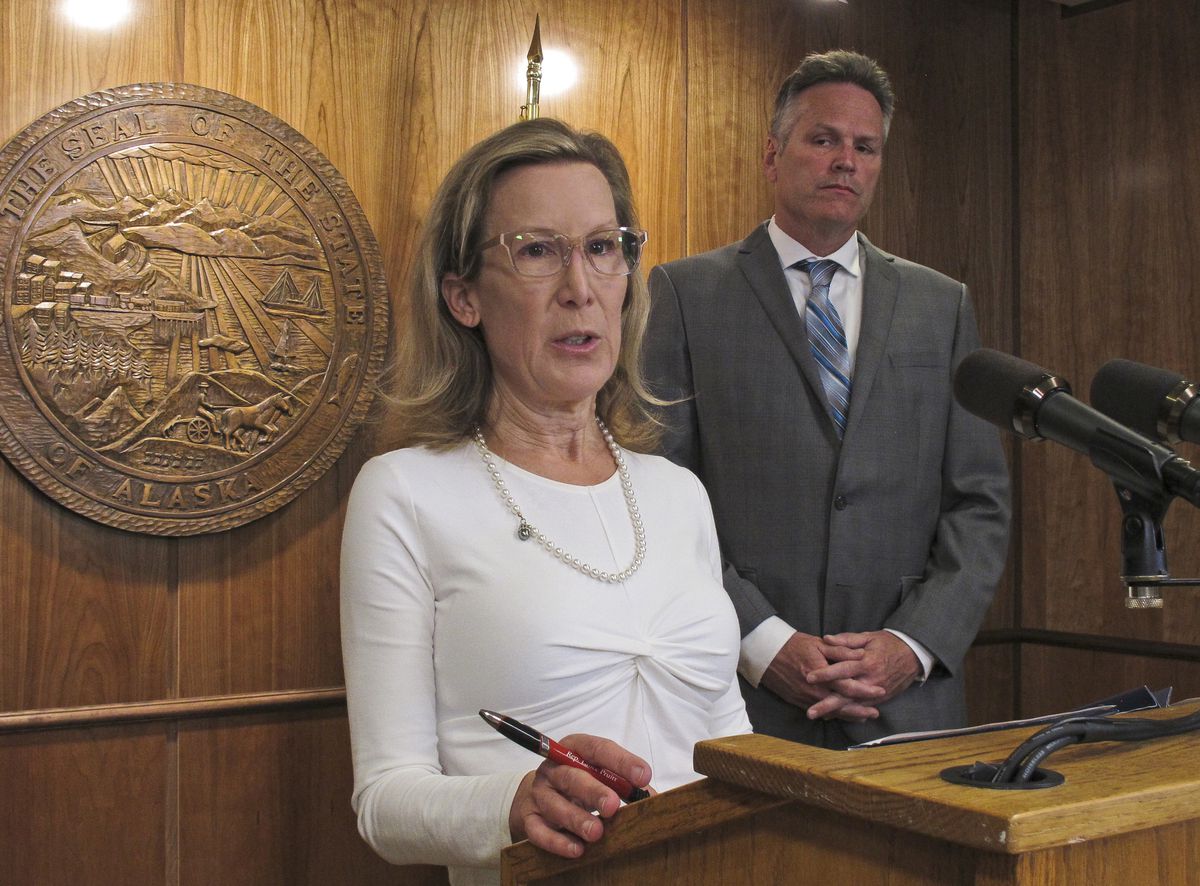 Donna Arduin, director of the Office of Management and Budget, talks about on the governor's state budget vetoes in June, with Alaska Gov. Mike Dunleavy. Friday, June 28, 2019 (AP Photo/Becky Bohrer)

Donna Arduin, director of the Office of Management and Budget, talks about on the governor's state budget vetoes in June, with Alaska Gov. Mike Dunleavy. Friday, June 28, 2019 (AP Photo/Becky Bohrer)

Office of Management and Budget director Donna Arduin will leave her role as Alaska’s top budget official, Dunleavy chief of staff Ben Stevens said Monday. Her job will end Oct. 1, and the state will attempt to hire her as a contractor advising OMB and department commissioners, Stevens said.

Stevens said the terms of Arduin’s contract with the administration have not been agreed on, but the plan is to hire her as an adviser to OMB and state agencies for “performance-based budgeting” and other duties.

“If she decides to continue in the role, it’ll be a reduced position from where she is now,” he said in a call with reporters.

Stevens said Arduin was out of state Monday on personal travel and that she had been given a “two-week notice." Reached by cellphone, Arduin said she remains a state employee through Oct. 1, and until then, questions must go through the governor’s press office. The press office did not respond to an emailed request for an interview.

[Earlier coverage of Donna Ardiun: As Alaska’s budget uproar rolls on, a top Dunleavy adviser has seen it before]

Arduin has been one of Gov. Mike Dunleavy’s top advisers since he took office last year. As the administration’s highest budget official, she became the face of Dunleavy’s push to balance the state’s budget by cutting services rather than increasing taxes or reducing the Permanent Fund dividend.

That push had mixed results in its first year: State spending sharply declined, but the governor was unable to convince the Alaska Legislature to accept a higher dividend, and the governor’s political opponents have mustered enough support to launch a campaign to recall him from office.

Asked whether the change was due to the recall, Stevens said, “No, I don’t think it does at all.”

He said that Arduin’s skills were valuable during the administration’s first year, but the governor’s commissioners now have a year of experience and the skills needed to manage the state budget.

“It’s just an evolution of the process,” he said.

Dunleavy spokesman Matt Shuckerow wrote by email that the administration has not reversed an action to consolidate budgetary control within OMB.

Laura Cramer, OMB’s deputy director, will serve as interim OMB director, Stevens said, with a permanent replacement to be named later. He said Arduin will not receive a severance package.

Sen. Natasha von Imhof, R-Anchorage, said she hopes whoever replaces Arduin will try to provide “a more holistic view and explanation of not only the cost of the goods and services provided by the state, but their value and economic impact to Alaskans.”

Sen. Mia Costello, R-Anchorage, said she considers Arduin a friend. The pair were among a group of legislators, staffers and others who played water polo together when the Legislature convened in Juneau.

“My impression is that she was always very professional and did what the governor asked her to do, which was present a budget that was balanced,” Costello said.

She and other lawmakers believe Arduin’s departure is the result of “friction” between two groups in the governor’s office.

Those groups, she said, are “those who were focused on coming through with the campaign promises vs. those who felt that the landscape was more challenging than that and maybe there wasn’t support for that.”

“Your chief of staff and your budget director is pretty much your top two people,” said Sen. Bert Stedman, R-Sitka, adding that “there’s been a change at the top of the executive branch.”

“One would conclude that they’re trying to smooth out some of the bumps they’ve run into,” he said.

Von Imhof said the true test of that theory will come on Dec. 15, when the governor unveils his budget proposal for the coming year. If that is significantly different from the budget he released in February this year, it would signify a change in course.

“The question remains: What is the administration’s set of values now, or have they changed in the last year, and what is that budget going to look like?” she said.