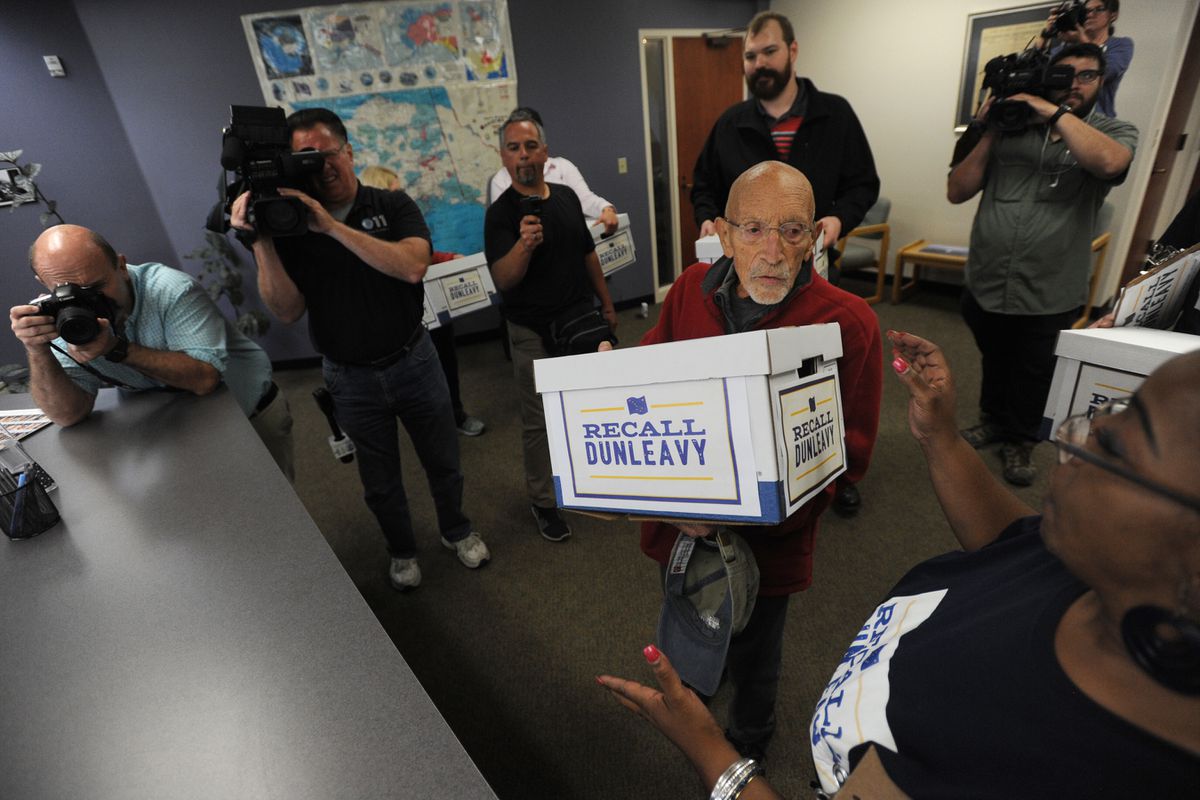 Vic Fischer, center, a former state senator and delegate to the 1955 Alaska Constitutional Convention, helped as the Recall Dunleavy campaign submitted 49,006 signatures to the State Division of Elections in Anchorage for review and certification on Thursday, Sept. 5, 2019. (Bill Roth / ADN)

Vic Fischer, center, a former state senator and delegate to the 1955 Alaska Constitutional Convention, helped as the Recall Dunleavy campaign submitted 49,006 signatures to the State Division of Elections in Anchorage for review and certification on Thursday, Sept. 5, 2019. (Bill Roth / ADN)

The campaign to recall Alaska Gov. Mike Dunleavy on Thursday said it submitted an application with 49,006 signatures to the state, a step required to obtain certification before a second, bigger campaign drive can begin.

Recall organizers dropped off seven boxes to the Division of Elections office in Anchorage and said the submitted signatures are well over the 28,501 signatures of registered voters required to file the application. The extra signatures gives the group a big cushion in the event some signers are disqualified.

Vic Fischer, a former Democratic state senator and delegate to the 1955 Alaska Constitutional Convention, turned in the application paperwork. He called the campaign the most “phenomenal outpouring of citizenship” he’s ever witnessed in Alaska.

“It’s unbelievable it took one month to do it,” said Fischer, a spearhead of the effort with Joe Usibelli, chairman of Usibelli Coal Mine and Arliss Sturgulewski, a former Republican state senator from Anchorage.

The first-round signature drive advanced rapidly compared to an effort that reached this stage in 1992. The campaign to oust then Gov. Wally Hickel and Lt. Gov. Jack Coghill needed a year to collect roughly 20,000 signatures to complete the first round of signature-gathering at that time. That effort later fizzled, and Hickel and Coghill remained in office.

The Recall Dunleavy effort began Aug. 1 after the governor’s decision in late June to veto more than $400 million from the state operating budget, a move that economists warned would lead to thousands of job cuts, widespread cuts to services, and push Alaska back into recession.

After the Legislature overrode many of those cuts, the governor agreed to protect some funding but repeated more than $200 million in vetoes to the operating budget.

[Here’s what the governor cut, and what was restored, in Alaska’s state operating budget]

The governor’s office did not immediately provide a comment Thursday about the recall effort.

Dunleavy’s office has previously said the governor “was elected as an agent of change, refusing to accept the status quo and keenly focused on addressing the challenges the many before him have been unwilling to tackle," according to a statement provided by Matt Shuckerow, the governor’s spokesman.

“While some will focus on political gamesmanship, Gov. Dunleavy’s administration is focused on empowering Alaskans through the agenda he ran on, including addressing Alaska’s unsustainable budget, improving public safety, growing the economy, fighting for pro-business policies, and championing a full statutory PFD," the statement said.

A crowd of about 100 recall supporters marched the signatures a short distance to the elections office from the parking lot of the Cook Inlet Region Inc. headquarters.

Barbara Donatelli, CIRI’s senior vice president, walked with the group. She said CIRI has not had second thoughts about its support after the governor reduced his vetoes.

“Even though he backed off a little bit on some of the vetoes, the lack of leadership and policy issues he has proposed were not in the best interest in the state,” she said.

Once the recall application is turned in Thursday, the ball is passed to the elections division, which verifies whether its signatures belong to registered voters.

The division also confirms that the reason for the recall is legal. Unlike with a ballot measure, there is no set timeline for the division to make that decision.

In a legal memo provided to reporters, recall backers cited prior practice and said that any delay past Oct. 7 “would appear to deny the recall sponsors timely exercise of their constitutional rights.”

Division of Elections director Gail Fenumiai wrote in a statement emailed to reporters Thursday that “the Division will be applying the same level of due diligence to this application as has been the case with all applications.”

She said the division has asked the Department of Law — which advises the Division of Elections on the legality of recalls, among other duties — to take no more than 60 days for its legal review.

“This timeframe provides both the Division and the Department of Law a reasonable amount of time for verification of the signatures and a thorough legal review. As this recall involves a statewide elected office, and not a House or Senate district, the review process is expected to take longer to verify the signatures, let alone the legal review,” the press release stated.

“I see no need to treat this application any differently than other election applications,” Clarkson said. “I am here to provide legal advice and defend and uphold the state and federal constitutions. The Department of Law will advise the Division of Elections in the same manner it would any other recall. And 60 days will give us adequate time to do a thorough legal review and provide our legal recommendation to the director.”

If the petition is certified and survives potential legal battles, the organizers must complete a second round of signature-gathering, this one requiring 71,252 registered voters to sign, or 25% of the number of voters in the last general election.

The signatures gathered in Round 1 don’t count toward the second round. The group will ask people who signed the first time to sign again, and will look for additional signers, said Meda DeWitt, with the recall effort.

She called the roughly 49,000 signatures a symbolic but unplanned outcome for Alaska, the 49th state to join the U.S. She said signatures were collected in more than 100 communities around the state.

If approved for the ballot, the petition language would go before voters in a special election.

Despite multiple attempts to recall governors, only two campaigns in U.S. history have succeeded: California Gov. Gray Davis in 2003 and North Dakota Gov. Lynn J. Frazier in 1921, according to the National Conference of State Legislatures.