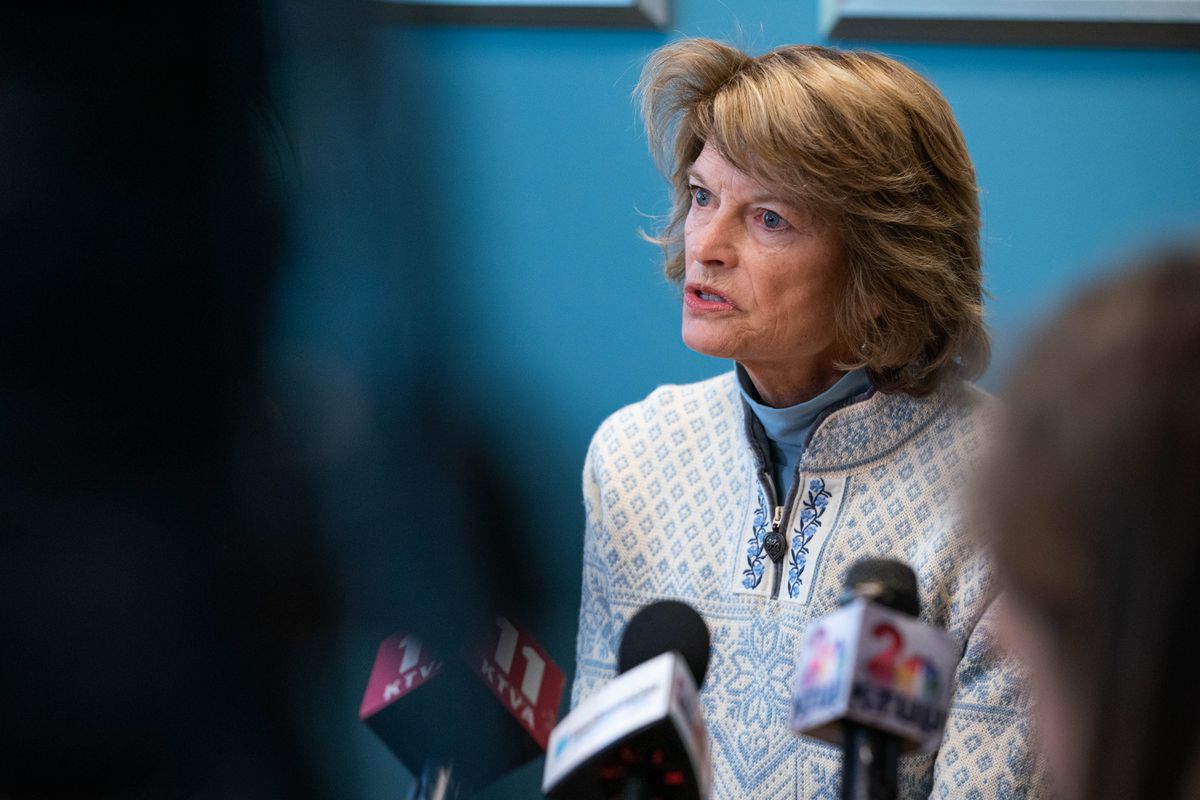 Days away from the presidential impeachment trial, Alaska’s senators said this weekend they are hoping for a fair process and that they’d wait until later in the proceedings to decide whether or not to call for more information.

Sen. Lisa Murkowski, R-Alaska, said Saturday that she’s approaching the proceedings, which begin in earnest on Tuesday, with an open mind. Sen. Dan Sullivan, R-Alaska, told the Daily News by phone Friday evening that he believes the Senate trial will be a contrast to the actions taken in the House of Representatives that led to the drafting of articles of impeachment last year.

Murkowski told reporters in Anchorage that she’ll wait until the second phase of impeachment proceedings to decide whether she needs more information, after the House managers, essentially prosecutors, and the president’s defense team both present their arguments and give senators a chance to ask questions.

“I don’t know what more we need until I’ve been given the base case,” Murkowski said.

Murkowski noted that others have said the House’s impeachment proceedings were flawed and criticized the Senate for taking up impeachment at all.

“You may disagree with how we got here,” Murkowski said. “But the fact of the matter is articles have been transmitted. Our role in the Senate is then to move through a court of impeachment.”

She noted swearing an oath to deliver “impartial justice,” and told reporters that she remained committed to listening openly throughout the proceedings.

Murkowski said she would “listen fairly to both sides of the matter,” as both the managers from the House and the president’s team make their cases, during the first phase of the proceedings set to begin Tuesday.

Murkowski said she’s anticipating Senate Minority Leader Chuck Schumer, D-NY, will attempt to include rules that would initially secure “certain individuals be teed up as witnesses,” as the senators try to draw up rules, what’s known as an “organizing resolution,” on Tuesday.

Then, at that point, after senators are given a chance to pose their questions to both sides, she would determine if she needs more information.

She said it’s also possible the two sides would present enough information to not need anything more during the second phase.

Murkowski drew national attention in late December when she told Anchorage TV station KTUU she was “disturbed” by Kentucky Sen. Mitch McConnell stating he planned to work in “total coordination” with the White House during the impeachment proceedings.

When asked about the perception that she is a swing voter, Murkowski said she knows that others see her that way and thinks it’s because she has said she plans on going into the impeachment process “without any preconceived outcomes."

“So this is not a new role for me,” Murkowski said. “It’s not a role that I relish, though.”

Murkowski, who has held office since 2002, has occasionally diverted from President Trump and other Republicans in Congress.

In July, Murkowski criticized the president after he remarked that four Democratic minority congresswomen should “go back” to their countries.

“There is no excuse for the president’s spiteful comments – they were absolutely unacceptable and this needs to stop,” Murkowski wrote in a July Facebook post.

[Sen. Murkowski: ‘No excuse’ for Trump’s comments about Democratic lawmakers]

Murkowski also opposed the president’s controversial Supreme Court justice nominee, Brett Kavanaugh, drawing criticism from the president, who said she wouldn’t survive her re-election in 2022, The Washington Post reported at the time.

In a meeting with Daily News staff members Saturday afternoon, Murkowski said the last time she talked with the president was after he had reportedly told a group of people at an event that he thought the senator hated him at the end of last year.

“He was just kind of off the cuff and he said, ‘I don’t know, I think Lisa Murkowski hates me. I kind of like her,' ” Murkowski said of the president’s comments.

So, she said, she called him.

A couple scenes from POTUS event tonight: He asked if Sen. Lisa Murkowski was there and she wasn’t. “She hates me. I kind of like her but she really doesn’t like me. We do so much for Alaska you’d think we’d get her vote for something one of these days,” POTUS said.

She caught him on a Friday night before the holidays, she said.

“And I just said, 'Hey, sir, you know, there's all this stuff out there that you think I hate you,” Murkowski recalled.

She told him yes, sometimes she disagreed with him and she’s not afraid to voice that disagreement, but that didn’t mean she hated him.

She told the president she didn’t want him going to bed on a Friday night thinking that the senator hated him.

They went on to talk about Alaska for 10 minutes and then she told the president she didn’t have anything else to talk about.

“I think it’s important to recognize that you can have policy disagreements," Murkowski said. "You can not like the way somebody has said something. But these are people that we work with. And relationships do matter.”

Murkowski viewed GAO report ‘with a little bit of concern’

On Thursday, the Government Accountability Office, a watchdog agency that provides reports to Congress, concluded that the Trump Administration had broken the law when it directed the Office of Management and Budget to withhold security aid from Ukraine last year.

When asked about the GAO report, Murkowski said it reminded her of when she and others voted against President Trump in his pursuit of emergency border wall funds last year. She said during that debate, she “maintained that the president couldn’t take funds that had been congressionally directed in one area and use them to advance his own policies."

She said the GAO report was something she “looked at with a little bit of concern,” and emphasized the importance of respecting Congress’ role in appropriating funds.

Speaking by phone Friday evening, Alaska’s other senator, Dan Sullivan, noted many of the bills passed by the Senate the previous week and the expected slow-down that impeachment would have on the Senate’s work.

“All of that progress is going to come to a grinding halt as we take up impeachment,” Sullivan said.

He said he’s been an advocate of adopting the same rules as the impeachment of President Bill Clinton in the 1990s, giving President Trump a “fair and balanced” process. Under those rules, he said, the determination of whether or not to bring witnesses would happen in the second phase.

“I think this is going to be a stark contrast to what happened over in the House where you literally witnessed the most rushed most partisan and unprepared impeachment proceedings in the House in U.S. history," Sullivan said.

Sullivan said he hadn’t read the GAO report because his primary focus is what’s contained in the articles of impeachment that were delivered to the Senate last week. He did note that previously the GAO concluded the Obama administration had broken the law at certain points as well.

“The impeachment is focused on the articles,” Sullivan said. “That’s the way the Constitution and the impeachment process will work starting on Tuesday.”

Sullivan also voiced concern that impeachment was becoming a tool of partisanship. He said that throughout the process, he wouldn’t just be looking at the facts presented, but also the type of precedent the impeachment proceedings might set for the future.

“One of the big issues that I think every Alaskan, every American regardless of party should be focused on is whether impeachment is now going to become a regular tool of partisan warfare trotted out every couple of years in the House by Democrats or Republicans in a partisan way,” Sullivan said.

Both Murkowski and Sullivan drew national attention during the 2016 presidential campaign when they called for Trump to drop out of the race after a video was released in which he boasted in vulgar language about forcing himself sexually on women.