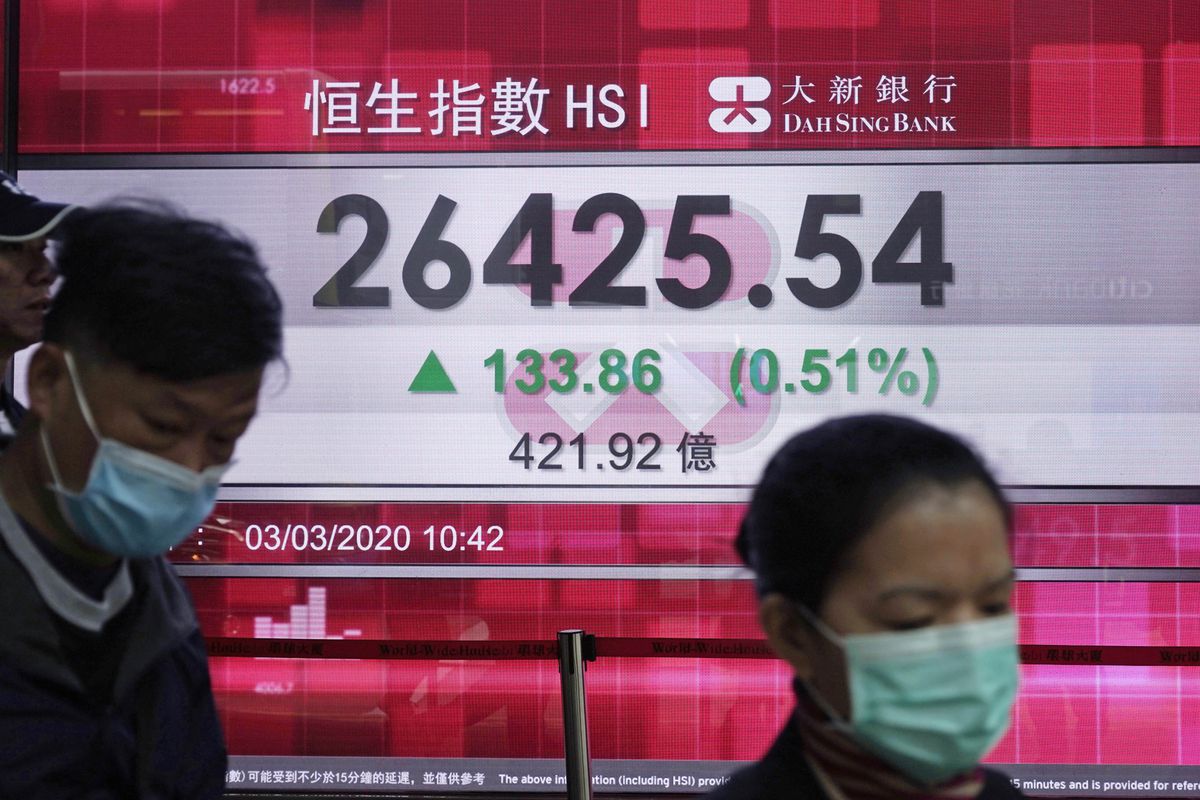 People walk past an electronic board showing Hong Kong share index outside a local bank in Hong Kong, Tuesday, March 3, 2020. Asian shares are higher amid hopes central banks will act to shield the global economy from the effects of the coronavirus outbreak. (AP Photo/Kin Cheung)

People walk past an electronic board showing Hong Kong share index outside a local bank in Hong Kong, Tuesday, March 3, 2020. Asian shares are higher amid hopes central banks will act to shield the global economy from the effects of the coronavirus outbreak. (AP Photo/Kin Cheung)

JUNEAU — The Alaska Permanent Fund lost $2.8 billion, or about 3% of its value, during a coronavirus-driven stock market slump last week, intensifying budget debates in the Alaska Legislature.

Public officials downplayed the impact of the dip and markets rebounded somewhat on Monday. But the virus has also led to a slump in the price of crude oil — the No. 2 source of revenue for Alaska’s state government — and state legislators say that is a cause for concern.

“This is not only affecting our earnings in the Permanent Fund … it’s affecting our other major source of income, which is oil revenues,” said Rep. Jennifer Johnston, R-Anchorage and co-chair of the House Finance Committee.

“This week, I would call the week of hope and prayer, and we’re very conscious of (oil prices) while we’re doing the budget,” she said on Friday.

This month, the Alaska Department of Revenue will revise its oil revenue forecast for the fiscal year that starts July 1. That’s a critical figure, since it determines how much money the state has available to spend.

While the Alaska Permanent Fund has surpassed oil as the state’s No. 1 source of revenue, oil remains No. 2. In December, the state forecast that it would have $3.1 billion in Permanent Fund revenue and $1.9 billion from oil.

This week, the House of Representatives is debating a $4.45 billion state operating budget. The state’s capital budget hasn’t been drafted yet, but is estimated to be between $100 and $300 million. The capital budget is used to fund construction and renovation projects statewide.

The Permanent Fund dividend hasn’t been set either. Gov. Mike Dunleavy has proposed spending $2 billion on the annual payout. Many legislators have proposed lower amounts, but there is no agreement.

[As budget debates begin in earnest, Alaska’s Legislature and governor are struggling to make cuts. And there’s little talk of new revenue.]

Permanent Fund Corporation CEO Angela Rodell said on Monday that even with last week’s decline, she doesn’t expect to have a problem transferring $3.1 billion to the state treasury.

In 2018, the fund lost $3 billion in a two-and-a-half-week February slide, but it had recovered more than its losses by June that year.

Markets were on the rebound Monday and the fund is taking advantage of the slump to use some of its cash reserves to buy low for the long term, Rodell said.

“We invest for a very long-term time horizon,” she said.

Dunleavy said on Monday that stock markets “go up and down for a whole host of reasons.”

“The virus itself has not changed any aspect of our approach to the budget,” he said.

Oil prices remain a greater concern for the Legislature because the issue is out of lawmakers’ hands, and because those prices affect the amount of savings the state has available.

In February, Dunleavy suggested balancing the budget and paying a traditional Permanent Fund dividend with forecast revenue and $1.5 billion from the state’s biggest remaining savings account, the Constitutional Budget Reserve.

At the time, it was forecast that the reserve would have $2 billion, enough to cover that request if legislators wished. But the state’s budget for the in-progress fiscal year — the one that ends June 30 — is based on oil at an average price $63.54 per barrel.

That budget, approved by lawmakers and the governor last year, automatically drains the budget reserve if oil prices miss the mark. So far, the average is 26 cents per barrel below forecast, and production is 2% off the forecast, exacerbating the miss and increasing the amount spent from the reserve.

“We would be very foolish to think we’re near the end of it, and this could go on for some time,” said Rep. Chuck Kopp, R-Anchorage.

The governor and lawmakers are also dipping into the reserve to cover wildfire costs, Medicaid, ferry repairs, and the state’s response to the coronavirus.

“We have a revenue cap this year, and we only have X amount of money to do our budget with,” Johnston said.

The governor and some legislators have said they support breaking that cap in order to pay a supplemental Permanent Fund dividend, but on Monday, the House voted 24-15 on a resolution that indicates opposition to that idea.

“I hope Alaska is paying attention,” she said.