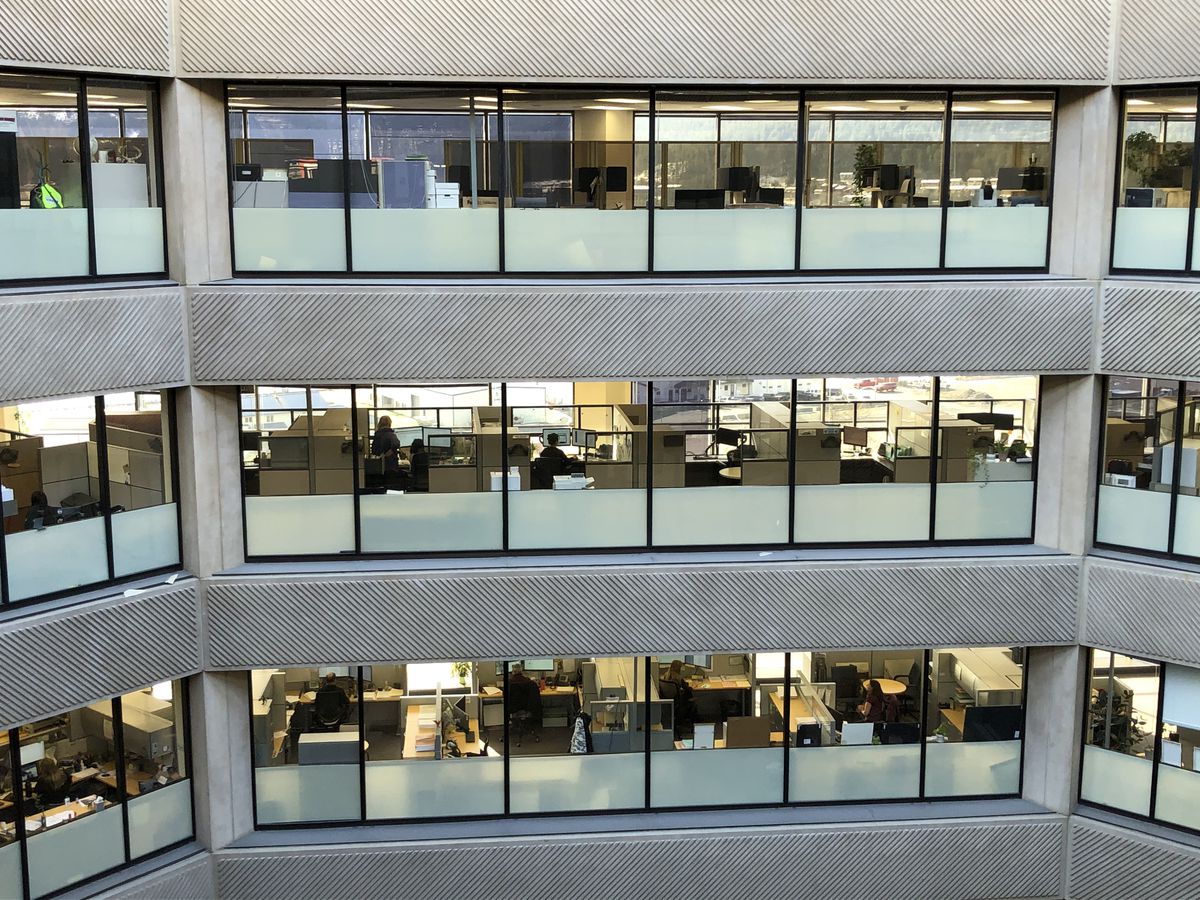 State employees work at their cubicles at the State Office Building in Juneau on Tuesday, March 17, 2020. (James Brooks / ADN)

State employees work at their cubicles at the State Office Building in Juneau on Tuesday, March 17, 2020. (James Brooks / ADN)

JUNEAU — As restaurants, bars, gyms and other public venues beyond Anchorage prepared to close or limit business on Wednesday, state offices remained open amid the coronavirus pandemic.

There is no unified state strategy when it comes to office closures and telecommuting. Individual supervisors and agencies are in charge of decisions, and while some employees are now working from home, the switch hasn’t been universal.

Several workers across the state said they are scared and confused, because the state’s offices aren’t following an order affecting private businesses. On Tuesday, the governor ordered all bars and restaurants to temporarily halt dine-in services, and entertainment venues to close through the rest of the month.

Some state workers unfavorably compared state officials to those at the Municipality of Anchorage, which has been more proactive.

“What’s frustrating is that we’re on the front line. Our front desk is open. The Atwood Building is open. The public has 100% access to our office,” said Jasmin Bautista, who works for the state division that handles business licenses.

“It’s a little frustrating — no, not a little — it’s a lot frustrating,” said an employee of the state’s tax division who works in the Atwood Building. She said she suffers from asthma but has been unable to get permission to telecommute.

She said employees have been deterred from speaking up by the fear that they will be fired or punished for speaking out.

The commissioner of the Alaska Department of Health and Social Services said the state’s cubicle farms provide the “social distancing” recommended by the Centers for Disease Control and Prevention.

“If it is providing you 6 feet of space away from your co-workers, that is a safe place to be," he said.

Bars and restaurants didn’t have a way to keep people 6 feet apart, he said, which is why restrictions were placed on those businesses.

“I do feel that they have been incredibly receptive to health care advice,” she said.

Alicia Hughes-Skandjis is a state employee and a member of the City and Borough of Juneau Assembly. She also has a medical condition that makes her vulnerable to infection.

On Wednesday, she visited the doctor for a note she said she needed to get approved for work from home. She said the state’s policies vary from division to division, not just department to department.

Employees and supervisors said the state is struggling to balance the need for public services and the need to protect workers.

“It’s important that we keep state government working as much as possible,” Zink said.

In Ketchikan, where the borough attorney announced his coronavirus diagnosis on Facebook, Joey Tillson of the Division of Public Assistance said her kids asked her why she was still working. Schools have been closed, and they’re at home.

Tillson said that though she worries about her own health, the division has a backlog of 15,000 public assistance applications, and the coronavirus-caused economic slump means it’s about to get even more people seeking help.

“I know some of our employees want us to close our offices to the public,” wrote Doug Vincent-Lang, commissioner of the Department of Fish and Game, to his employees. “As public employees, we are here to serve Alaskans, and for now, our offices remain open.”

In a letter to the Alaska Department of Administration, state lawmakers requested “immediate and decisive action” to protect employees.

“State employees are at significant risk, and we must not allow state institutions to serve as vectors for this virus,” the letter stated.

Christina Bond said state workers in Anchorage feel frustrated when they compare the state response to that of the municipality, which has encouraged employees to work from home, has staggered work shifts to avoid person-to-person contact, and has closed offices to the public.

“As state employees, we see the mayor doing that for his employees,” she said.

• Offices of the Department of Motor Vehicles remain open, as do Fish and Game offices.

• State public assistance offices closed to the public on Wednesday, according to fresh notices taped to their doors. Help was still available by phone and email.

• The Fairbanks office of the Permanent Fund Dividend division closed to the public after two cases were identified in that city. It continues to take applications by phone, email and dropbox. Other PFD offices remained open statewide with some restrictions.

• Some state unemployment offices said they were closed to the public, accepting calls and emails only. Others remained open.

• The state Division of Retirement and Benefits closed its offices to in-person customer visits on Monday. Staff are still answering questions and solving problems by teleconference.

Telecommuting requires the approval of a supervisor, according to state guidelines updated in January, and not all managers have been willing to grant it.

“It’s really frustrating and stressful and causing employees to be anxious because there’s really no consistent message — if there’s a message,” said Jake Metcalfe, director of the Alaska State Employees Association, the state’s largest public-sector union.

Given the governor’s mandates to close some private businesses, why are state offices still open?

“The governor will make the decision on closing state offices,” Turner said Monday.

Correction: This article has been updated to correct the status of the Fairbanks PFD office. In addition, Alicia Hughes-Skandjis was not previously denied permission to telework.