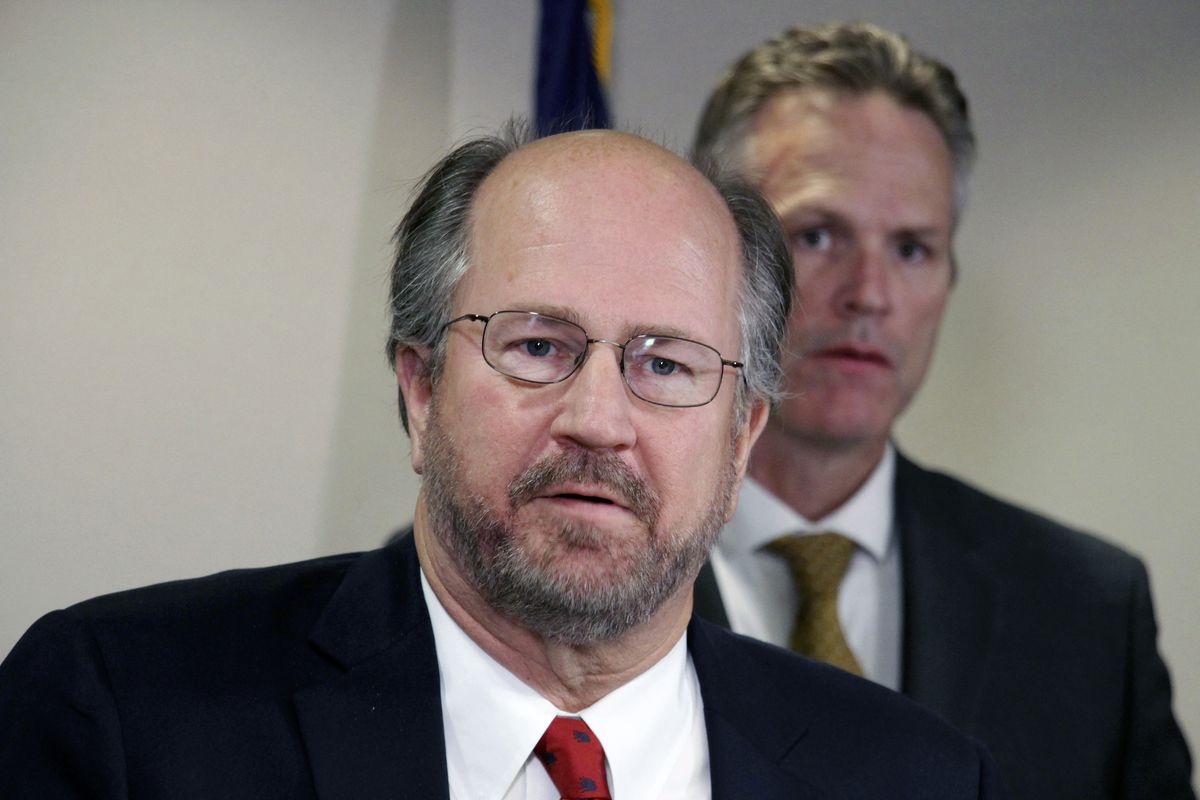 This article was produced in partnership with ProPublica as part of the ProPublica Local Reporting Network.

Prior to his resignation, Clarkson had quietly been placed on unpaid leave for the month of August. Records obtained by the newsrooms show the junior state employee raised concerns about 558 text messages that Clarkson sent to her personal phone in March. Over a 27-day span, the attorney general asked the woman to come to his house at least 18 times, often punctuating the messages with comments about the much-younger woman’s beauty.

The Daily News published portions of the texts online Tuesday morning. Within two hours Gov. Mike Dunleavy announced that Clarkson, who had planned to return to work Sept. 1, had resigned.

Clarkson has not responded to repeated interview requests but sent Dunleavy a resignation letter acknowledging errors in judgment. Clarkson characterized his texts to the woman, who does not work within the Department of Law, as “G-rated.”

Suggesting that his leave of absence followed a workplace investigation of some kind, he said that he “accepted the finding by Human Resources that my actions, however unintentionally, created an uncomfortable workplace environment for this employee.”

Dunleavy said in an email Tuesday that he had accepted Clarkson’s resignation.

“This administration has and always will expect the highest level of professional conduct in the workplace,” a statement from Dunleavy said. “There is nothing more important than the protection of our state employees, and that includes feeling safe when an employee is at work.

“Kevin Clarkson has admitted to conduct in the workplace that did not live up to our high expectations, and this is deeply disappointing. This morning he took responsibility for the unintentional consequences of his actions and tendered his resignation to me.”

The text records show Clarkson messaged the woman at all hours of the day and evening, sometimes from his state office, until she sent him a text in early April asking him to respect professional boundaries and saying she doesn’t accept late-night calls on her personal phone.

On March 16, Clarkson wrote to the state employee: “You’re beautiful ... sweet dreams. 😘 Sorry to bother you.” The day after that he texted, “So what are you doing sweet lady?” And the day after that: “Always nice to see you beautiful lady ... You have to find a way to say yes and come over and let me cook for you.”

Sharmili Majmudar, executive vice president of policy and organizational impact for the Chicago-based nonprofit Women Employed, said people in positions of authority should know better than to engage in the behavior on display in Clarkson’s texts.

“I would argue that he definitely crossed professional and ethical boundaries,” Majmudar wrote after reviewing dozens of the messages.

“(The woman) appears to be trying to navigate a tightrope between being friendly and responsive but not engaging in more intimate overtures with someone in a significantly more powerful position than herself,” Majmudar said.

The young woman receiving Clarkson’s texts is a state employee whose job requires her to occasionally interact with the attorney general. She works in a nonunion position and can be terminated at any time by the governor. Clarkson makes about 2.5 times more money than the younger employee. (The woman did not provide the texts reviewed for this story and declined to be interviewed.)

The newsrooms learned of Clarkson’s behavior in June and first requested copies of the messages from the Department of Law — which Clarkson oversees — on June 4. In a June 19 response the Law Department said the state “has no records.” The governor’s office has declined to answer questions about when the governor learned of the behavior and what actions were taken between the discovery of the messages and Clarkson’s leave of absence, which began Aug. 1.

Earlier this month Dunleavy spokesman Jeff Turner said Clarkson was expected to return to work Sept. 1 and declined to say if the attorney general was on paid or unpaid leave, citing personnel rules. On Friday the Department of Law, responding to another records request, clarified that Clarkson was on leave without pay.

Federal law, state law and state employment policies make it illegal for Alaska state employees to sexually harass colleagues. Such harassment includes any behavior that interferes with an employee’s work or creates “an intimidating or hostile work environment.”

Human resources experts and professors said that whether or not an employee’s behavior constitutes sexual harassment can be subjective, but there are several factors that an employer should consider. Among them: How frequent was the misconduct? And what is the power disparity between the two employees?

“Would you like your daughter or granddaughter to feel like they need to date someone because they are afraid of getting fired if they don’t?” said Beth De Lima, a human resources consultant who specializes in harassment cases.

De Lima said she couldn’t speak to the specifics of the attorney general case. But, she said, “if a situation like this occurs, it’s about perceived power.” Specifically: The perceived power of a management-level employee to impact another employee’s livelihood.

Caren Goldberg, a former human resources management professor and expert witness in harassment cases, also said she could not provide a legal opinion on the attorney general’s specific behavior in this case. She said that anytime an employee reports misconduct, the employer owes both parties an immediate and thorough investigation.

Clarkson told the woman he liked to hug her: “Haven’t seen you in awhile, so you owe me a number of hugs,” he texted on March 26. On many evenings, the attorney general asked the woman to come to his house to have dinner or to “sip on a glass of wine.”

When the woman responded, she gave warm and friendly replies but appeared to politely deflect, delay or decline each invitation. In some cases, she reminded the attorney general of the global pandemic, saying she needed to work at a second job to make ends meet or that she was caring for family members. The texts indicate she never did go to his home.

While the attorney general is not the woman’s direct supervisor, a “significant power imbalance” exists between two state employees, Majmudar said.

She said any employee in such a position may be “concerned about retaliation, which is a significant and widespread problem, often compounding the damage of the harassment itself. It’s the most frequently alleged basis of discrimination in claims to the (Equal Employment Opportunity Commission).”

Clarkson sent the woman a series of texts on the evening of March 17 and seemed to acknowledge her lack of interest.

Clarkson: “So what are you doing sweet lady?”

The woman: “Getting ready for work. I hope you enjoy the rest of your evening 😊.”

The attorney general then sent her an additional half-dozen texts — asking where she was working for her night job, adding kiss emoji, asking how she was doing — that appeared to go unanswered.

Early the next morning he wrote, “OK I won’t bother you more.” He’d enjoyed talking to her, he said, and “those hugs are always pretty darn special.”

After that apology, the attorney general sent the woman more than 200 additional texts.

On April 4, the woman told Clarkson to respect professional boundaries and that it would not be appropriate nor would she feel comfortable coming to his home. “Please remember this is my personal phone,” she wrote.

Prior accusations against Clarkson

In most states, the attorney general is elected. Alaska is one of eight states where the governor appoints an attorney to become the public’s top lawyer. Dunleavy chose Clarkson as attorney general in December 2018. The Legislature approved the pick five months later.

Public records show that this is not the first time his interactions with a woman have raised questions about harassing behavior. In two requests for domestic violence protective orders filed in state court in 1996, Clarkson’s ex-wife accused him of harassing and threatening her.

In a request for a protective order filed Aug. 23, 1996, his former wife wrote that Clarkson “threatened me not to tell anyone ‘what happened 10 years ago.’ (He’d paid for sexual favors from a pros),” short for prostitute.

An attorney for Clarkson’s ex-wife, Wayne Anthony Ross, wrote a letter the same week to Clarkson’s attorney, saying that Ross had called the ex-wife and Clarkson interrupted the call, hanging up the phone.

“Either get control of your client or I will have the court do so (and I don’t care if he is an attorney.) I will not have my client subjected to further harassment!” Ross wrote at the time. (Ross was once nominated to become Alaska attorney general, by then-Gov. Sarah Palin, but his nomination was rejected by the Legislature.)

On July 21, 1996, a magistrate granted one of the protective orders against Clarkson. It is unclear from court documents how the second, filed a month later, was resolved. In a response filed in state court during the same time period, Clarkson wrote that he sought to have the domestic violence filings dismissed and that he never committed violence of any kind toward his wife.

The Daily News and ProPublica asked Clarkson specifically about the prostitution allegation but he did not respond. The former wife did not respond to attempts to interview her for this story. Her requests for protective orders did not become a public issue during Clarkson’s 2019 confirmation hearings.

Late last year, Dunleavy wrote President Donald Trump asking for a favor on Clarkson’s behalf. In a Dec. 2 letter, the governor asked Trump to help Clarkson’s wife and stepson overcome immigration obstacles in order to leave Colombia and join him in Alaska.

“Over the past year, I have found Attorney General Clarkson to be a wise and trusted legal advisor, a man of exceptional character, and a devoted husband and father,” the governor told Trump. Before being appointed in late 2018, Clarkson had been a champion of Christian conservative views on social issues such as same-sex marriage and abortion.

It is unclear if the Trump administration has responded in any way to Clarkson and the governor’s request for immigration help.

Before Clarkson’s resignation, his weeks-long absence from work hinted at a serious disciplinary matter.

It is unusual for an attorney general to be unreachable by email for an entire month or for the attorney general to delegate his or her responsibility for that period of time. In fact, none of the previous three attorneys general took a monthlong leave that required the delegation of their authority to another state employee, according to the Department of Law.

Clarkson is the 26th attorney general for the state of Alaska. His predecessor, Jahna Lindemuth, said that when she traveled as attorney general she might briefly delegate decision-making to another state official in the case of emergencies while she was flying or unreachable by email or phone.

“Being attorney general is like being the governor. It’s a 24/7 job,” she said. “The length of the leave was surprising to me.”

In one of his texts to the state employee in March, Clarkson explained his job in similar terms. “I was talking to the governor. I’m on duty 24/7,” he wrote to the woman on March 26.

Clarkson then noted how the nights were getting longer. He added, “Are you still up?” The woman gave no reply.