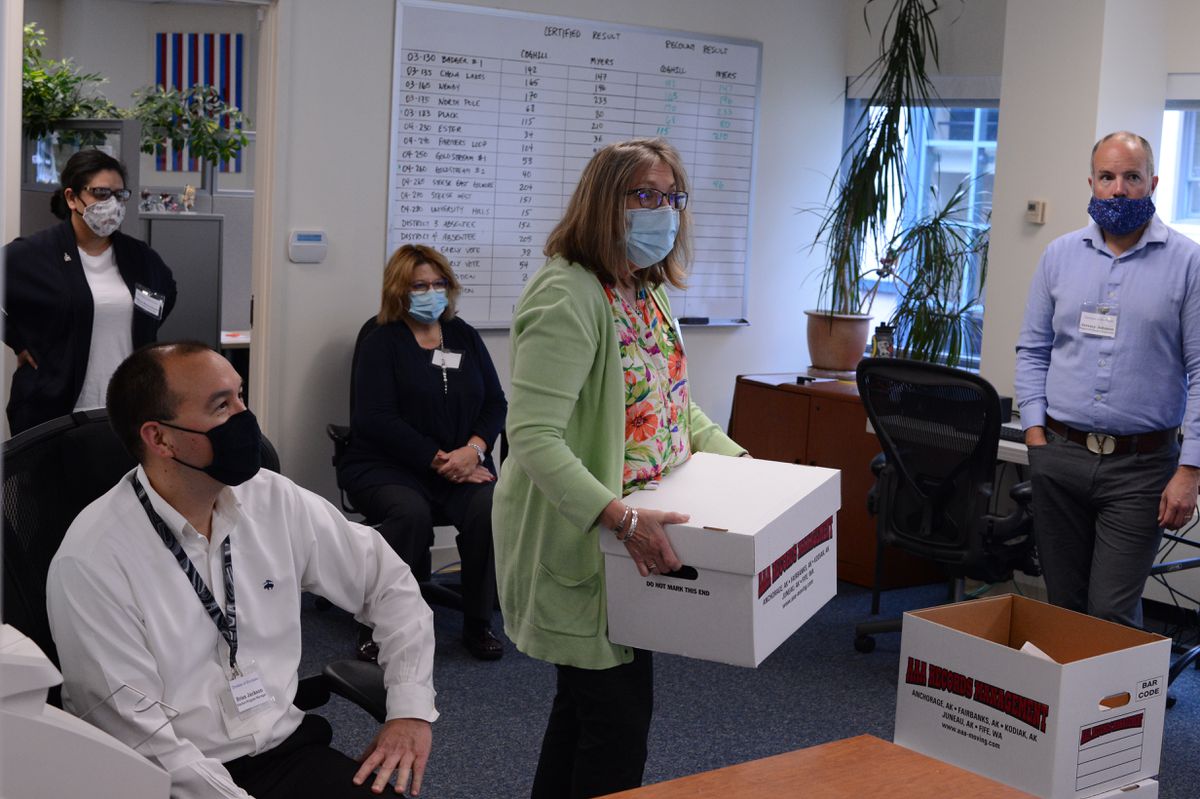 Gail Fenumiai, director of the Alaska Division of Elections, moves a box of ballots during the Wednesday, Sept. 2, 2020 recount for the Alaska Senate primary between John Coghill and Robert Myers. (James Brooks /ADN)

Gail Fenumiai, director of the Alaska Division of Elections, moves a box of ballots during the Wednesday, Sept. 2, 2020 recount for the Alaska Senate primary between John Coghill and Robert Myers. (James Brooks /ADN)

A lawsuit over the new design of Alaska’s election ballots is only the latest legal challenge to how elections are conducted in the state.

Including recounts, more lawsuits have been filed against elections officials during the first two years of Gov. Mike Dunleavy’s term than were filed in all four years of the administration run by Gov. Bill Walker, online court records indicate.

After the Alaska Supreme Court’s decision on Friday, two lawsuits remain in the courts and could affect the running of this year’s elections:

• The Alaska League of Women Voters, Arctic Village Council and two women are suing to suspend a state law that requires two signatures on every absentee ballot. They say that during a pandemic, it doesn’t make sense to require voters to find a second person to sign the ballot. A state judge will hear arguments in that case on Sept. 28.

Other cases have been resolved:

• The backers of Ballot Measure 1, which would increase taxes on select North Slope oil fields, challenged a description of their measure written by the office of Lt. Gov. Kevin Meyer. A Superior Court judge said Meyer put “his finger on the scales” of the election with the description, and the Alaska Supreme Court agreed, ordering the state to rewrite the description.

• Opponents of Ballot Measure 1 sued the measure’s backers and the Division of Elections, alleging violations of a law that restricts how ballot measure signatures can be gathered. The Alaska Supreme Court upheld a lower-court ruling that found the law unconstitutional.

• The Division of Elections initially rejected Ballot Measure 2, but that decision was overridden by the courts, which said it follows both state law and the Alaska Constitution.

• The division also rejected the recall petition against Gov. Dunleavy, a decision reversed by the courts. That issue is not on the ballot this year because supporters have failed to gain enough signatures to force a vote.

• The Alaska Libertarian Party sued the Division of Elections in an attempt to put their presidential candidate on the ballot without gathering needed signatures. After a federal judge signaled that he would rule against the party, it dropped the lawsuit and gathered the signatures it needed.