Primary election losses confirmed for 6 Republican Alaska lawmakers, but another race is too close to call 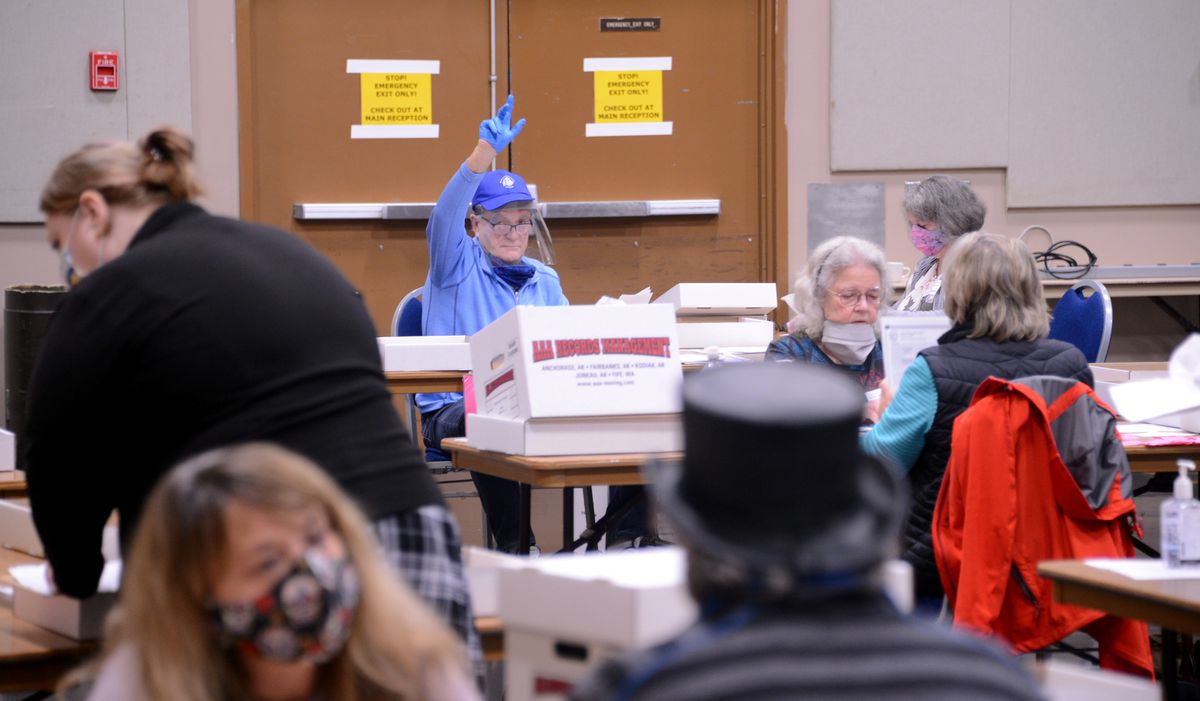 Jim Carroll raises his hand for attention during the randomized hand-count double-check following Alaska's Aug. 18, 2020 statewide primary election. Carroll was among the teams of workers who gathered in Juneau, Alaska's Centennial Hall to hand-count ballots from across the state. (James Brooks / ADN)

Jim Carroll raises his hand for attention during the randomized hand-count double-check following Alaska's Aug. 18, 2020 statewide primary election. Carroll was among the teams of workers who gathered in Juneau, Alaska's Centennial Hall to hand-count ballots from across the state. (James Brooks / ADN)

Six Republican incumbent state lawmakers have lost their bids for re-election, two used absentee ballots to reverse election-day gaps, and one incumbent’s race remains too close to call as the Alaska Division of Elections prepares for the final day of vote-counting after the state’s Aug. 18 primary election.

Republican Sens. Natasha von Imhof of Anchorage and Gary Stevens of Kodiak won their Republican primary races Thursday as poll workers tallied absentee ballots. Both trailed on election day but saw their fortunes rise as additional votes were counted. Few ballots remain uncounted in their races, and the absentee trend has been in their favor.

The trend has also been in favor of incumbent Republican Sen. John Coghill, but he still trails challenger Robert Myers by eight votes, and few votes remain. Coghill’s contest is one of a handful that remain a tossup.

Six Republican incumbents are confirmed to have lost, based on results through Thursday:

• James Kaufman has defeated Rep. Jennifer Johnston in the Republican race to represent the Anchorage Hillside. Four other candidates have signed up for the general election.

Three other Republican incumbents will not serve another term in the Legislature, including two who decided to not run for re-election and Kenai Rep. Gary Knopp, who died in a plane crash before the election.

Others races that should be decided Friday:

• In downtown Fairbanks, Christopher Quist leads Bennie Colbert by 11 votes in the Democratic primary for House District 1. That race matters because the winner will face Republican incumbent Rep. Bart LeBon, who won by only one vote in last year’s general election. This year, the two Democrats have received more votes combined than LeBon, who ran unchallenged in the Republican primary.

• In House District 23, (Anchorage south of Tudor Road, west of the Seward Highway, east of Minnesota Drive and north of 104th Avenue) Kathy Henslee leads Connie Dougherty by seven votes in the Republican primary. The winner faces incumbent Democratic Rep. Chris Tuck in the general election, and the past few November elections have been close. Alaskan Independence Party candidate Timothy Huit will also be in the general election.

• In Sitka and portions of southern Southeast, Kenny Skaflestad leads Arthur Martin by 13 votes in the Republican primary for House District 35. The winner faces Democratic Rep. Jonathan Kreiss-Tomkins in the general election.

• In Nome, incumbent Democratic Rep. Neal Foster was only 41 votes ahead of Tyler Ivanoff in the Democratic primary for House District 39.