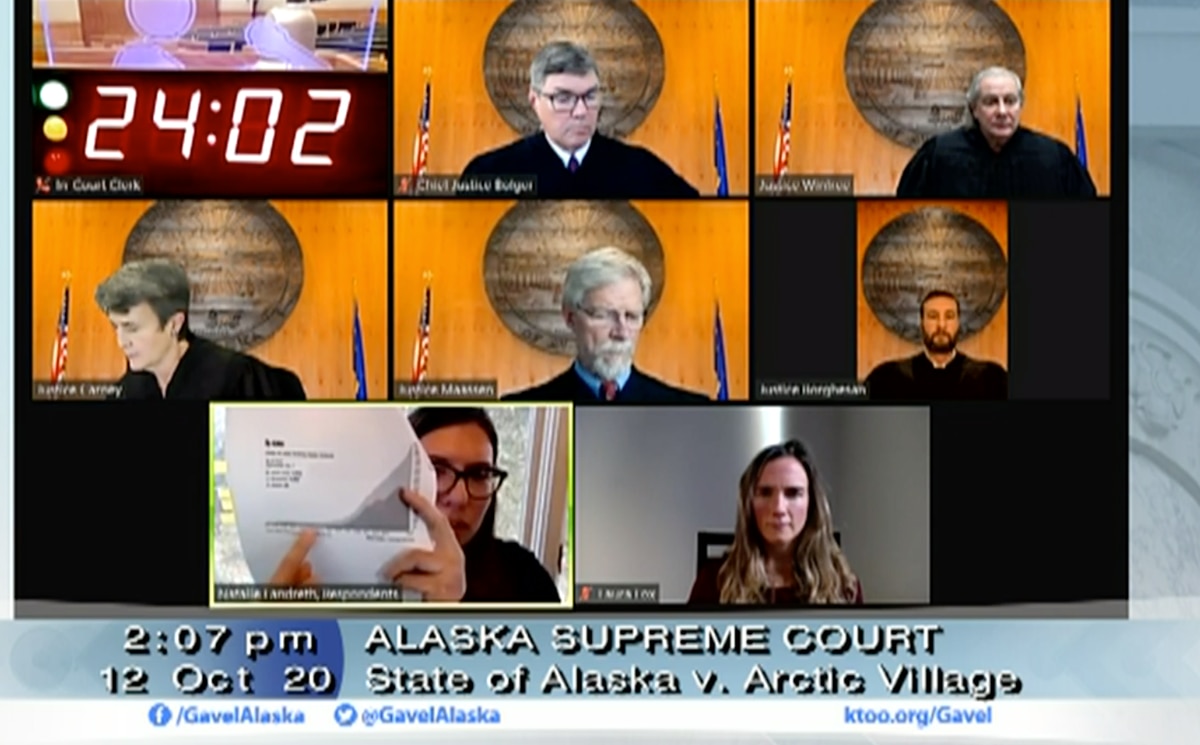 Natalie Landreth, an attorney for the Native American Rights Fund, points to Alaska's COVID-19 case counts on Monday, Oct. 12, 2020 in a hearing of the Alaska Supreme Court. (Screenshot)

Natalie Landreth, an attorney for the Native American Rights Fund, points to Alaska's COVID-19 case counts on Monday, Oct. 12, 2020 in a hearing of the Alaska Supreme Court. (Screenshot)

Alaskans do not need to have a second person sign their absentee ballots, the Alaska Supreme Court said on Monday, confirming a lower-court decision.

A record number of Alaskans are voting absentee this year, and “improper or insufficient witnessing” has consistently been the top reason for rejected absentee ballots during the past few primary elections, according to Division of Elections statistics.

State law ordinarily requires absentee voters to sign their ballots and get the signature of a witness who is at least 18 years old, but a group of Alaskans sued last month to pause the witness requirement during the COVID-19 pandemic.

The witness requirement will not be enforced this year, though ballots' written instructions will still say that a second signature is required.

More than 111,000 Alaska voters have requested absentee ballots, tens of thousands have already been mailed to voters and 10,915 have already been voted and returned, according to statistics published by the Division of Elections.

The division is planning to release an instructional video about how to properly fill out an absentee ballot, it said after the ruling.

“In order for a person’s vote to count, voters must still sign the back of the absentee ballot envelope and provide the voter identifier, such as date of birth, driver’s license number, etc.,” the Division of Elections said in a written statement.

The division also said nothing prohibits a voter from having their ballot witnessed — a ballot will be counted with or without a witness signature as long as it meets all other requirements.

During the state’s August primary election, 62,455 Alaskans requested absentee ballots, and 456 were rejected for “improper or insufficient witnessing,” according to a Division of Elections report. That was the most common reason that a ballot was not counted and accounted for more than a third of all rejections.

Last month, the tribal government of Arctic Village, the League of Women Voters of Alaska and two older women who are vulnerable to COVID-19 sued the state, saying the second-signature requirement doesn’t make sense during the pandemic.

The court held oral arguments for more than an hour on Monday afternoon.

Natalie Landreth of the Native American Rights Fund said Arctic Village is under a strict COVID-19 quarantine, and getting a witness signature means “you have to break quarantine, essentially break the law in Arctic Village,” in order to vote.

The plaintiffs were represented collectively by attorneys from the Native American Rights Fund, the Alaska chapter of the American Civil Liberties Union and the Lawyers' Committee for Civil Rights Under Law.

State attorney Laura Fox, representing the Division of Elections, responded that Arctic Village residents and other plaintiffs have to buy groceries and still interact with other people. They could simply get a second signature when they do their necessary errands, she said.

“The division doesn’t think changing election rules in the middle of an election is a good thing,” she said, arguing to the justices that voters could be confused if the instructions on their ballot say one thing but the court says another.

After hearing arguments, the justices concluded in their written statement that Crosby did not abuse her discretion by pausing the signature requirement.