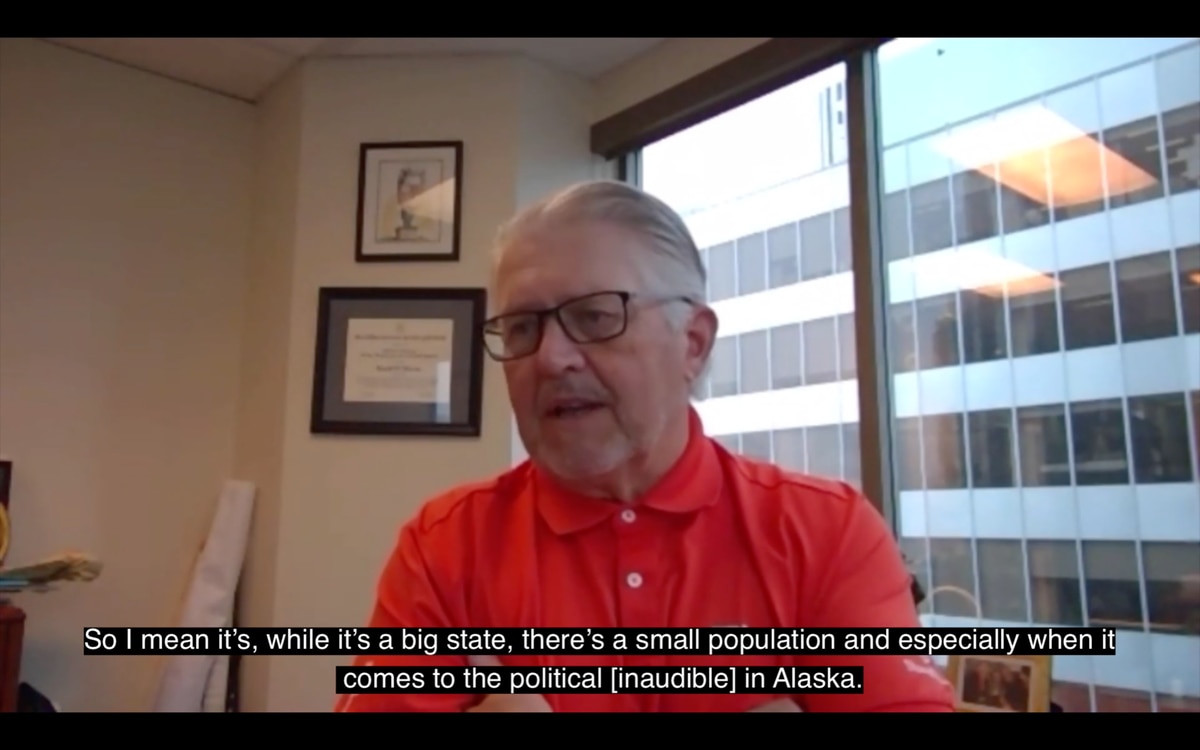 An environmental group on Thursday released two additional video recordings of Pebble mine executive Ron Thiessen discussing his political strategy for winning a federal permit for the mine.

The release is a follow-up to the damaging tapes the group released in September that became a flashpoint in Alaska’s U.S. Senate race and led to the downfall of Thiessen’s former colleague from the project, Tom Collier.

The Environmental Investigation Agency said in a written statement that the newly released video recordings, part of the same meetings originally recorded in August and September, highlight Thiessen’s role as head of the project.

The videos also underscore the financial benefit that companies he is involved in will receive if the mine is built, the group said.

The EIA late last month released a first round of undercover, online video meetings with Collier, Thiessen and people they hired to pose as potential investors in the mine. Pebble has said the fake investors posed as representatives of a Hong Kong-based investment firm with links to a state-owned entity in China.

Both Thiessen and Collier in the original tapes provided descriptions of political influence that Alaska’s U.S. senators, governor and the U.S. Army Corps of Engineers quickly denounced as false.

In the newly released tapes, totaling about 18 minutes, Thiessen repeats statements he made in the previous tapes that Gov. Mike Dunleavy supports the Pebble project, and that Republican Sens. Dan Sullivan and Lisa Murkowski are keeping quiet about Pebble until the Nov. 3 election is over, after the senators first released statements against the project in August.

• “The governor of the state of Alaska is very much onside with resource development, Pebble in particular.”

• Pebble has “quite a few contacts" with Murkowski and Sullivan. And it’s "better that they’re just quiet, and we’re OK with that.”

• The U.S. presidential election is the “silly season," after which "everybody forgets what everybody promised to do. You aren’t held to your promises.”

• Pebble believes the state and other Alaska entities will cover most of the project’s infrastructure costs, about $1.5 billion.

“We have already commented on these tapes and we don’t intend to comment further,” said Mike Heatwole, a spokesman with Pebble. “Our current focus is on completing the federal permitting process for the project.”

In earlier statements after the initial tapes were released, the Pebble Limited Partnership has said the views expressed in them were “boastful, embellished, insensitive and stretched credulity to its breaking point." The company maintains the mine can be developed fairly and safely.

Gov. Dunleavy’s office said in a written statement on Thursday that Thiessen’s comments are his own and he does not speak on behalf of the governor or the state.

“There are no plans for the state to contribute to the development costs of any mine project, including Pebble,” the statement said.

The governor’s office said that if Pebble submits mining plans for state approval, a step that would follow federal approval, the project will receive an impartial review just like any project proposed on state land.

Murkowski’s office said late Thursday they have not reviewed the tapes, but they don’t expect to hear anything that would change the senator’s opposition to the mine.

The so-called “Pebble Tapes” became a key issue in the senate race between Sullivan and Al Gross, the independent Democratic-nominated challenger. Both Sullivan and Murkowski have restated their opposition to the Pebble project since the tapes appeared, with Sullivan doing so forcefully.

The Gross campaign has frequently highlighted the tapes during the campaign, saying Sullivan is being dishonest when he says he’s against the mine. Gross on Thursday put out a statement saying the new recordings show “Sullivan plans to break his promise, opposing the mine as soon as the election is over.”

Matt Shuckerow, Sullivan’s campaign manager, said the statements made in the new tapes, as with the originally released videos, are not true. Sullivan has repeatedly been clear in saying he opposes Pebble mine, Shuckerow said.

EIA said on Thursday that Thiessen organized the meetings, held on Zoom, that the group released.

Thiessen is the “man behind the curtain,” calling the shots for the project, said Danielle Grabiel, counsel for the environmental group, in a prepared statement on Thursday.

“We found it interesting that in our investigative conservations with Mr. Thiessen, he said many if not most of the same things (as) Tom Collier, if not in more detail, but only Mr. Collier resigned,” Grabiel said.

The controversial Pebble prospect would be built about 200 miles southwest of Anchorage, near headwaters of the Bristol Bay salmon fishery. The Corps is in the final stages of determining whether the project should receive a permit that could lead to construction in the coming years.

Grabiel said Thiessen arranged all the calls and correspondence between the environmental group’s undercover investigators, and led each conservation.

Pebble has been looking for a financial partner after major mining companies backed out over the years.

Collier said this summer, before he resigned, that Northern Dynasty had raised $35 million through the stock market, providing funds to carry the project into next year.

Grabiel, with the environmental group, said Thiessen was eager to discuss the project with the potential investors.

“I don’t know what level of due diligence (Northern Dynasty) did before having the conversations with our investigators,” Grabiel said.

Thiessen hopes construction of the project can enrich the companies he’s involved with, the environmental group asserted.

Groups opposed to Pebble asserted that the newly released tapes are more evidence that Pebble officials have not dealt honestly with the public.

“The two additional tapes released by the Environmental Investigation Agency make clear that deceit is a bedrock of the company’s tactics, and provide additional insight into the company’s financial house of cards — including the belief that Alaskans will subsidize the foreign mining company’s effort with $1.5 billion for infrastructure," the United Tribes of Bristol Bay said in a statement.

The group represents 15 tribes in the region where the mine would be built.