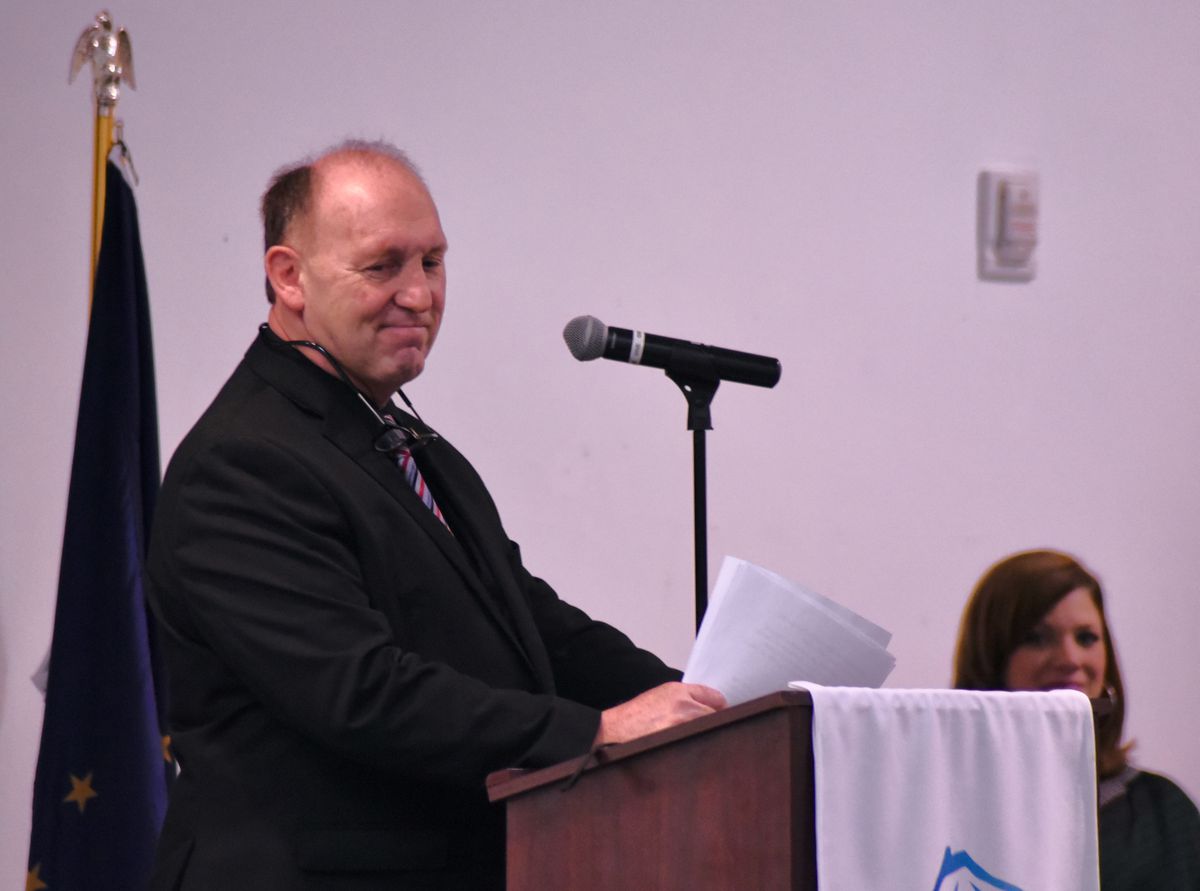 Rep. Gary Knopp, R-Kenai, speaks at breakfast event hosted by the Kenai and Soldotna chambers of commerce on Friday in Kenai. Knopp has been a central figure in the gridlock in the Alaska House of Representatives this session as he refused to join a prospective 21-member Republican majority caucus. (Photo by Elizabeth Earl)

Rep. Gary Knopp, R-Kenai, speaks at breakfast event hosted by the Kenai and Soldotna chambers of commerce on Friday in Kenai. Knopp has been a central figure in the gridlock in the Alaska House of Representatives this session as he refused to join a prospective 21-member Republican majority caucus. (Photo by Elizabeth Earl)

KENAI — Despite pressure from Republicans in his own district, Rep. Gary Knopp, R-Kenai, defended his actions in the Alaska House of Representatives and said he won’t resign or change his party affiliation.

During a breakfast hosted by the Kenai and Soldotna chambers of commerce Friday, he told attendees that he chose to break from a fragile Republican majority with the minimum 21 members because it was destined to fail.

“We had no chance of functioning or succeeding the way it was,” he said. “In a 21-member coalition, you had virtually no experience.”

Knopp has been at the center of controversy as he defied his party and refused to caucus with House Republicans.

District 30 Republicans had passed a resolution last Monday offering Knopp an ultimatum: Either join a Republican majority, or resign. After Knopp voted against electing Rep. Dave Talerico, R-Healy, as House speaker a day later, Republicans in District 30 launched a “Recall Gary Knopp” Facebook page aimed at pressuring him to join the Republican caucus or face the consequences.

On Thursday, as Dillingham Rep. Bryce Edgmon — who recently switched his affiliation from Democratic to undeclared — was elected House speaker, Knopp was traveling back to Kenai to visit with constituents through Sunday. Knopp was excused from that floor session.

Now, Edgmon will preside over a chamber with a coalition majority composed of 15 Democrats, two independents and eight Republicans, including Knopp.

Some attendees of Friday’s event offered support for Knopp’s decision while others told Knopp they were disappointed. One asked that he switch his affiliation to Democrat if he wouldn’t vote with a Republican majority.

“You can’t define ‘Republican,’” Knopp said. “I’ve never voted down party lines. I’ve always been an issue-by-issue candidate, and I’ll remain that way. I think the Republican Party has done more to divide us as Republicans in the last couple of years than any time in our state history. I think we’re on a path of correction now … I’ll remain Republican, I’ll always vote the issues, not on the party.”

Knopp explained that during the initial organization days, he saw sharp philosophical divides even among the Republicans. Many members of the House have served fewer than two terms — including Knopp, who was elected to the seat in 2016 — and that level of inexperience has led to disorganization and would have caused the caucus to later implode, Knopp said.

On Friday, Feb. 8, he said he approached the Republicans and said he’d be their 21st vote to “move the needle” after a month of gridlock in the House. But the next day, he said he discussed concerns about the caucus’s instability with Rep. Louise Stutes, R-Kodiak, who proposed putting his name forward as speaker of the House.

During the floor session Tuesday, Feb. 12, Stutes moved his name forward, where a confirmation for him as speaker failed 20-20. Republicans said they felt misled after Knopp had promised them that he would support a Republican speaker.

Knopp said he had engaged with conversations with Stutes’ coalition about possibly moving his name forward as speaker but that it was their idea.

“They were more interested in the coalition concept,” he said. “… I didn’t know who they were going to put forward, even up to the day that they did it. They were very concerned. So we took a shot, we put my name forward, I voted for myself. If one of them would have supported me, we would have had a Republican speaker, and we could have coalesced around that concept. That didn’t happen.”

Things are different in the state, he said. Members of the Legislature don’t have bargaining chips like capital projects funds to grease the wheels for votes between the caucuses anymore, “driving the need for this discussion,” he said.

Among the crowd of about 100 people were former Reps. Kurt Olson, whom Knopp replaced in 2016, and Mike Chenault, who served as speaker of the House for four terms and explored a run for governor in 2018 before pulling out just before the filing deadline. Both said they had never seen deadlock in the House organization like this year. Olson referenced Knopp’s comments about the inexperience of the members of the House.

“We were always organized within a day or two after the election,” Olson said.

Both said they weren’t surprised to see the magnitude of the cuts in Gov. Mike Dunleavy’s budget this year, but they expected the Legislature to restore some funding before the session is over. Dunleavy, however, does still wield the line-item veto if they restore too much, Chenault noted.

The Legislature has been debating whether to raise revenue or drastically cut the budget for the last four years, with few to no long-term solutions. Chenault said the legislators will have to have similar debates with this budget on the floor.

“I think a lot of Alaskans are figuring out what state the state is really in,” Chenault said. “Do you fill that hole or do you find that funding somewhere else?”

Knopp also offered some critiques of Dunleavy’s budget, which would impact the Kenai area. High on that list was the removal of some financial support for the Alaska Gasline Development Corp., which has been heading the development of the Alaska LNG Project.

The project’s plans include building a natural gas liquefaction plant on about 800 acres in Nikiski, a massive economic boon to an area that has lost oil and gas producers in the past decade.

Though he’s been optimistic in the past, Knopp said Dunleavy’s budget seems to spell an end for the project.

“I wanted to see it go through at least to the permitting stage and have those guys looking for markets for that gas,” he said. “For all practical purposes, it seems to be dead at this point. I hope to see it through to the final permitting stage, the EIS (environmental impact statement) … I believe the governor’s intent would be to engage industry back into that project.”

Dunleavy’s budget slices more than $1.6 billion from the state’s budget. Cutting that much from the budget in one fell swoop seems harsh, Knopp said, and while he said he wants to see responsible spending, Dunleavy’s approach seems too broad.

“I’ve never seen an administrator wield a big ax and take this approach to right-sizing government,” he said. “There’s a methodical, analytical approach to what we do, and that’s having the conversations.”