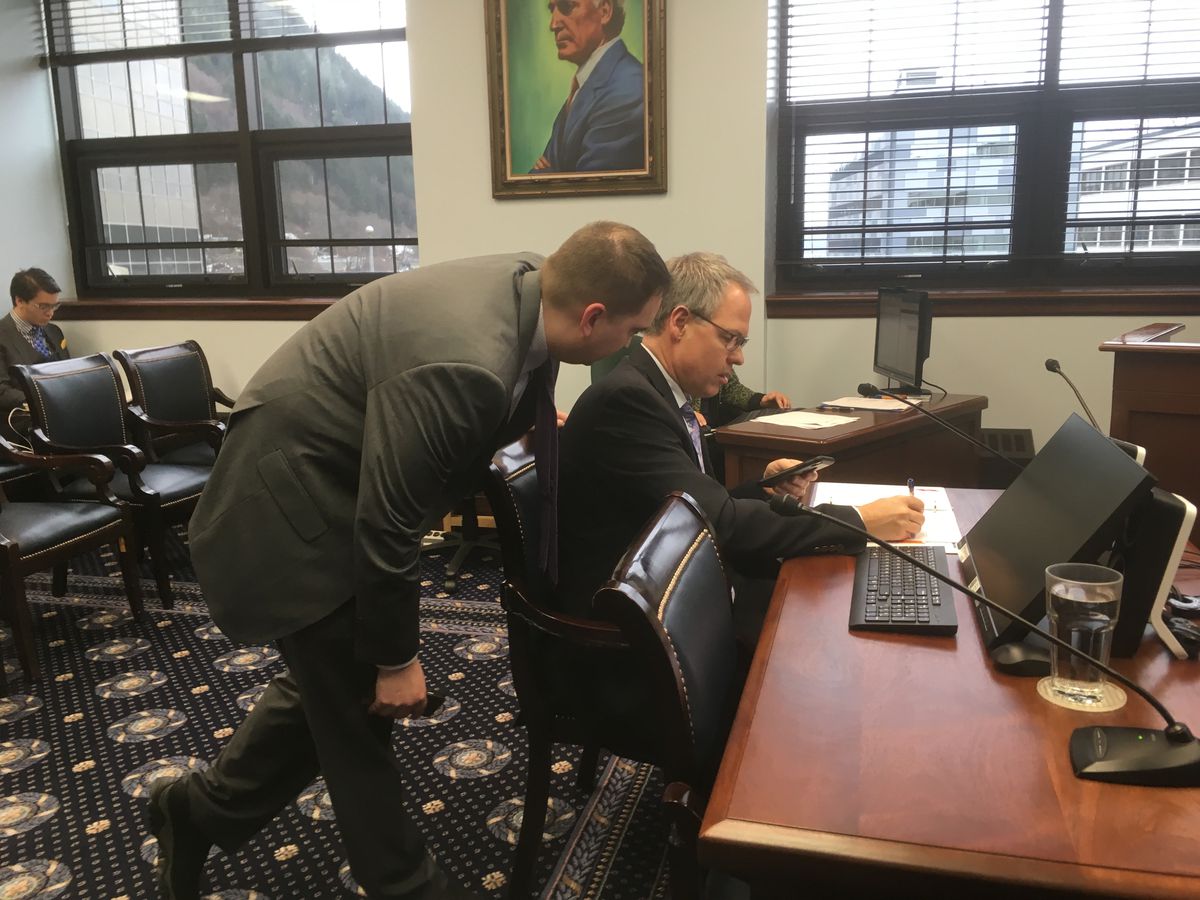 JUNEAU — It’s one step forward and one step back for Gov. Mike Dunleavy’s Permanent Fund dividend payback proposal, which has encountered a constitutional conundrum: The Legislature’s nonpartisan attorneys say the governor’s plan may be illegal. Attorneys from the Alaska Department of Law disagree.

“We do have dueling memos,” Revenue Commissioner Bruce Tangeman told members of the Senate State Affairs Committee on Tuesday night.

That night, the committee voted to advance the governor’s proposal despite the disagreement. On Wednesday morning, citing the legal dispute, Senate President Cathy Giessel, R-Anchorage, sent the legislation to the Senate Judiciary Committee, adding another legislative hurdle.

The two bills involved in the proposal had been scheduled to go to the Senate Finance Committee, then a vote of the full Senate. Full passage is unlikely, legislators have said.

According to the legal analysis offered by legislative attorney Emily Nauman, “a court would likely find (Senate Bill 24) to be an unconstitutional durational residency requirement by discriminating against some state residents and by infringing on an individual’s fundamental right to travel.”

“We think that the legislation could withstand a legal challenge. I certainly acknowledge you have another opinion that tilts another way,” Milks told members of the state affairs committee.

To understand the problem, you have to go back to the 1980s. The Alaska Legislature had created the Permanent Fund dividend as a “longevity bonus." Alaskans who lived for more years in the state would receive more money. Newcomers would get less.

In 1980 two Anchorage lawyers, Ron and Penny Zobel, challenged the constitutionality of that approach and of a separate income tax levied only on people who had lived in the state for three years or less. They argued that both laws violated the equal protection clause of the federal and state constitutions.

Both laws were popular among Alaskans, and for their resistance, the Zobels received death threats, were harassed and were the target of bumper-sticker and T-shirt slogans such as: “Zobels Eat My Shorts.”

In 1982, as a backstop plan, the Legislature approved a plan to pay the dividend equally to Alaskans and developed a formula to calculate the annual amount of the dividend. That formula has been used with minor revisions since then.

While the Alaska Supreme Court has ruled that the Legislature and governor may pay less than that formula-driven amount, Dunleavy disagrees with the court’s interpretation and has repeatedly said the state should pay the full amount.

As proposed by Dunleavy, Senate Bill 23 and Senate Bill 24 would retroactively pay Alaskans portions of the Permanent Fund dividends that were vetoed by Gov. Bill Walker in 2016 and cut by the Alaska Legislature in 2017 and 2018.

That framework is the problem, Nauman wrote, just as it was in the Zobel cases.

“The multi-year residency requirement for additional dividends in SB 24 would likely be ... subject to strict scrutiny based on an infringement on the right to travel and the discrimination among state residents, favoring long-term residents,” Nauman’s memo states.

She acknowledges “uncertainty” in her conclusion and says that it could be argued that the additional payment is akin to back pay owed to residents.

“However,” she writes, “this argument is unlikely to be accepted by a court.”

This isn’t the first time the Legislature has been confronted with dueling legal opinions, though it remains relatively rare. In the most recent example, Nauman disagreed with the Department of Law’s interpretation of a measure that would allow the state to borrow up to $1 billion to pay tax credits to oil and gas drillers.

The Legislature passed the measure anyway, and it was immediately challenged in court. The state won a district court decision, but the matter has been appealed to the Alaska Supreme Court and remains in litigation.