The Alaska Senate is about to roll out its proposed budget, with spending cuts deeper than the House’s 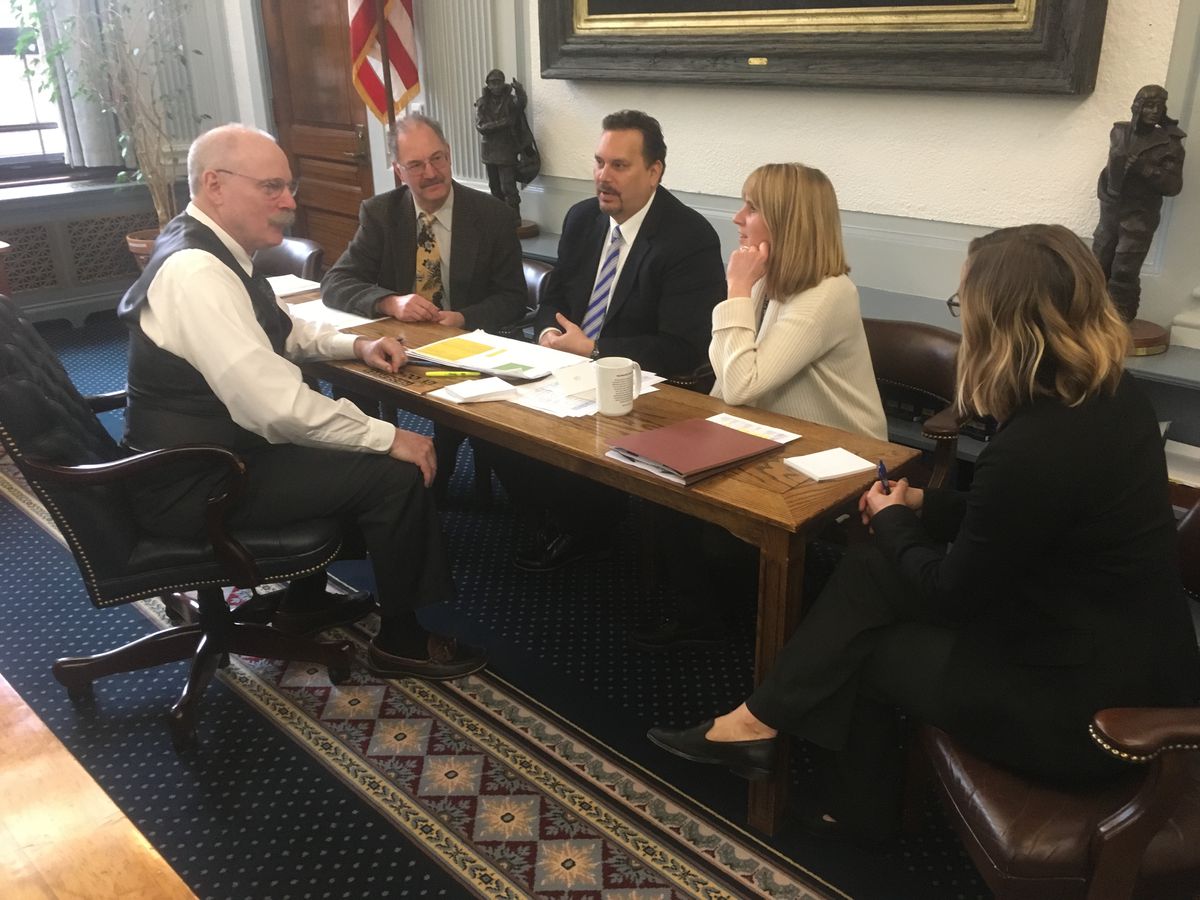 The leaders of the Senate Finance Committee speak with legislative staff Thursday morning, April 18, 2019. At left is Sen. Bert Stedman, R-Sitka and co-chair of the committee. Seated second from right is Sen. Natasha von Imhof, R-Anchorage and the other co-chair. (James Brooks / ADN)

The leaders of the Senate Finance Committee speak with legislative staff Thursday morning, April 18, 2019. At left is Sen. Bert Stedman, R-Sitka and co-chair of the committee. Seated second from right is Sen. Natasha von Imhof, R-Anchorage and the other co-chair. (James Brooks / ADN)

JUNEAU — Members of the Alaska Senate’s finance committee are scheduled Monday to unveil a state budget proposal that rejects extensive cuts proposed by Gov. Mike Dunleavy but sticks closer to the governor than a separate alternative approved by the Alaska House of Representatives earlier this month.

“Everything’s on track for the operating budget: On track, on calendar, so far, so good,” said Sen. Bert Stedman, R-Sitka and co-chairman of the Senate Finance Committee, in a conversation with reporters Thursday morning. “We’ve been working on the writing of that bill for several days, and we’ve got some more loose ends to tie up.”

“I would expect the Senate operating budget to come in — on our agencies — lower than the House,” he added.

Three plans on the table

If it were graphed, the state’s budget process would look like two turkey wishbones laid end to end, starting and ending at a single point. The governor introduces his proposal as a single starting point, then the House and Senate take separate tracks. Each has subcommittees to set budgets for individual state departments. Each uses its finance committee to combine those department budgets into a proposal, then amend that proposal. Each chamber votes on that proposal on the floor. The House and Senate have reached a budget compromise and come back to a single point.

The House has completed its proposal and is waiting on the Senate to do the same. (The House Finance Committee has turned its attention to crime-fighting legislation in the meantime.) According to a schedule provided by Sen. Natasha von Imhof, R-Anchorage and a co-chair of the Senate Finance Committee, that committee will examine the Senate’s alternative budget next week and consider amendments to the alternative.

A schedule released this week calls for the finance committee to begin meeting Monday afternoon on the alternative budget, with an analysis from the nonpartisan legislative finance division on Tuesday. After a Wednesday break to allow for amendments to be drafted, the committee will return to the budget for the last two days of the week.

As soon as the first few days of May, the proposal will be on the Senate floor and approved by senators. That would leave two weeks for a compromise before the end of the regular session. The governor’s veto power would come into play after that, if he chooses.

Though the Senate plan is shaping up to be closer to the governor’s than the House’s, the Senate is siding with the House on budget issues that would require additional legislation. For example, Dunleavy proposed taking more than $420 million in petroleum and fisheries taxes from local communities for the state treasury. That would require legislative permission, and von Imhof said last week that it will not happen.

The governor has proposed eliminating the state’s senior benefits program. A Senate subcommittee rejected that elimination, following the lead of the House.

The House and Senate have agreed to keep legislation from last year that funds the state’s K-12 public schools next year without any cuts. The governor has challenged the Legislature’s ability to keep that appropriation.

Within the House budget is a plan to pay $70 million in oil and gas tax credits from the accounts of the Alaska Industrial Development and Export Authority. Stedman said his preference is that the Senate pay that amount — plus more — from the state treasury instead.

“I don’t like that strategy using AIDEA receipts … I’m not saying we won’t do it,” he said.

Paying oil companies from the treasury would inflate the Senate budget figures above the House, he said, even if the Senate cuts more money from agencies.

“That is one of the big components we’re still talking about,” he said.

He said he would also prefer some “backfill” into the corpus of the Alaska Permanent Fund, but details of that idea were not immediately clear.

All three proposals — House, Senate and the governor’s — reject the idea of raising taxes to erase the state deficit or preserve a larger Permanent Fund dividend. Instead, each has adopted a binary stance: Cutting state services raises the dividend, and reducing the dividend allows more services.

On Thursday, Stedman didn’t rule out the possibility of the Senate budget spending from savings.

“If you don’t have recurring revenue, you have to go into your savings accounts to make your payroll. You don’t have any choice,” he said. “So we’re going to have that discussion.”

Dividends on the table

Dunleavy’s budget proposal is built around the idea of a “full” dividend paid using the statutory formula in state law. That would be about $3,000, plus or minus $300, according to the calculations of Ed King, chief economist with the Office of Management and Budget. The House budget proposal doesn’t include a dividend amount. Speaking on the House floor last week, lawmakers said their intention is to address the dividend in separate legislation, but Rep. Neal Foster, D-Nome, estimated the House dividend at $1,284 during an April 12 press conference if lawmakers used only the money left over after state services are paid for.

Von Imhof told reporters last week that the Senate intends to include the dividend as a set line item in the budget, and Stedman said Thursday that the budget will “most likely” include a dividend amount. That amount may be close to the House figure or slightly above.

He said that with the governor’s figure and the Senate’s expected level of budget cuts, “clearly there’d be a deficit on recurring revenue with a $3,000 dividend.”

One of the biggest differences among the three budgets is in the way they treat health care spending. The House approved a $3.2 billion budget for the Department of Health and Social Services. The governor proposed $2.49 billion, though the department has since conceded that not all of those savings are possible this year. The Senate’s figure is $3.14 billion, according to legislative finance division numbers.

“We cut over $135 million in (undesignated general fund) dollars. The budget that we are proposing is below $1 billion UGF for the first time since 2011,” von Imhof said, referring to the amount of direct state support for the department, which is funded primarily with federal money.

Medicaid spending in the Senate budget is $25 million below the House’s figure.

The House and Senate budget plans each reject the governor’s proposal to reduce state support for the university system by $134 million, or 40 percent. The House has settled on a $10 million cut, but the proposal from the Senate’s university budget subcommittee is even less than that: $5 million. Thanks to a budgeting change created by the Senate subcommittee, that reduction would come from the university’s Fairbanks and Anchorage campuses only.

Stedman, who represents a coastal community, oversaw the budget discussions for the Department of Transportation, but the Alaska Marine Highway System didn’t escape cuts under his management. The draft Senate proposal cuts ferry funding by $44 million, according to figures from the transportation subcommittee. The governor’s proposal involved $98 million in cuts and no service after Oct. 1. The House’s proposal is for $10.9 million in cuts, according to figures from the nonpartisan finance division.

Stedman said he doesn’t look at the Senate figure as a cut, since the governor proposed no service.

“That is economically dangerous and unworkable for coastal Alaska,” he said of the governor’s plan.

“Clearly, reduced service is better than no service at all,” Stedman said.