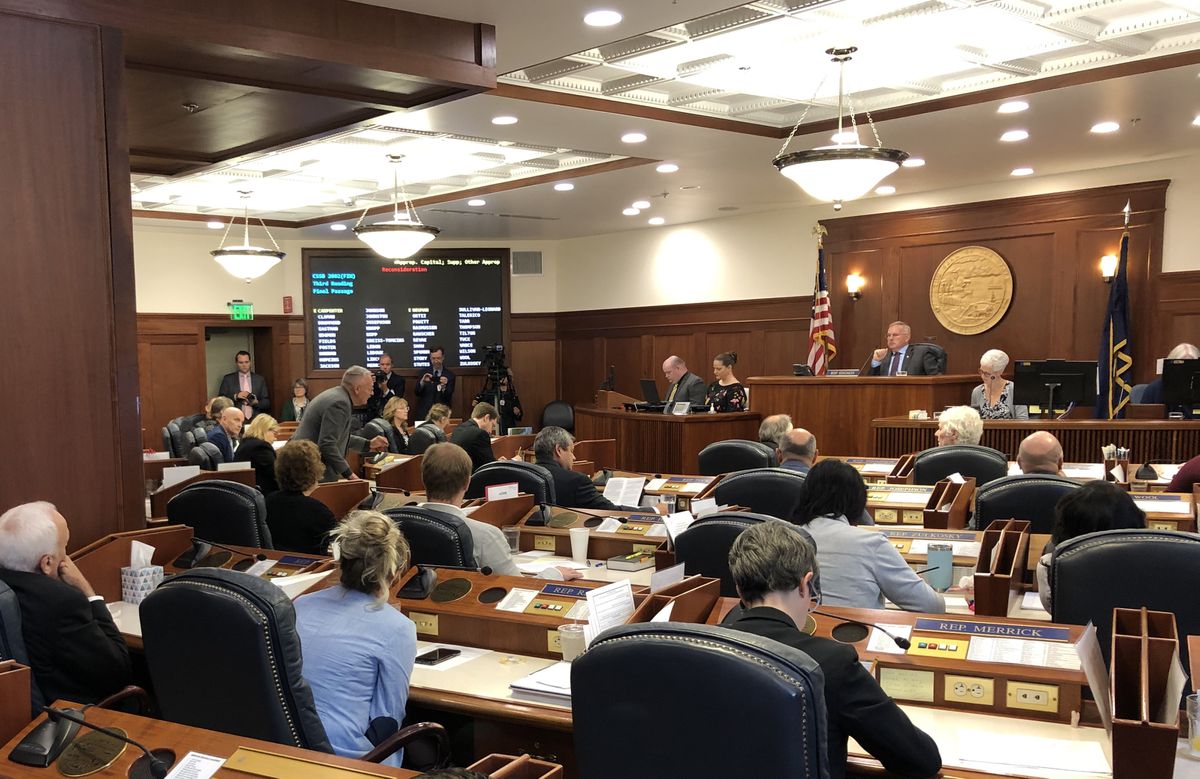 JUNEAU — In a 31-7 vote Monday, the Alaska House of Representatives approved legislation that fixes the state’s capital budget and reverse sweep.

Senate Bill 2002 passed the Senate 19-0 earlier this month and now goes to the governor.

Speaking to reporters Monday afternoon, Gov. Mike Dunleavy said, “We’re certainly glad we’ve got a capital budget that’ll take care of some of the issues that are outstanding.”

If the governor approves the bill, it would restore funding to the state’s college scholarship fund, rural power subsidies and the state’s new anti-crime legislation, among dozens of other programs. It also provides state matching funds to unlock hundreds of millions of dollars in federal grants for road construction, airport construction and other building projects across Alaska.

Dunleavy did not rule out the use of line-item vetoes for parts of the capital budget, saying that he and his staff will be analyzing the bill in the coming days.

“I think it’s a good thing we got this capital budget behind us,” he said. “I want to commend the Legislature for their work on the capital budget.”

The governor has 15 days to sign the bill once it is sent to his office. If the Legislature adjourns the special session before the bill is transmitted, he has 20 days to sign it.

The Legislature and governor have been working on four major fiscal challenges in the ongoing special session: the capital budget, the reverse sweep, the amount of this year’s Permanent Fund dividend and the governor’s decision to veto $444 million from the state operating budget. The latter two issues were addressed Monday in other legislation. The first two issues were the focus of SB 2002.

With all four topics addressed, the Republican House minority attempted to adjourn the special session Monday evening. The coalition House majority turned that request down for the time being. If lawmakers do not adjourn early, the special session is scheduled to expire Aug. 6.

Monday’s vote was the third time the House had attempted to approve SB 2002. Three-quarters of the House’s 40 members were needed to approve the reverse sweep and fund the capital budget from the state’s Constitutional Budget Reserve. Twice last week, lawmakers failed to reach the 30-vote threshold.

“What’s at stake is $1 billion in federal money tied to the capital budget,” Speaker of the House Bryce Edgmon, I-Dillingham, said shortly before the vote.

According to figures from the nonpartisan Legislative Finance Division, SB 2002 authorizes the state to spend $171.3 million, mostly from the Constitutional Budget Reserve, in order to unlock $1.03 billion in federal funds.

The bill also includes a section that prevents 54 separate program-specific savings accounts, according to a list from the Office of Management and Budget, from being automatically drained into the Constitutional Budget Reserve. This is the so-called “reverse sweep” vote.

That clause matters because the state’s operating budget relies on many of those accounts, and if they are drained, the Office of Management and Budget expects at least $115 million in operating budget holes would result.

“We have to pass it for the good of the state,” Rep. Adam Wool, D-Fairbanks, said about the bill on the floor.

Dunleavy proposed a one-time fix for those holes, but lawmakers found the governor’s fix was incomplete — some programs would still go unfunded. Last week, members of the Republican House minority proposed fixing the governor’s proposal by spending more money from the Alaska Permanent Fund, but the coalition of Republicans, Democrats and independents that controls the House turned down that idea.

Instead of the one-time fix proposed by the governor, the coalition approved a plan that preserves the program-specific funds, enabling the state to continue channeling specific sources of money to specific programs.

To boost the amount of money available for this year’s Permanent Fund dividend, the coalition funded the capital budget with savings rather than the state’s general fund.

Members of the Republican House minority objected to that plan.

Rep. Jennifer Johnston, R-Anchorage, responded to Wilson, pointing out that when Wilson was a member of the coalition majority and co-chair of the House Finance Committee, she wrote a capital budget that was funded with money from the Constitutional Budget Reserve.

After the vote, Wilson confronted Johnston on the House floor, saying that her bill didn’t include a clause allowing an additional $250 million to be spent from the Constitutional Budget Reserve on as-yet-unforeseen expenses, such as wildfire response or earthquake recovery.

The final vote on the bill came with the support of Rep. Dave Talerico, R-Healy, who arrived in the Capitol after a weeklong absence caused by an unspecified medical condition.

“It’s not an easy position for me because I’ve taken some very strong positions in the past,” Talerico said of his vote on the bill, but he explained that the “bulk of his constituents” have urged him to vote for it.

Last week, there were 29 votes in favor of SB 2002, one vote short of what was needed. Talerico provided an additional yes vote, and Rep. DeLena Johnson, R-Palmer, also voted in favor of the bill after opposing it in the previous two votes.