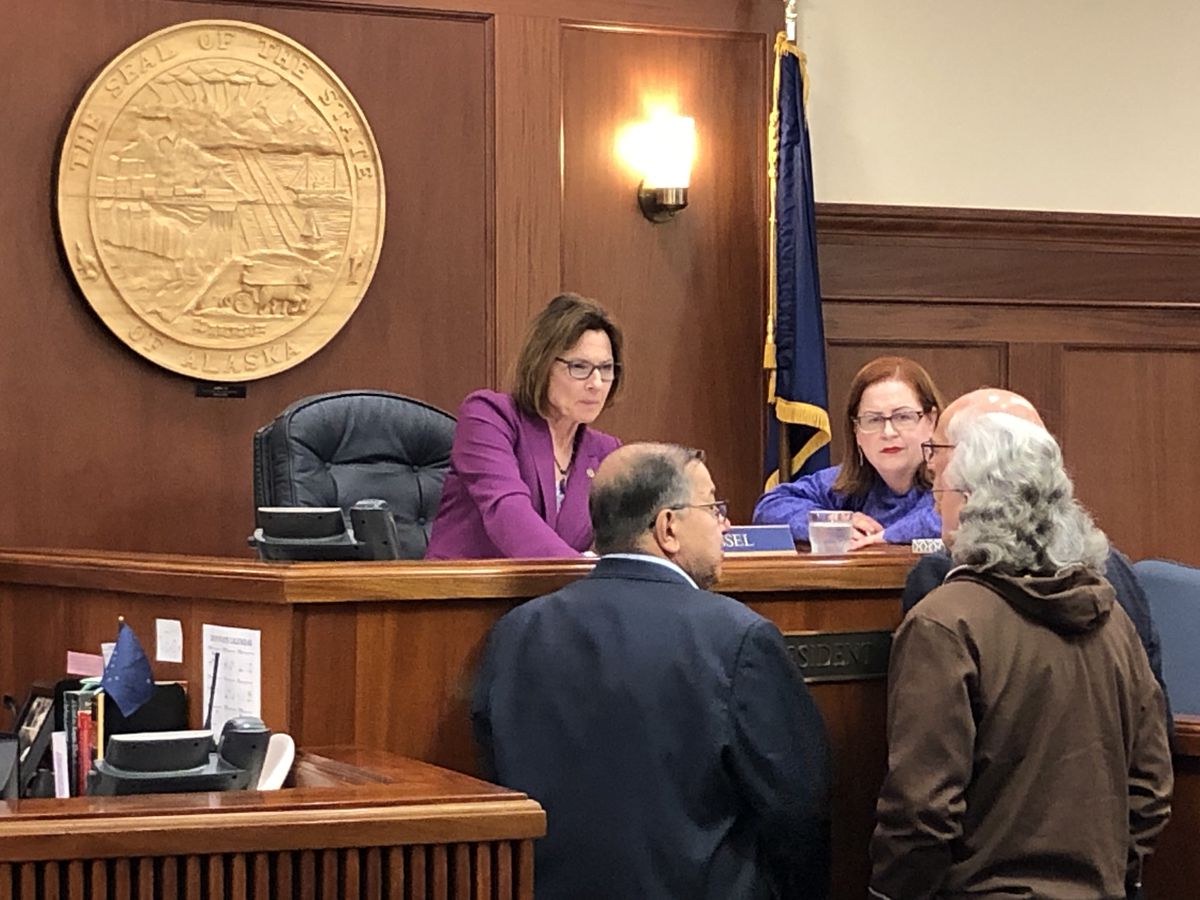 JUNEAU — The Alaska Senate voted 19-0 on Saturday to approve a fix for two of the four major budget issues facing the Alaska Legislature this summer, but it remains uncertain whether that fix has support in the Alaska House of Representatives. A House vote on the proposal could take place as early as Sunday.

“I think you could safely say that we’re unsure if there’s enough votes,” said Rep. Cathy Tilton, R-Wasilla and the leader of the minority Republicans on the House Finance Committee.

Senate Bill 2002, introduced by Gov. Mike Dunleavy and rewritten Friday by the Senate Finance Committee, would fix two problems created by the Legislature earlier this year that have left college scholarships unfunded, rural power subsidies endangered, and dozens of other state programs and services uncertain about their funding. Even if SB 2002 becomes law, significant problems remain to be resolved by the Legislature, including the amount of this year’s Permanent Fund dividend and whether or not the Legislature should reverse Dunleavy’s decision to veto $444 million from the state operating budget.

On Saturday, Sen. Natasha von Imhof, R-Anchorage and co-chair of the Senate Finance Committee, said SB 2002 is “a do-over. It’s a reset, if you will."

Earlier this year, the Alaska Legislature approved the state’s capital budget, but the House of Representatives failed to reach the 30-vote supermajority needed to fund the budget from the state’s Constitutional Budget Reserve. Members of the 15-member House Republican minority voted against the funding, saying the Legislature first needed to approve a $3,000 Permanent Fund dividend. With a majority of the Legislature opposed, that didn’t happen.

The minority also opposed a procedural vote known as the “reverse sweep” that prevents dozens of program-specific savings accounts from being automatically drained into the Constitutional Budget Reserve on June 30, the end of the fiscal year. With that drain in effect, more than $115 million in holes have been exposed in the state’s operating budget, and dozens of programs may shut down.

As Sen. Jesse Kiehl, D-Juneau, explained on the Senate floor, even such things as the licensing fees for barbers, hairdressers, architects and engineers could be affected.

“Reversing the sweep is extremely important and critical … no matter where you live in the entire state,” said Sen. Bert Stedman, R-Sitka.

Speaking on the Senate floor, Sen. Lora Reinbold, R-Eagle River, vocally dissented before voting in favor of the legislation.

She said the bill moved too quickly for her to offer amendments or fully understand its details. When she objected to the speed of movement, she said she was told that if she voted against the legislation, she could lose staff or her position as chairwoman of the Senate Labor and Commerce Committee.

“I feel like this is coercion, intimidation; immense games are being played behind closed doors,” she said.

As he and von Imhof explained, most of the language in SB 2002 is similar or identical to language in the partially failed capital budget approved by the Legislature earlier this year. (Dunleavy’s original draft had proposed funding programs from the state’s general fund rather than the Constitutional Budget Reserve — the nonpartisan Legislative Finance Division said Friday there was not enough money to do so.)

One of the key differences between the failed capital budget and the new document being considered this weekend is language that would allow the state to use up to $250 million from the Constitutional Budget Reserve on as-yet-undetermined needs. As senators explained, those might include earthquake recovery, wildfire fighting, or any need for Medicaid funding.

With 30 votes needed for the bill in the House, and only 23 members in the coalition House majority, the support of the Republican minority is necessary to advance the bill. Those lawmakers are reluctant to give up their votes without getting something in return, such as a Permanent Fund dividend paid using the traditional formula. Tilton is particularly concerned about the undesignated $250 million and an accompanying clause about debt.

“How does it look giving your CBR vote on something in the future you haven’t seen?” she said.

Reinbold, though not a member of the House since her 2018 election to the Senate, was disappointed that she was giving up her leverage.

“We don’t even get the full PFD vote first, which was what many people thought we were doing. … So we don’t have any leverage with our CBR vote any longer,” she said.

Shortly before 5 p.m. Saturday, the House Finance Committee heard and approved the draft of the bill approved by the Senate. The three members of the minority present at the hearing (Rep. Ben Carpenter, R-Nikiski, was absent) voted against advancing it to a vote of the full House.

Rep. DeLena Johnson, R-Palmer and the House minority whip, said Saturday afternoon that she had not yet begun to count votes to determine whether the bill will pass as written.

“There’s still much consideration going into that vote, so I don’t think it’s a done deal,” she said.

The House is scheduled to meet at 1 p.m. Sunday.