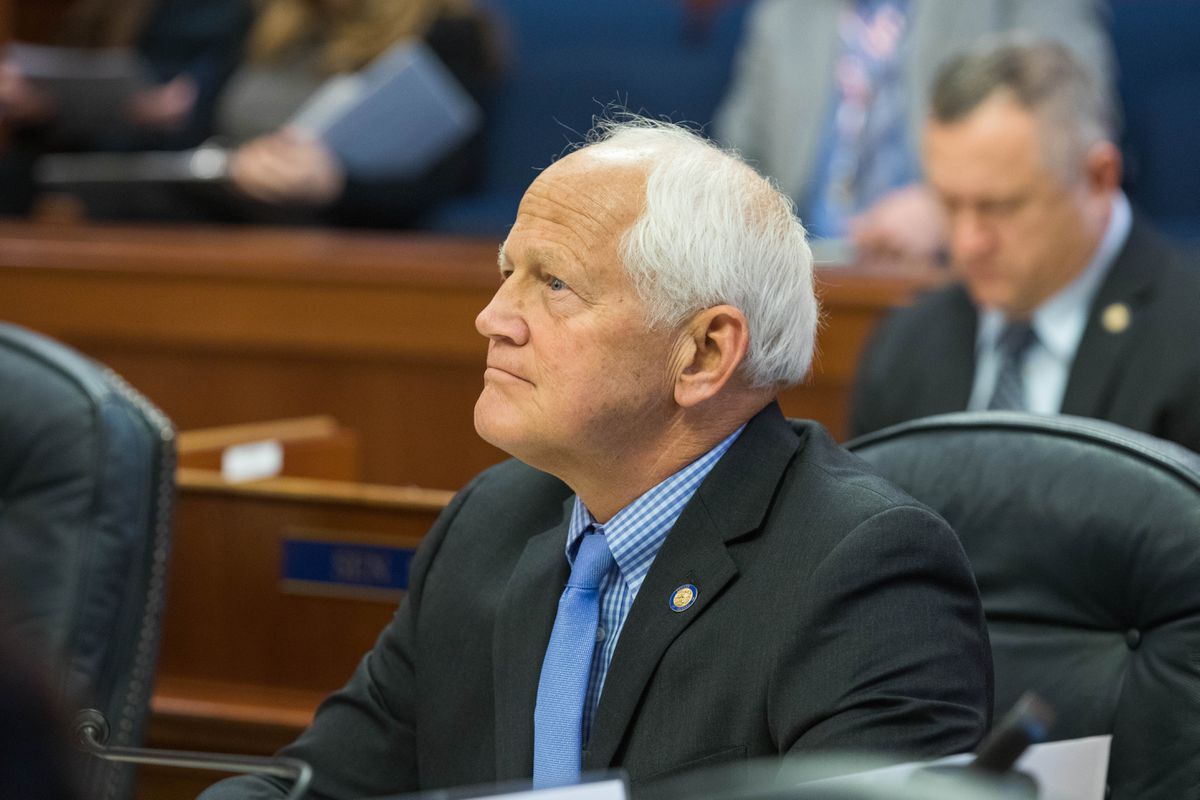 Birch was home in South Anchorage enjoying a normal day of chores, a walk and dinner with friends after extended time in Juneau for the special budget session when he experienced “severe chest pains,” his family said in a statement Thursday morning.

He was driven to the Anchorage Fire Department station on O’Malley Road around 7 p.m. and taken to the Providence Alaska Medical Center from there. He died around 9 p.m. at the hospital, surrounded by family.

“It was immediately determined he did not have a heart attack and as they were administering tests to determine the cause of the pain, he went into cardiac arrest and passed away from an aortic dissection, a torn or ruptured aorta,” said the statement, which was written by Birch’s son Logan, his wife, Pam, and daughter Tali.

The family is devastated, they wrote.

“The same optimistic, level-headed, steadfast, honest, gregarious, and positive public persona that so many of you knew, was the exact same husband, father, grandfather, brother, uncle, and friend that he was to all of us. He was the ultimate cheerleader and it is difficult to imagine this world without him.”

Birch, a Republican, was in his first term as a state senator and served as chair of the Senate Resources Committee. He was an avid hiker described as very fit by friends, who said that made his death all the more shocking.

“He was always a little bit worried about his heart. He always took extra care of himself, and he saw hiking and his diet as a way for him to be around for the long haul, which is why this is just extra tragic,” said Logan Birch by phone.

Gov. Mike Dunleavy, in a statement shortly after noon Thursday, said he has ordered state flags to fly at half-staff through Wednesday.

“Rose and I are deeply saddened to hear of the passing of Senator Chris Birch. Chris was a loving husband, father, and grandfather. His immense contributions to the communities and the state will always be remembered,” the governor said in the prepared statement.

Senate President Cathy Giessel, R-Anchorage, notified Birch’s colleagues of his passing by text message late Wednesday. Giessel in a statement Wednesday called his loss “devastating” to the state and described him as a “principled man of character, one who treated everyone with dignity and respect.”

Other legislators and constituents expressed their condolences and surprise.

Very shocked and saddened to hear that Senator Chris Birch died suddenly today. My deepest condolences to his family.

Cindy and Butch Moore, whose daughter Bree was killed by her boyfriend and became the namesake for a 2015 dating violence education law, praised Birch for his co-sponsorship of the bill amid opposition from others.

“I was privileged to work with him on #Breeslaw & was touched by his unwavering support,” Cindy Moore wrote on Twitter.

Sen. Shelley Hughes, a Palmer Republican, said she got a text from Giessel at about 10:15 p.m. Wednesday that Birch died of a heart attack.

“He was actually more health conscious than most,” Hughes said in a message. “He and his wife Pam loved to hike. Makes the news all the more shocking.”

He won a seat in the House in 2016 and the Senate in 2018, representing residents of the Huffman, O’Malley, Abbott Loop, Independence Park and East Dowling neighborhoods.

“He rapidly transitioned from a colleague to a friend,” Kopp said by phone.

“Chris’s smile was infectious and warmed people around him like a campfire on a cool night. His wife Pam and their kids and grandchildren were his highest joy. As a professional colleague I marveled at his capacity to do his work with the utmost courage during very difficult times. He was fearless, comfortable in his own skin, and honorable toward everyone,” Kopp wrote in a text message.

In Juneau, Birch was a frequent hiker with Kopp, Anchorage Republican Sen. Natasha von Imhof and others. In a statement, von Imhof described Birch as a “dear friend” who loved to hike, rain or shine, and carried that mindset to the Senate floor where he “didn’t shy away from the tough topics.”

Kopp also was roommates with Birch during several special sessions.

“Hiking was a very happy place for Chris, and he was conversational the whole way,” Kopp said. “Chris could talk endlessly about the geology of every rock, strata and outcropping along the way. He was a mining engineer, and he could explain it in such a way and with such enthusiasm that he would make you want to become a miner.”

By phone, Birch’s son Logan recalled that his father’s perpetual tan sometimes drew attention, with critics wondering if he was “out faking baking” at a tanning salon. No, Logan said.

“Just living in Alaska for the last 50 years, he just worships the sun like any of us do,” he said, and his father’s favorite outfit might have been a swimsuit with no shirt.

Rep. Laddie Shaw, a Republican who replaced Birch in the House, said by phone that he was “an honorable man. Decent. Caring. A man who truly loved his community, his state, his friends.”

“Every time we’ve crossed paths, he would reach out to me, and say ‘My Representative,’ and shake my hand. And I was always glad I was fit, because he had such a strong grip,” Shaw said.

He added that while Birch might have supported his opponent in last year’s Republican primary, the moment Shaw won, Birch “was just shining on and giving me his full support.”

“He could talk to you with differences on one day and absolutely respect you as a friend on the same day,” Shaw said.

Rep. Josh Revak, who represents the other House district in Birch’s Senate district, said by text message, “Chris filled every room with energy and enthusiasm. He was unwavering in his dedication and love for Alaska.”

By phone, Revak said he is “heartbroken for Pam and the family.”

“When everybody talks about Senator Birch … it’s easy to overlook the family, who’s really grieving and suffering during this difficult time,” he said.

Birch’s family came to Alaska in 1944, when his father was stationed in Adak with the U.S. Marine Corps, according to a bio on the Alaska Senate Majority website. His father returned to work as a mining engineer and his mother as a geologist.

Birch was born in Illinois but grew up in mining camps near Fairbanks and the Brooks Range and earned a bachelor’s degree in mining engineering and a Master of Science in engineering management from the University of Alaska Fairbanks.

Rep. Jennifer Johnston, R-Anchorage, has been friends with Birch for over 30 years, dating to when their families lived within a half-mile of each other in Fairbanks.

She recalled that while Birch would eat almost anything, he “really wasn’t a big pancake eater” because they were a staple of his childhood in the mining camps.

Birch was hired by the Alaska Department of Transportation and Public Facilities in 1974 at age 23, working as a right-of-way agent and then as building design manager for the department’s northern region. In 1987, he was named manager of Fairbanks International Airport.

“We went from nothing, to Anchorage becoming a major international hub for Federal Express almost ‘overnight,’” Bell said in an email.

He served on the Fairbanks North Star Borough Assembly for six years, including as presiding officer, leaving the body in 1990.

He is survived by his wife, Pam, two adult children and four grandchildren.

The family on Thursday expressed their gratitude to the Anchorage Fire Department and staff at Providence.

“My mom is blanketed with love and support from family and friends and we appreciate the kind words from so many of you near and far,” the family statement said. “Life is short and can change at any moment. He never missed an opportunity to give a hug, lend a hand, or spend time with his loved ones. My only recommendation is to try to live your life like Chris Birch did, I know we do everyday.”

Birch is the first Alaska lawmaker to die in office since Anchorage Democrat Max Gruenberg in 2016. He is the first senator to do so since Bettye Fahrenkamp in 1991.

By law and custom, Anchorage Republicans will submit the names of three possible replacements to the governor, who will make the final choice. The remaining 12 Senate Republicans can accept or reject Dunleavy’s selection.

Because Birch was elected to the Senate in 2018, his replacement will serve only until next year’s general election, according to state law. At that time, voters will select a permanent replacement.