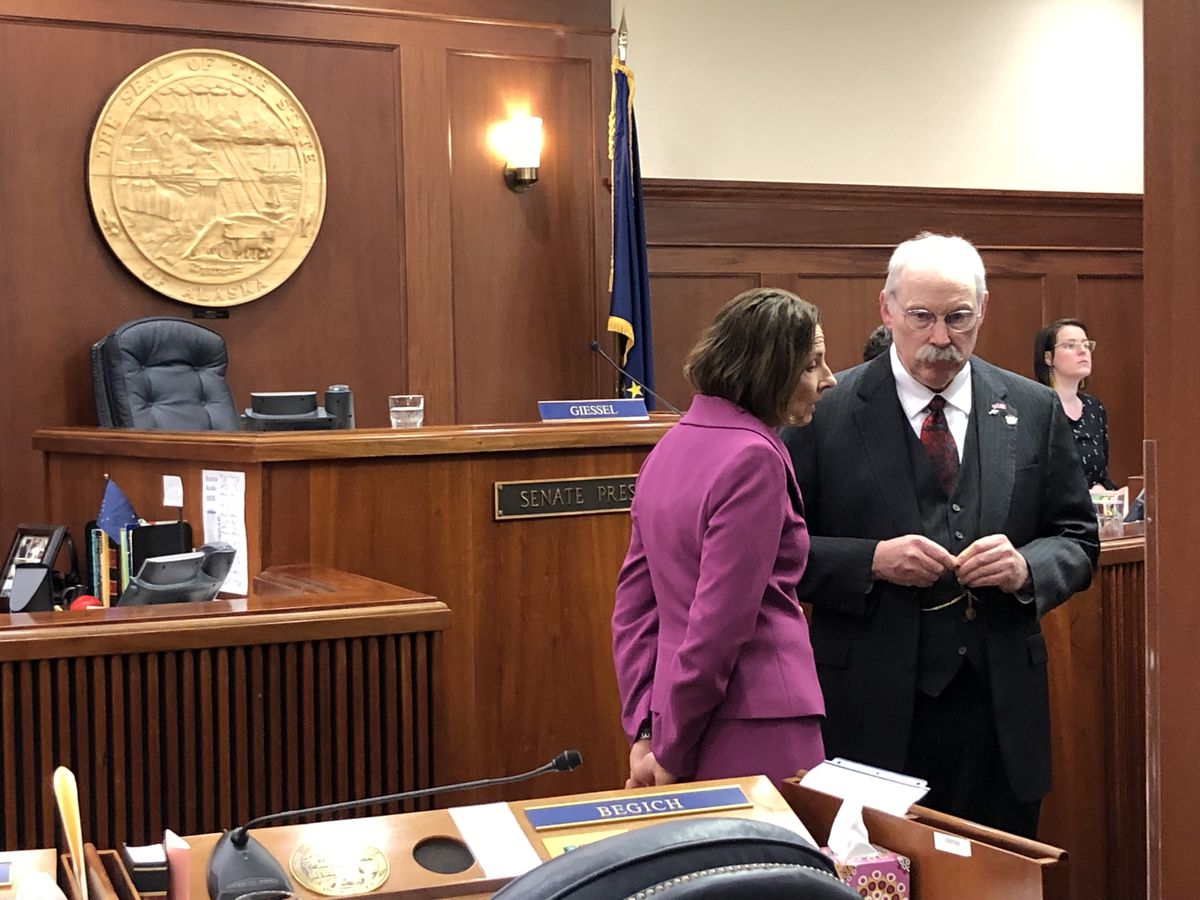 JUNEAU — A deep and continuing divide over the size of the Permanent Fund dividend ruptured the leadership of the Alaska Senate on Tuesday as three Republican senators were stripped of influential committee chairmanships that control the pace of legislation in the Capitol.

“This is an absolute restructuring of power in the Senate,” said Sen. Lora Reinbold, R-Eagle River.

The three — Reinbold, Sen. Shelley Hughes of Palmer and Sen. Mike Shower of Wasilla — were members of the 14-member, predominantly Republican Senate majority, and Reinbold said the result will be a “shift to the left” in the state Senate.

In addition to the shakeup at the top, two traditional-dividend supporters lost seats on the Senate Finance Committee, which shrank from nine members to seven.

The Senate’s changes were approved in a 13-7 vote opposed by all of the Senate Republicans who voted against dividend cuts last year. (Sen. Josh Revak, R-Anchorage, was appointed after last year’s votes and also voted against.)

Asked whether she and others would be leaving the majority entirely, Reinbold said, “That’s a discussion for another day.”

Senate Minority Leader Tom Begich, whose six Democrats were key to approving the shakeup, said no one has approached him about forming a coalition majority, as exists in the House.

Tuesday’s actions, which came as the Alaska Legislature convened in Juneau for the second year of its 31st session since statehood, were a response to events last year.

In July, Hughes and Shower were absent from a vote that set the 2019 Permanent Fund dividend. Reinbold cast the lone Senate vote against the proposal.

All three support a dividend paid using the traditional formula in state law, but last year’s vote set a smaller amount. Under the self-imposed rules that bind the members of the Senate majority, all three were required to vote in favor of the smaller proposal or face consequences.

Other senators support the traditional dividend but were unwilling to break the ground rules of the majority.

“That’s what I think a lot of this comes down to. We’ve stood our ground,” Shower said late Tuesday.

In a letter sent to her Senate colleagues, Reinbold said she interpreted the rule as requiring members to vote together only on budget bills, “not all additional appropriation bills,” such as the one containing the dividend.

In a speech on the Senate floor, Reinbold said she voted for the state’s capital budget and operating budget, as required.

“I never agreed to vote for all appropriation bills,” she said, and Shower later said he agreed with that interpretation.

Half of Reinbold’s majority colleagues, including the leadership of the group, interpreted their agreement differently.

“On July 29, three members exercised their free will, their freedom, to vote no on that budget, and that’s perfectly all right. … But it did violate that agreement,” said Senate President Cathy Giessel, R-Anchorage, equating the absence of Hughes and Shower to a “no” vote.

During a Jan. 4 legislative town hall meeting in the Matanuska-Susitna Borough, residents urged their local legislators to remain firm on the dividend and budget. At the time, rumors of possible consequences were already swirling.

“We need you guys to fight. Everybody here wants you guys to fight for us,” Russell Green of Palmer said, earning applause. “Whatever it takes. If you have to shut our state down to keep from compromising and making it go even worse than it is, then do it.”

After Tuesday’s moves were officially announced, a Republican district chairwoman in Shower’s region urged her fellow Republicans to write letters against the move, saying in a newsletter that she was “so very disappointed.”

In the House, the session began with ceremony and little of the drama that occurred last year, when members deadlocked and were unable to select a speaker of the House until February.

Members of the Republican minority objected to changes in the membership of the House Joint Armed Services Committee, saying that with Revak’s departure for the Senate, his slot should be taken by one of the House’s veterans rather than Rep. Gabrielle LeDoux, R-Anchorage.

Rep. Geran Tarr, D-Anchorage, and Rep. Mel Gillis, R-Anchorage, were excused absent from the first day of session. Gillis was appointed during the interim to replace Revak, but his wife suffered a medical emergency and he had to leave the Capitol, the House minority press secretary said. Tarr was ill, her staff said.

Correction: House Republican minority members objected to the makeup of the House Joint Armed Services Committee, not the Committee on Military and Veterans Affairs.