How would Alaska’s lottery work? Here are two plans being debated. 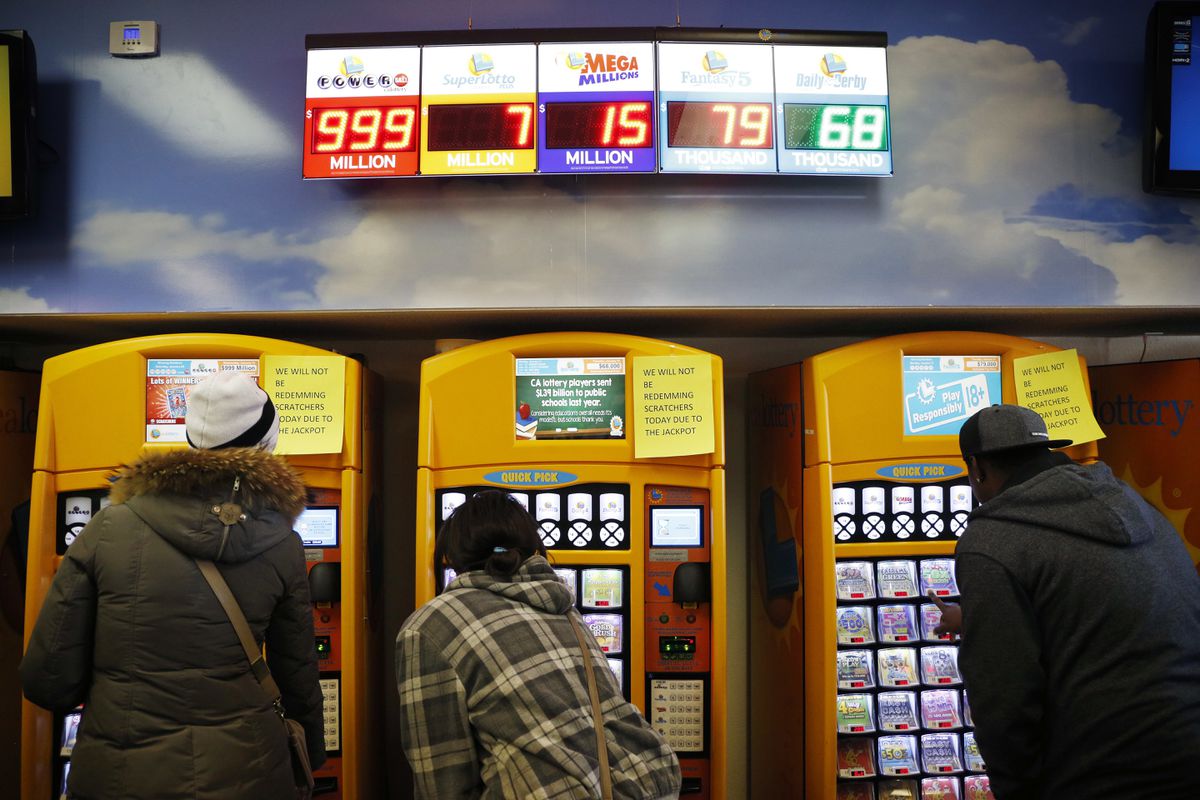 JUNEAU — Alaska is one of five U.S. states without a lottery. This year, Gov. Mike Dunleavy and House Majority Leader Steve Thompson, a Republican from Fairbanks, have each offered plans to change that.

With Alaska state government projecting a $1.5 billion budget deficit, both men have said a lottery could be one step toward a broader fix. But both have proposed very different approaches.

Thompson is suggesting a draw-style lottery that would raise between $8 million and $10 million a year for the treasury. The governor has a bigger vision.

“Depending upon what it finally looks like, it could raise anywhere from $15 million to $100 million,” Dunleavy said in a late-January interview. “That can help. That can help with things like education, seniors, homelessness, women’s shelters,” he said.

As the Legislature considers what path to take — if any — there are many unanswered questions. Lawmakers would have to decide where the money will go, how the lottery would be run, what games would be offered and what the state would do to offset the dangers of gambling addiction. It’s unclear how deep support is among legislators for the broad idea of a lottery or whether to seriously consider it in the current session.

In addition, Alaska already has a vibrant nonprofit gaming industry, with everything from bingo and pull tabs to salmon derbies and the Nenana Ice Classic. Will that industry suffer if it has to compete with a lottery?

There is no instruction manual for states to follow in setting up a lottery, but there are plenty of prior examples. In 2014, Wyoming created a lottery similar to the plan envisioned by Thompson. Last year, Mississippi launched its own lottery under rules not too dissimilar from the Dunleavy’s plan.

In a series of interviews, officials in those states said the process of starting a lottery begins with a single question.

“How much money does Alaska hope to make from a lottery? That is really going to drive what the gaming portfolio is going to look like,” said Jon Clontz, CEO of the Wyoming Lottery.

If the expectation is a few million dollars, then the state can limit itself to things like Powerball and a statewide draw-style lottery, Clontz and other experts said. If the state wants more money, it needs to allow more gambling — things like scratch-off tickets, video lottery and keno. (The governor has also suggested that the state could allow sports betting.)

Ban those things, Clontz said, and “that’s like having a soda pop store and only selling one brand.”

[Five myths about the lottery]

In the United States, lotteries are an $80 billion business, but most of that figure — about $52 billion — comes from things like scratch-off tickets and other so-called “instant-win games," said Sam Wakasugi, a vice president at Las Vegas-based Scientific Games, which controls almost three-quarters of the scratch-off business in the nation.

That national pattern applies to the state level. When the administration of former Gov. Bill Walker considered lottery legislation, it estimated Alaska would earn about $8 million per year if it set up a draw-style lottery (including Powerball and Mega Millions) but didn’t allow scratch-off tickets.

That would come from an estimated $30 million in sales, a fraction of Alaska’s existing gambling industry. According to figures from the Alaska Department of Revenue, Alaskans in 2018 spent $378.9 million on pull-tabs, bingo and other types of legal gambling.

While Alaska has a rich history of legal and semi-legal gambling in its territorial years, gambling has been mostly illegal during statehood. The Alaska Legislature legalized charitable lottery-style games on a limited basis in 1960, in part to allow the Nenana Ice Classic — the annual contest to guess ice breakup on the Nenana River — to continue after statehood.

At the time, Gov. Bill Egan was so concerned about the “total legalization of all-out statewide professional gambling” that he vetoed a first version of the Ice Classic legislation.

In a letter at the time, Egan said he feared the “unsavory syndicates and racketeering that inevitably follow” gambling.

The state has repeatedly considered and rejected the idea of a broader lottery out of fears that it would open the door to more gambling. In 1966, when a lottery bill failed to pass the Legislature, the Anchorage Daily Times referred to the legislation as “an insidious plot against Alaska.”

One of the company’s vice presidents was Dan Sullivan, a future Anchorage mayor.

“After two years, we came to an end, but it was an interesting experiment and showed it can work,” he said of the lottery.

Even during that brief experiment, Alaskans remained skeptical of gambling. In August 1990, a ballot initiative asked voters statewide whether they wanted to legalize gaming and establish a state gambling board. The measure failed by a wide margin.

As Alaska balked, other states moved ahead with their own lottery plans. The standard practice — one used by Wyoming and Mississippi, among other states — is to set up a state-owned corporation to run the lottery, then have that corporation hire a private firm to run the random-number generators, ticket printers, satellite communications equipment and everything else a lottery needs to operate.

“Getting into the lottery business is not an easy thing in terms of capital,” Wakasugi said.

In Wyoming, legislators were unwilling to give the corporation any money, so it borrowed $3 million. That money was paid back in 16 months with lottery proceeds.

Dunleavy’s approach envisions a similar timeline. In the first year, the state would set up the corporation, which would design regulations and hire help. In the second year, gambling would begin and the corporation would pay back the state. In the third year, things would be up and running in full.

None of the three said they had previously been aware of Alaska’s plans. Jay Gendron, IGT’s chief operating officer for lotteries, said in a prepared statement that the corporation is “watching the legislative activities in Alaska with great interest.”

In a typical state lottery, whether draw-style or instant-win scratch-off, the local corporation hires one of these larger firms to do the lottery’s legwork in exchange for a portion of the proceeds. The company’s take varies based on how many services it provides and how hard it is to provide them.

“It really is dependent upon what Alaska decides to do,” Wakasugi said.

Gendron said something similar: “While many aspects of operating a state lottery are similar, each state has unique requirements in creating a lottery entity that meets their policy objectives.”

Contracts based on proceeds create an “alliance” between the state and the contractor, Wakasugi said, because both are then interested in boosting sales.

How much will a contractor cost?

In Wyoming, the state’s first contract handed over 11.89% of all ticket proceeds, and Intralot took care of almost everything. As a result, Wyoming’s lottery corporation has just eight employees.

Mississippi’s lottery has about 50 employees, a spokeswoman said, in part because it kept marketing and advertising in-house.

Dunleavy’s administration estimates a figure between those two.

“At least 10-12 positions would be needed in the corporation for certain legal, oversight, and administrative tasks that cannot readily be outsourced," said an analysis published by the Alaska Department of Revenue. "If most work is instead done in-house, the corporation may need 25 or more employees.”

Clontz speculated that Alaska could expect to pay more than that.

“You’ve got a huge area to cover, a difficult, challenging geographic area. You have to get technicians and field services staff. They have to think about what it’s going to take to provide that logistical support,” he said.

Though Wyoming’s overhead is higher than other states’, the lottery has still turned over millions to its state treasury. Its startup loan was paid off in 16 months, and according to corporate documents, the lottery corporation transferred $16.9 million to the state treasury between April 5, 2016, and Oct. 5, 2019.

Wyoming has an adult population of about 350,000. Alaska’s is about 547,000. If residents of both states buy lotto tickets at the same rate, and if Alaska’s expenses were the same, Wyoming’s experience extrapolates to about $8.8 million per year for Alaska.

“It’s essentially free money with zero costs to the citizens and zero time costs to the government,” Clontz said.

Not everyone agrees with that statement. Soon after Dunleavy announced his support for a lottery, Democrats in the Alaska Senate said it would amount to a tax on poor Alaskans.

“It causes me grave concerns, it really does,” said Sen. Jesse Kiehl, D-Juneau.

“We’re already raising money in ways that take more money proportionally from low-income Alaskans,” he said, referring to Permanent Fund dividend cuts used by the Legislature since 2016 to balance the state budget.

Senate Minority Leader Tom Begich, D-Anchorage, said the Senate Democrats do not have a caucus position on the lottery, but he has not heard them talk favorably about it.

House Minority Leader Lance Pruitt, R-Anchorage, said his own caucus is split about the idea of a lottery.

Scientific research published in the Journal of Gambling Studies indicates that poorer Americans tend to gamble more often. Other studies indicate there are more cases of problem gambling in places where more types of gambling are allowed.

“When we’ve done that research in Wyoming, that is not the information that comes back to us," Clontz said.

Market research conducted by the Wyoming Lottery found more than half its tickets were bought by people who earned more than $50,000 per year and most buyers were from “middle America,” between 35 and 55 years old.

When it comes to lottery drawbacks, he sees market competition — rather than social ills — as the main concern.

“I think some of the downsides are, it is going to compete a bit with traditional games like bingo and pull-tabs, but I don’t think the impact is huge,” he said.

“It is still a fact that I have had zero complaints regarding pull-tab sales and our products,” he said in a Feb. 13 email to Thompson’s office.

Sandy Powers owns and operates Big Valley Bingo in Wasilla and is the president of the Alaska Charitable Gaming Alliance, a new trade group representing the state’s bingo and pull-tab businesses.

If the state were to institute a lottery like Powerball or Mega Millions, “I don’t think it would be that significant,” she said.

If the state were to add scratch-offs and video lotto, as under the governor’s plan, the association’s concerns would grow. Based on a conversation with Thompson, she believes the governor’s proposal will involve some of those things.

“I’m not really keen on the governor’s one,” she said.