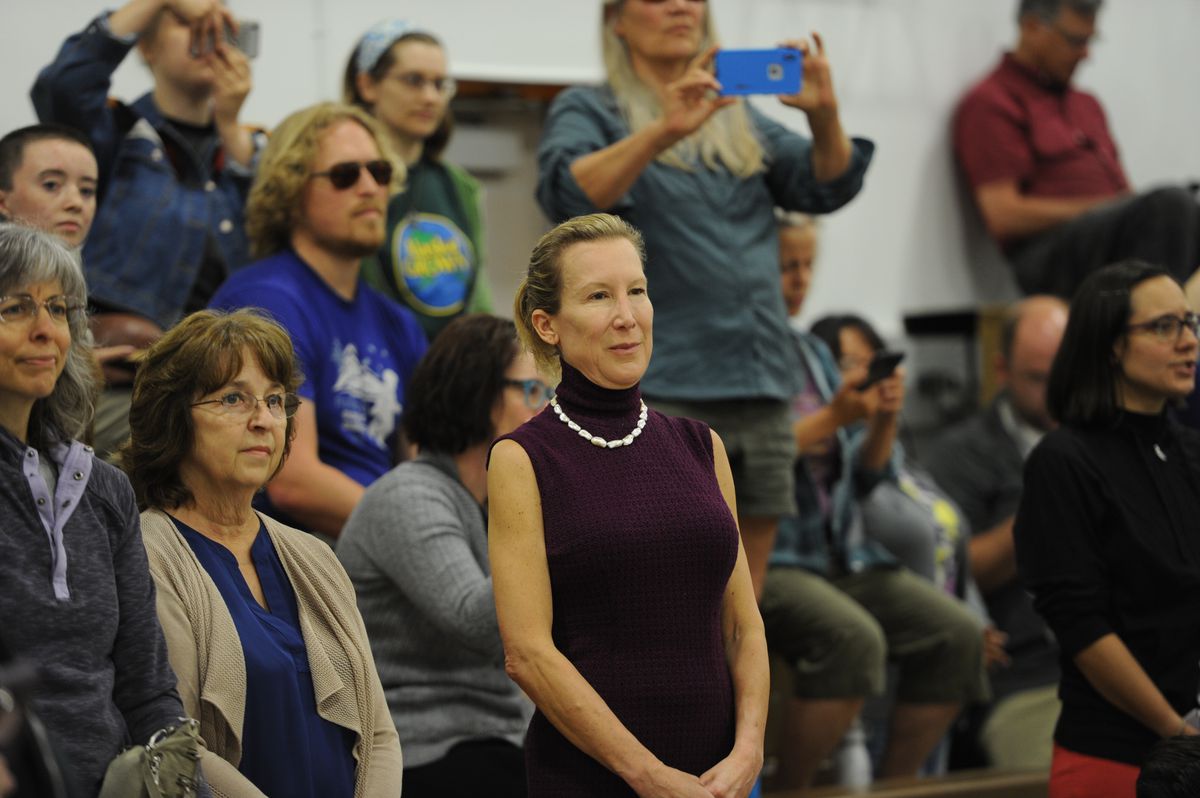 Hosted by three conservative groups, the seminar attracted 36 Republican and Libertarian legislators and candidates, organizers said. With a third of the Alaska Legislature on hand, some attendees said it was the largest gathering of lawmakers and prospective lawmakers they had seen this election season.

Sen. Bill Wielechowski of Anchorage was the lone Democratic lawmaker to attend any of the event.

“My guess is they’re laying the groundwork for what they want to do, or at least what a portion of the people want to do,” he said.

Alaska is projecting a budget deficit of at least $2 billion if legislators and the governor approve a traditional Permanent Fund dividend, but with the state’s Constitutional Budget Reserve effectively empty, it will be difficult to pay that dividend without other major changes.

In a series of talks, Arduin and others spoke about the options available to the Legislature. Some of those options, such as diverting local petroleum property taxes, spending from the account that subsidizes rural electricity, or spending additional money from the Alaska Permanent Fund, have previously been discarded by the Legislature.

Her talks weren’t a recipe for next session, Arduin said. “It was intended to be nonpartisan and an education,” she said.

She spoke only as a consultant and not as an advocate of any particular option, she said.

David Boyle, another speaker, said he was trying to both inform and advocate. “It was probably correct to say I was doing both,” he said.

The seminar took place Sept. 12-13 at the Sunrise Grill in Palmer and was sponsored by three conservative groups: Alaska Roundtable, Alaska Politics Explained, and United For Liberty.

Libertarian activist Michael Chambers founded United For Liberty. He picked Palmer in part because it was beyond the bounds of Anchorage’s public health restrictions. Boyle is behind Alaska Politics Explained, and Ric Davidge is the founder of Alaska Roundtable. Boyle said both of their groups had a more supportive role.

Chambers has been urging candidates to promise that they will support a $3,000 Permanent Fund dividend in 2021, plus retroactive payments. Dozens have signed that promise, and many appeared at the seminar, paying $75 apiece to offset the cost of renting the space and flying Arduin to Alaska from her home in northern Michigan.

“She presented four or five times in a two-day period. I designed it around her — obviously, you don’t get Donna Arduin all the time,” Chambers said.

Dunleavy hired Arduin in November 2018 to serve as director of the Office of Management and Budget. After the governor proposed balancing the budget with vast budget cuts and tax revenue diverted by local governments, she became a focal point for opponents of the governor’s plan.

Many Alaska conservatives loved her ideas and continued to embrace her as a symbol, even after the governor dismissed her in late 2019. Some Republicans sought her endorsement in the August primary and she has stayed in contact with Chambers, who considers her a friend and invited her to talk.

“We want to give them the tools to let them know there’s multiple options out there,” she said of the lawmakers and candidates at the event.

Networking before next session

Sen. David Wilson, R-Wasilla, paid $75 to attend but found himself invited to talk about health care. For the past two years, he’s been chairman of the Senate Health and Social Services Committee and a member of the Senate Finance Committee.

“It was just talking about what changes need to be made to our Medicaid system,” he said, explaining that some Medicaid services Alaska provides are considered optional in other states. Last year, the Dunleavy administration attempted to end optional dental services as a cost-cutting move, then reversed itself after running into federal regulations and public opposition.

He and others said they were interested in networking. Seven Republican incumbents lost their primary election races in August, and four other incumbents are not running for re-election.

While all the primary winners must also win the Nov. 3 general election to be seated, many are in Republican-leaning districts that are almost certain to elect a Republican.

“It was an opportunity to maybe build some bridges," said Wielechowski, who spoke for an hour about his unsuccessful lawsuit about the Permanent Fund dividend formula.

"There were a lot of people there — like a third of the Legislature — and there’s a good chance they’re going to be in power next year, at least some of them,” he said.

Myers said his biggest takeaway from the event was that “for the last 40 years, we’ve just thrown money at a lot of problems, and we’ve required very little accountability.”

Boyle was “particularly concerned with the education budget and how we’re spending so much on education and getting so little out of it,” Myers said.

K-12 education spending is the largest piece of the state budget when considering state tax-funded spending. (If federal spending is included, it’s No. 2, behind health care.)

In a talk radio interview after the seminar, Arduin said she doesn’t like to use the word “cuts,” instead preferring to talk about “reform.”

Most policy changes can’t be done in a year, leaving this year’s deficit as a problem.

“If you’re going to rewrite K-12 or Medicaid, you’re just going to need time. Even with the university … it takes them a year to make any changes,” she said by phone.

The state’s principal savings account, the Constitutional Budget Reserve, will be effectively empty by June 2021.

On talk radio, she said Alaskans shouldn’t see that as a recipe for doom and gloom. Lawmakers can use the Permanent Fund’s earnings reserve and other reserved funds to make ends meet while they make cuts.

The state has almost $2 billion available in accounts reserved for things like the state’s Power Cost Equalization program — which subsidizes rural electrical prices — plus the accounts of state corporations like the Alaska Industrial Development and Export Authority and the Alaska Railroad.

“There’s money available for a glidepath,” she said.

Ed King, the state’s chief economist under Arduin, is an independent candidate for state House in Juneau and spoke at the event after paying his own way.

While Arduin is staunchly anti-tax, King isn’t, and he told attendees that fixing the state’s deficit through cuts alone isn’t possible.

“Anybody who thinks they can get out of this without changes to the PFD and some new taxes is crazy,” he said.

[Related: As Alaska’s budget uproar rolls on, a top Dunleavy adviser has seen it before]