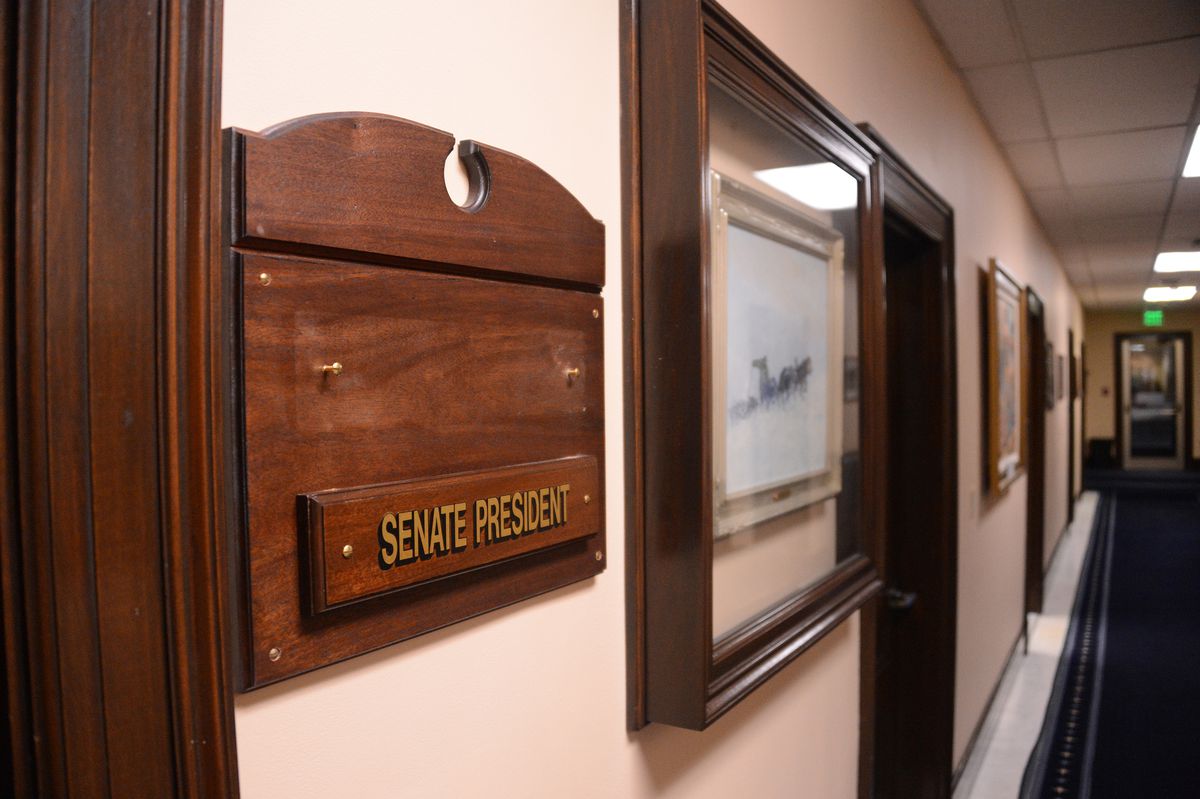 The office of the Senate President bore no nameplate on Monday, Jan. 11, 2021 as Senators had failed to name new leaders. (James Brooks / ADN)

The office of the Senate President bore no nameplate on Monday, Jan. 11, 2021 as Senators had failed to name new leaders. (James Brooks / ADN)

JUNEAU — Days before the start of the 32nd Alaska State Legislature, the Alaska House and the Alaska Senate are leaderless, leaving the Legislature unable to address pressing state issues.

“There’s nothing new to report,” said Rep. Bryce Edgmon, I-Dillingham, the House speaker for the past four years.

With neither half of the Legislature organized, lawmakers will be unable to consider Gov. Mike Dunleavy’s proposal to pay nearly $5,000 to each Alaska resident this year. Election-reform measures proposed by Republicans cannot be advanced. Police-reform measures supported by Democrats will also languish.

COVID-19 response measures supported by both parties can’t be considered. Meanwhile, more than 1 in 10 Alaskans are out of work.

In the worst-case scenario, moribund leadership could leave the Legislature unable to resolve the state’s budget deficit and pass a balanced budget. Without a budget, state government — and critical services including health care, airports, ferries and wildland firefighting — will run out of money and potentially shut down on July 1.

“Alaskans are struggling. And they already have doubts about whether or not they can ever look up to the Legislature and see someone who represents them effectively. And here we are proving it to be the case by not being organized when session starts,” said Sen. Peter Micciche, R-Soldotna.

The Alaska Senate has never gone this long after an election without selecting a Senate President. Two years ago, the Alaska House was unable to agree on a leader for nearly a month.

“Nobody wants to repeat two years ago. So I think that everybody’s gonna be a little more motivated. We don’t want to take 30 days to do this. So there’s more motivation right now,” Thompson said.

Motivation is easy to find, but progress is not. In the week before the Legislature’s Jan. 19 start date, elected members of the House and Senate have been talking by phone, in person and by the videoconferencing program Zoom, but have not been able to reach agreement.

In interviews, multiple legislators said they have higher hopes for organization after this weekend, when all 60 lawmakers will be together in person.

In the 40-person House, 21 votes are needed to elect a leader, who then may appoint members to each of the Legislature’s many committees. Because each piece of legislation typically passes through multiple committees before reaching a final vote, the membership of those committees is hotly contested.

“We all want to be in the majority,” said Rep. George Rauscher, R-Sutton.

This year, Rauscher introduced nine bills before the start of the session. If he’s in the majority, those bills have a good chance to be heard by committees and advance toward becoming law.

If he’s not, those bills might languish. Two years ago, he prefiled nearly a dozen bills, but when a coalition majority formed a month into session, he stayed with the Republican minority. None of his bills became law.

The House is currently divided between a bloc of 20 Republicans and an opposing bloc that features Democrats, independents and a lone Republican.

“Nobody’s organized. We don’t know when they’re going to organize. We have some very, very strong, passionate feelings amongst people on the Permanent Fund dividend and the budget,” said lobbyist Kevin Jardell.

In the 20-person Senate, 11 votes are needed to elect a leader. Republicans hold 13 seats in the Senate after this year’s elections, but those Republicans are divided 9-4 (or 8-5, depending on the day and who you ask) by differing views on the Permanent Fund dividend and the state budget. Those divisions have lasted so long that they’ve created conflicts of trust and personality.

On the larger side, the leading figure has been Micciche, who as of Friday was the leading candidate for Senate President if Republicans can muster 11 votes on Tuesday.

That isn’t guaranteed. The Republicans on the smaller side of the divide — Sen. Bert Stedman, R-Sitka, in the lead — have begun talking with the Senate’s seven Democrats about the possibility of a bipartisan coalition majority.

“Micciche and myself are kind of the two negotiators, for lack of a better term,” Stedman said.

“Clearly I’ve been working with Micciche for over two months, and we are having discussions with the Democrats over the last several days,” he said.

Senate Democrats have deferred to Sen. Tom Begich, D-Anchorage, as their lead negotiator. He said he believes there’s a “sincere interest ... to truly build what I would call an Alaskan coalition, which would be a bipartisan coalition.”

Begich said he’d prefer to have as large a coalition as possible, and some members of the House have made similar comments. Reps. Chris Tuck, D-Anchorage, and Bart LeBon, R-Fairbanks, have each said they’d like to see a 30-person coalition that includes members of both parties and independents.

In the August state primary, several Republicans who participated in last year’s House coalition were voted out of office by Republicans who felt they were insufficiently loyal to their party.

“My constituents are very conservative. ... They want us to organize together. Do they want us to work across the aisle? Of course they do. But they also want us to stay true to the philosophies that we ran on,” Micciche said.

“If you’re in a caucus, even if you’re in leadership, and it’s a caucus with all of the committee chairs as Democrats, it’s very difficult to move conservative policy, just based on the way that our system works. You know, it’s hard to keep your promises when you do that,” said Rep. Sara Rasmussen, R-Anchorage.

Rasmussen, who represents Anchorage’s Sand Lake neighborhood, said her constituents want good government services, even if it means a smaller Permanent Fund dividend. That’s a position that puts her at odds with some of her Republican colleagues, but she said that this year, every legislator is going to have to give and take.

“There’s going to be some tough choices this year. And everybody’s going to have to make compromises,” she said.