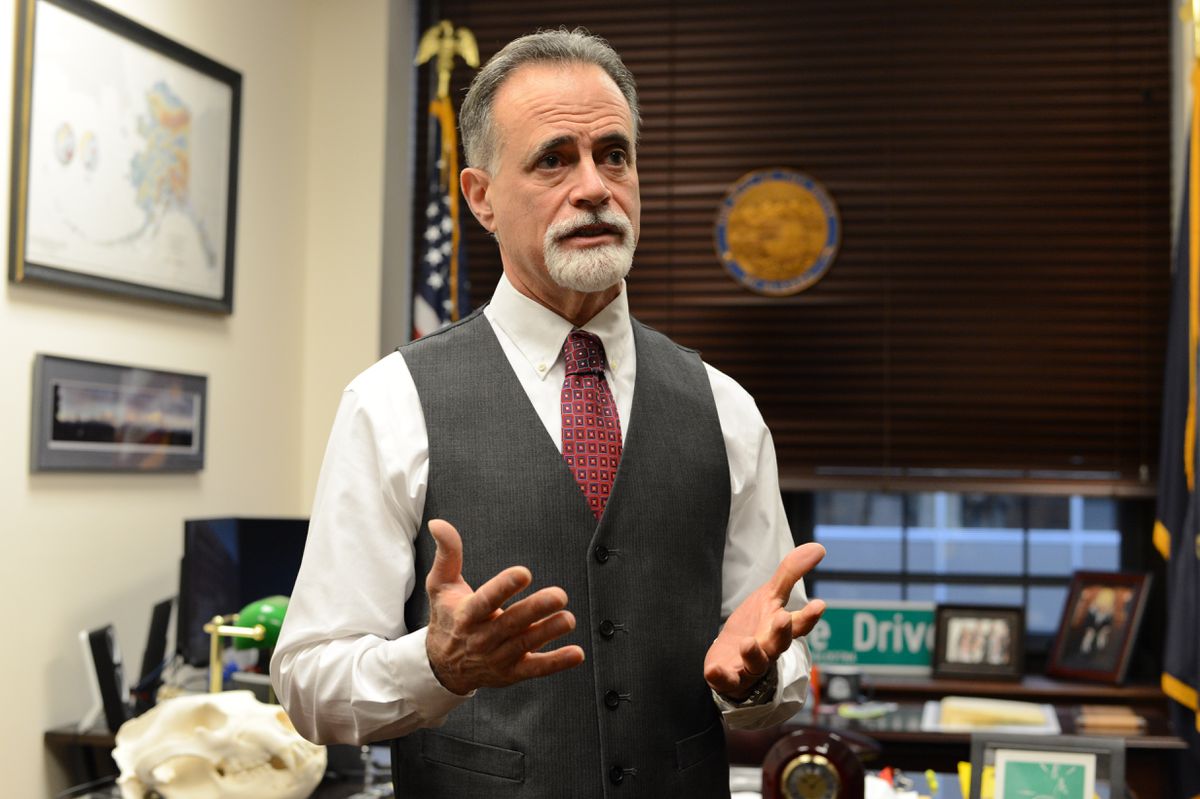 Sen. Peter Micciche, R-Soldotna, talks to reporters in his office after announcing his selection as Senate President on Tuesday, Jan. 19, 2021. (James Brooks / ADN)

Sen. Peter Micciche, R-Soldotna, talks to reporters in his office after announcing his selection as Senate President on Tuesday, Jan. 19, 2021. (James Brooks / ADN)

JUNEAU -- The Alaska Senate’s 13 Republicans have ended a two-month leadership dispute and confirmed their control of the Senate as the 32nd Alaska State Legislature opened on Tuesday in Juneau.

The 40 lawmakers of the Alaska House of Representatives are still divided 20-20 and unable to work on legislation.

Separate disputes had threatened to leave both the House and Senate unable to work on most of the state’s pressing issues, but in a closed-door meeting Tuesday morning, the Republicans named Sen. Peter Micciche, R-Soldotna, the new Senate president. The decision was confirmed with a unanimous vote on the Senate floor.

“It looks like we have been successful on a Senate Republican majority,” Micciche said.

“And today, on the first day of session, we are in fact ready to go to work,” he said.

Eleven votes are needed to elect a Senate president, but the Senate’s 13 elected Republicans have been divided for months by disputes over the Permanent Fund dividend and state budget.

Sen. Tom Begich, D-Anchorage, will be the Senate minority leader. As Republicans announced their organization, he said he was disappointed that the Senate failed to create a coalition that includes both Democrats and Republicans as leaders.

“I think you could have put together an all-Alaska coalition that would have been great, but I think we will work well together,” he said.

The Senate convened just after 10:30 a.m. Tuesday, with Lt. Gov. Kevin Meyer issuing oaths of office. Each senator wore a mask and, as they took their oaths, eschewed the typical closely spaced line and instead spread themselves throughout the Senate chamber.

Late last week, the nonpartisan Legislative Affairs Agency sent an email to legislators and staff warning them that one Capitol worker has already tested positive for COVID-19.

Though the public remains banned from the state Capitol, the session has brought dozens of legislators and staff together from all parts of Alaska. To keep the pandemic from spreading, those in the Capitol are being tested for COVID twice per week and are screened daily for fever and symptoms.

Masks are mandated for legislators in the House and Senate chambers, and violators can be punished with steep fines — $250 for a first offense, and $500 for subsequent offenses.

The mask policy has holes, however: Legislators can set the rules for their own offices, and many don’t require masks there. On Tuesday, legislators also were allowed to remove their masks as they took their oaths of office.

One member of the media at a time is being allowed to observe proceedings in the House and Senate chambers, a change from earlier restrictions that banned all outside observers. The chambers do contain microphones and robotic cameras, but access is controlled by the Legislature.

The Alaska House of Representatives convened just after 1 p.m., again with Meyer issuing the oaths of office.

The House is divided 20-20 between a bloc of Republicans and a bloc that includes Democrats, independents and one Republican. Twenty-one votes are needed to choose a speaker of the House.

Illustrating the divide, the House failed to confirm Rep. Bart LeBon, R-Fairbanks, as temporary Speaker of the House. That act that would have allowed the lieutenant governor to return to his normal duties while the House continues to debate who will be its permanent leader.

“You guys must like me,” Meyer said after LeBon’s nomination failed, 20-20.

The House is adjourned until 10 a.m. Thursday.

“For the foreseeable future, there will be a deadlock,” said Rep. Bryce Edgmon, I-Dillingham, and the de facto spokesman for the coalition bloc.

With the House unable to work, the Senate will set the agenda for the Legislature’s opening days. That work will be slowed by the Senate’s late organization.

Committee leaders determine what legislation advances or fails, and those leaders have not yet been named. After Micciche was voted Senate President, the new majority released the names of several other leaders.

The Alaska Senate does not normally have a whip, but the majority is operating this year on a nonbinding basis — members are not required to vote together on the budget, though they are expected to, Micciche said.

Sens. Bert Stedman, R-Sitka, and Click Bishop, R-Fairbanks, will be in charge of drafting the state budget as leaders of the Senate Finance Committee.

Sen. Gary Stevens, R-Kodiak, as leader of the Rules Committee, will be in charge of what bills are scheduled for a vote of the full Senate.