New proposal from Wasilla senator would limit by-mail voting in Anchorage, Juneau and other Alaska cities 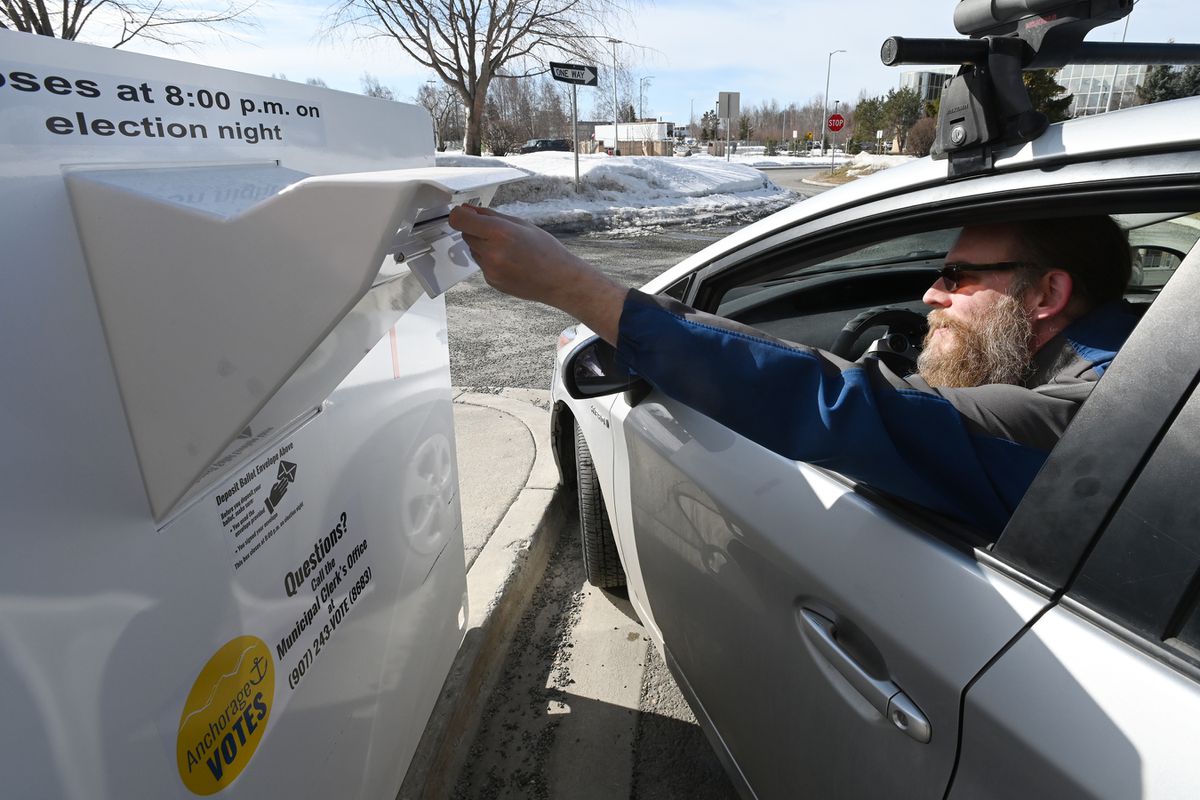 JUNEAU — The first bill to be heard in the Alaska Legislature this year would partially dismantle voting-by-mail systems used by Anchorage, Juneau and other cities across Alaska.

Sen. Mike Shower, R-Wasilla, said Senate Bill 39 is intended to strengthen the security of Alaska’s election system in a nonpartisan way, but several legislative observers began circulating alarmed emails on Friday, with Native Peoples Action asserting that Section 22 of the bill “may ban municipalities from having vote-by-mail elections.”

Nils Andreassen, director of the Alaska Municipal League, said he isn’t yet certain whether vote-by-mail would become impossible under that restriction, but at the least, cities like Anchorage would have to “start over” and rewrite their election laws.

“I think the bigger concern is not that it makes it impossible, but that it takes away decision-making ability at the local level, as to determine what should be possible or not,” he said.

The three Anchorage senators on the State Affairs committee — Sens. Lora Reinbold, R-Eagle River, Mia Costello, R-Anchorage and Roger Holland, R-Anchorage — either declined to comment Friday or said they had not read the bill yet.

Sen. Scott Kawasaki, D-Fairbanks and the committee’s minority member, said he was in the middle of reading it.

“They’re going to say this is an election-reform bill, but this is a voter suppression bill, plain and simple. People are going to be less able to vote, less likely to get a ballot, and it disenfranchises a whole section of folks that were able to benefit this last year,” Kawasaki said.

The bill would take effect in 2022 and would not directly affect this spring’s Anchorage mayor and school board elections.

Shower said his bill is not a voter suppression bill and not partisan.

“That’s not my intent. It isn’t. I don’t want fraud. If this state turns blue because of one person, one vote, and it’s secure, and that’s where it goes? Oh, well, I’ll move to Idaho,” Shower said.

“What I want is, I want (results) correct. And what I don’t want is to have anybody as a citizen questioning whether or not our elections are fair and secure, because that undermines the very essence of a constitutional republic.”

Asked whether there have been any confirmed cases of fraud since Anchorage adopted mail-in voting for municipal elections in 2018, Shower said he isn’t aware of any but intends to ask.

Anchorage Assembly member and mayoral candidate Forrest Dunbar said there have not been any serious allegations of fraud.

Municipal clerk Barbara Jones was not available to answer questions on Friday, but speaking to the Anchorage Assembly on Jan. 14, she said that since 2018, she has investigated and reported to the Assembly each claimed fraud case. The Assembly voted that week to grant the clerk’s office additional powers to investigate fraud and refer charges to law enforcement.

Shower said his bill is the result of several years’ work, and he said he became more motivated this fall when his personal information was exposed in a Division of Elections data breach. After collecting anecdotes on social media, Shower requested that the FBI and Alaska Department of Law open criminal investigations. Both the FBI and the Department of Law said they had received the letter, and Assistant Attorney General Maria Bahr said the law department was looking into it.

Meanwhile, Shower wrote his legislative proposal, then pre-filed it in the Legislature.

Asked about Section 22, Shower said he did hear complaints about voting by mail, but declined to say whether those complaints came from people in Anchorage.

Not limited to municipal changes

The bill includes uncontroversial provisions like the establishment of a voting-problems hotline operated by the Alaska Division of Elections, a requirement to preserve paper ballots after the election and instructions for the state to handle future data breaches like the one that affected him.

In addition to restrictions on municipal voting by mail, the bill would eliminate the state’s own ability to conduct elections by mail, repealing a law currently used for some rural school board elections. Another section would restrict who can turn in a completed ballot on behalf of another voter.

His proposal also includes something supported by Lt. Gov. Kevin Meyer — the repeal of a 2016 voter initiative that automatically registers Alaskans to vote when they apply for the Permanent Fund dividend.

“It’s caused Division of Elections a lot of headaches, because a lot of times, you know, people get their PFD at a different address than where they actually live and vote,” Meyer said on Jan. 5.

“And frankly, it’s been it’s kind of an embarrassment to us and Division of Elections, because you get all these people as registered voters —everybody gets a PFD — and then when they move out of state — and a lot of people have moved out of state the last two, three years — If they don’t tell us that they move, they stay on the voter registration,” Meyer said.

Because it is much more difficult to remove someone from the rolls than to add someone, Alaska now has more registered voters than people eligible to vote, according to figures compiled by Michael McDonald, a professor at the University of Florida.

At Native Peoples Action, executive director Kendra Kloster said repealing automatic registration would remove an easy way for people to get access to the polls.

“We don’t see a bunch of people that are out of state that are voting or anything like that. You’re not fixing anything,” she said.

“We need to be moving in a direction where we make access, make voting more accessible. And this is like doing the opposite.”