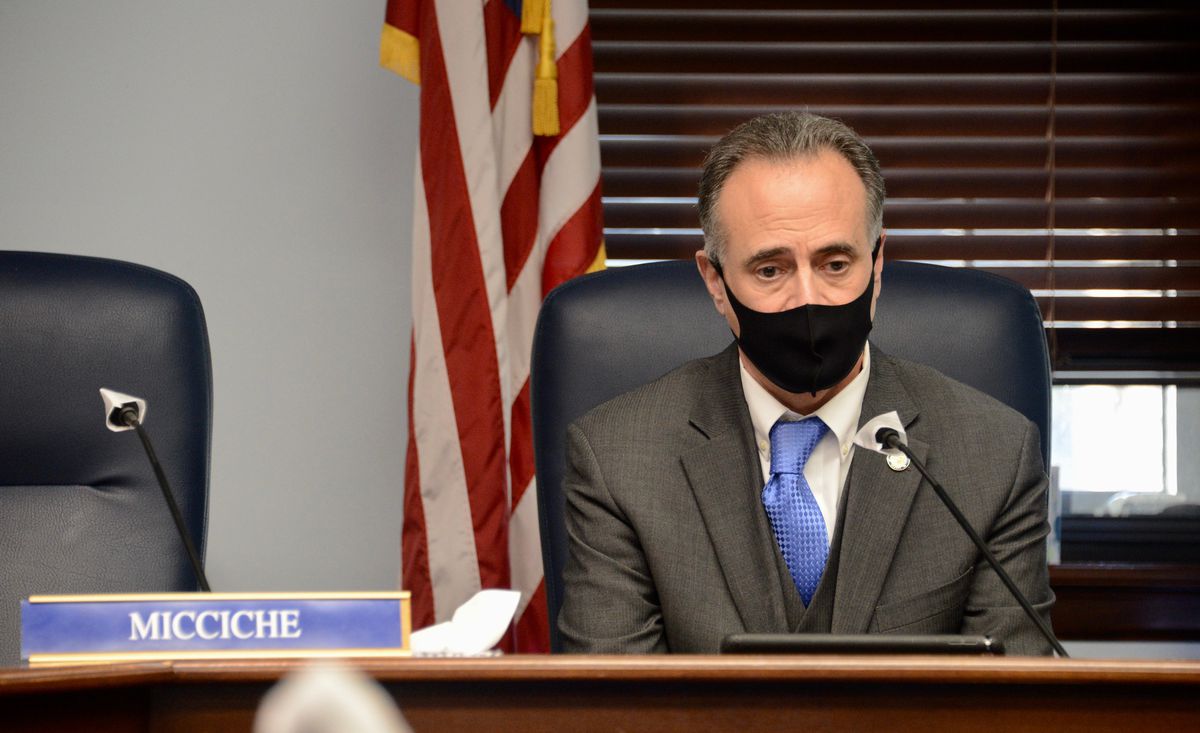 Senate President Peter Micciche, R-Soldotna, during during a news conference on Friday, Feb. 12, 2021 at the Alaska State Capitol in Juneau. (James Brooks / ADN)

Senate President Peter Micciche, R-Soldotna, during during a news conference on Friday, Feb. 12, 2021 at the Alaska State Capitol in Juneau. (James Brooks / ADN)

The Alaska Legislature on Friday failed to extend Alaska’s COVID-19 state of emergency, leaving the state on track to lose millions of dollars in federal aid and powers being used to coordinate the distribution of COVID-19 vaccines and treatment.

“The simple answer is we do not have a functional legislature right now,” said Senate President Peter Micciche, R-Soldotna.

Alaska has been in a COVID-19 emergency since March 2020, but the emergency is set to expire at midnight Sunday morning, and no legislative action is scheduled before then.

Even on Friday, many legislators had left the state Capitol, missing a final opportunity for action. Meanwhile, the head of the state hospital and nursing home association said that the looming emergency declaration expiration would lead to disarray among agencies and organizations involved in the pandemic response, calling it “a mess.”

According to a list of impacts compiled by the state Department of Health and Social Services and public testimony from department officials:

• Food stamp payments will decline as the state loses $8 million per month in federal aid given to states with a disaster declaration.

• COVID-19 screening at airports will become optional, not mandatory, for travelers entering the state.

• The state will be unable to set up emergency COVID-19 treatment centers in places like the Alaska Airlines Center.

• The state will be unable to manage the rationing of vaccines for small towns and boroughs without health powers.

The state House remained unorganized and unable to take action on Friday, one day after Rep. Louise Stutes, R-Kodiak, was named speaker of the House. Stutes said the House lacked a quorum to conduct business.

With the House unable to consider a Senate bill extending the emergency for 30 days, the state Senate shelved plans to approve the bill and instead passed a nonbinding resolution asking Gov. Mike Dunleavy to act unilaterally and issue a new emergency declaration.

A governor-declared and Legislature-extended emergency expired in November, and the governor has issued 30-day declarations of emergency three times since then.

“Please, for God’s sake, let’s tell the governor that we need him to create a new order,” Micciche said.

But Dunleavy has indicated he may not be willing to follow that request.

Earlier this week, he said an extension of the emergency was up to the Legislature and the Legislature’s own attorneys, analyzing an early version of the Senate resolution, said unilateral action by the governor “is likely not permitted by law.”

“In the absence of a declaration, my administration is fully prepared to manage the rollout and distribution of the vaccine to ensure anyone that wants a vaccination will be able to get one. We will also continue to respond to COVID-19 as we begin the process of getting back to normal as soon as possible by focusing on the economy and assisting Alaskans in staying healthy. As we move forward, we will notify Alaska and stakeholders of our plans.”

Jared Kosin, president and CEO of the Alaska State Hospital and Nursing Home Association, said that the potential expiration meant confusion and frustration for many entities in Alaska.

Kosin noted that an Alaska facility said, after consulting with its legal team, that it would have to shut down its COVID-19 testing site on Monday if the declaration lapsed Sunday.

“They don’t feel like they can reasonably operate without basically being in violation of requirements,” Kosin said. “And they’re going to try and restructure the deal so that the testing site can continue, but it’s completely thrown into the air.”

The ability for someone in Alaska to bypass travel and instead receive telehealth care from a cancer doctor or specialist in the Lower 48 under the arrangement would disappear, Kosin said.

That could potentially have a big effect on people who receive complex care. They might have their care disrupted or end up being forced to travel for care, he said.

There are still a lot of unknowns as expiration looms.

James Brooks reported from Juneau and Morgan Krakow from Anchorage.