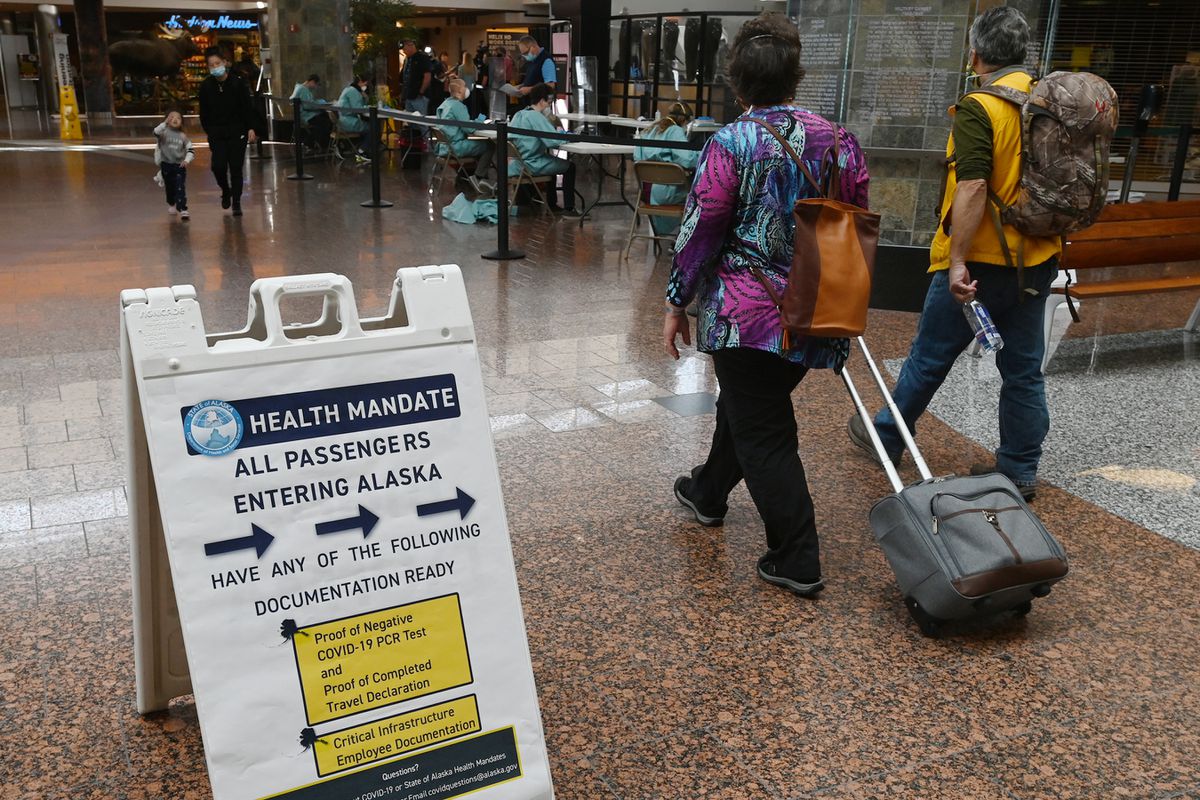 Alaska’s top public health officials and hospital representatives urged legislators to extend the state’s COVID-19 emergency declaration Thursday as the clock ticks toward the mid-February date when it expires.

The declaration provides authority for everything from mandated airport COVID-19 traveler testing and increased hospital capacity to National Guard deployments for vaccine distribution.

But now that bill, Senate Bill 56, is stalled in committee and faces some resistance in the Legislature, where it’s increasingly possible that lawmakers may not be willing — or possibly able, given the tight timeline — to approve a declaration that some Alaskans see as part of a larger crackdown on individual freedoms.

As of now, 54 of the 55 states and territories have active public health emergency declarations, according to the National Governors Association. Michigan is the exception.

In Alaska, some critics in the Legislature and the public have incorrectly linked the statewide emergency to locally imposed school closures and actions like the monthlong hunker down in Anchorage in December.

“The sooner the state is not in an emergency, the sooner Anchorage will be out of its state of emergency,” Amber Glasser, an Anchorage restaurant employee furloughed by the pandemic, testified by phone Thursday.

But the declaration has nothing to do with either local restrictions or mask mandates, which the state doesn’t enforce.

Rather, it provides legal backing for the state’s coronavirus health orders, which include traveler restrictions and seafood industry protocols. It also gives what health care representatives and local officials say are crucial flexibilities to hospitals and other medical facilities to respond to the virus and deliver vaccine to Alaskans.

Sen. David Wilson, R-Wasilla and chairman of the Senate Health and Social Services Committee, said that if a member of the committee verbally objects to advancing the bill, it needs the support of three of the committee’s five members to advance anyway.

Sen. Tom Begich, D-Anchorage, said he supports an extension, and Wilson himself said he wants to see the bill receive a vote on the Senate floor.

Reinbold’s firm “no” stance leaves the bill in the hands of Sens. Mia Costello, R-Anchorage, and Shelley Hughes, R-Palmer. Both have expressed concerns about the bill’s original language, which extends the emergency through Sept. 30. Costello said she does not support an extension through that date.

The committee could amend the bill as early as Tuesday to change the length of the extension or make other modifications, but that leaves only a few days for it to advance through two other committees, through a vote of the Senate and through the House — which has not organized and cannot even consider legislation.

Wilson declined to say whether he thinks an extension can even pass in the time remaining.

Without the declaration, Alaska’s mandatory airport testing would become voluntary, a prospect officials with the state Department of Health and Social Services called “very concerning” during testimony on Thursday. State contractors screened nearly half a million people at airports so far and identified 2,355 cases that way.

“This was instrumental in keeping Alaskans’ positive cases counts low and below most of the country,” said Heidi Hedberg, director of the state’s public health division.

“DHSS would not have been able to accomplish all that we have done without a public health emergency,” she said.

Among the 50 states, Alaska has the third-lowest COVID-19 death rate, behind only Hawaii and Vermont, according to data from the Centers for Disease Control and Prevention.

Emergency procurement contracts, followed by competitive regular contracts, “is what separates us from the other states. We acted quickly to contain the transmission of COVID,” she said. ”The successes of this response are a direct result of the authorities within that disaster declaration,” she said.

The declaration also provides a centralized framework for vaccine administration, Hedberg said. “Communities that do not have local health powers will be left behind.”

Losing the declaration could threaten the state’s ability to do everything from use the National Guard to help deliver vaccine to alleviate medical staffing shortages with nurse practitioners, according to Jared Kosin, president and CEO of the Alaska State Hospital and Nursing Home Association.

Other activities at risk without the declaration include Alaska Native Medical Center’s addition of 27 beds for overflow patients; another Anchorage hospital’s standalone COVID-19 unit; and the use of the Alaska Airlines Center for vaccination clinics and infusion treatment therapy, Kosin said in an interview Thursday.

“If the concern is ‘We’re sick of COVID … We want it to be over,’ you’re actually slowing everything down by doing this,” he said. “This is not about mandates. This is about access to resources and flexibility. And that is what I think (is) missing in this debate.”

The declaration facilitates 125 federal waivers, including at least 20 that appear to hinge on the existence of an active declaration, though that legal question has proved impossible to answer, he said. The language in question reads: “This waiver may be implemented as long as it is not inconsistent with a state’s emergency preparedness or pandemic plan.”

The hospital association and counterparts in other states interpret that language to mean an active declaration is required, Kosin said: How can there be a plan without an emergency?

Alaska passed an emergency declaration when the coronavirus pandemic reached the state in March. Dunleavy signed 30-day extensions starting in November but the administration now says only the Legislature has the authority to extend the current order.

In late November, surging case counts led to concerns that a crush of patients would overwhelm the state’s health care capacity. By early December, when COVID-19 hospitalizations peaked, there were just five ICU beds open between Anchorage and Mat-Su.

Since then, new case levels and hospitalizations have dropped and vaccine became available here in December. Alaska now is one of the top states in the country for the amount of vaccinations distributed per capita.

Outbreaks are still occurring, however: Five Mat-Su schools closed for in-person learning this week due to clusters of new cases. High case rates continue in Western Alaska. Cases were reported in nearly half the 705 employees at Trident Seafoods’ Akutan processing plant.

“We are excited to see the recent downturn in cases but the battle is far from over,” Dr. Steve Compton, president of the Alaska Heart Institute in Anchorage, wrote in a letter to the committee. “This morning I admitted another Covid patient with life-threatening cardiac manifestations. It alarms me that most of our vulnerable patient population remain unvaccinated.”