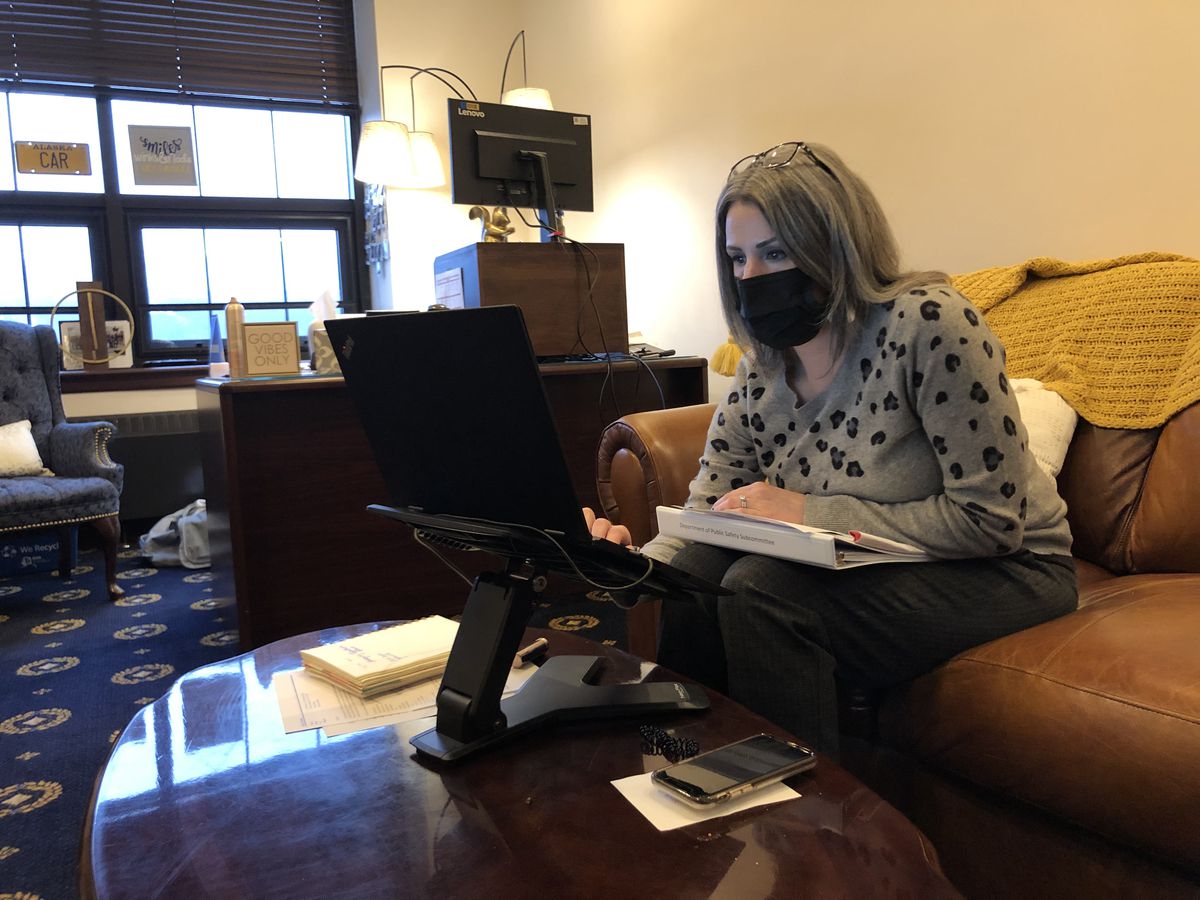 Rep. Kelly Merrick, R-Eagle River, works on Tuesday, March 2, 2021 at her office in the Alaska Capitol at Juneau. Merrick has been sharply criticized by Republicans for voting in favor of Speaker of the House Louise Stutes, R-Kodiak. (James Brooks / ADN)

Rep. Kelly Merrick, R-Eagle River, works on Tuesday, March 2, 2021 at her office in the Alaska Capitol at Juneau. Merrick has been sharply criticized by Republicans for voting in favor of Speaker of the House Louise Stutes, R-Kodiak. (James Brooks / ADN)

At a raucous weekend town hall meeting, prominent Eagle River Republicans called for the resignation of Republican Rep. Kelly Merrick and vowed to recall her from office if she does not resign. They’ve already censured Merrick and voted Wednesday night to start a recall campaign.

Three weeks ago, Merrick provided the tiebreaking vote needed to end a deadlock in the state House of Representatives when she picked Rep. Louise Stutes, R-Kodiak, as speaker.

“There are members that have unyielding positions, and when you’re in a deadlock, somebody has to be willing to compromise,” Merrick said.

That’s particularly critical because Republicans control the state Senate and the governor’s office. Republican control of the House would give the party the ability to enact legislation almost at will.

“She gave the Democrats the power to run the House, and the state’s not going to get (anything) done for the next two years,” said former Lt. Gov. Craig Campbell, a Republican Party official in Merrick’s district. “There’s no excuse. She’s no hero out of this.”

Campbell and other Republican leaders in Merrick’s district say they feel betrayed because Merrick promised she would not join a coalition. Merrick disputes that account.

“I believe what I said was that I would not be in a Democrat-led coalition, and that’s why I voted for a Republican Speaker,” she said.

Merrick said she has received support for her vote from people both within the district and outside of it, and Republicans who say she has abandoned her party are mistaken.

“There’s going to be many votes where I’m siding with the minority in committee and probably on the floor. I have not abandoned conservative values for a seat as a co-chair (of the House Finance Committee). In fact, I am ensuring conservative values will be protected,” she said.

Soon after the vote, Republican Party officials in Merrick’s district approved a resolution of censure. Under state party rules, that resolution is “an official rebuke and disapproval.”

In other districts, party officials have dropped all support for censured officials and campaigned against them in the following election.

Participating in the weekend town hall by Zoom, Merrick was loudly booed as she told town hall attendees she “proudly voted” for Stutes.

“Representative Merrick, I would like to ask you resign ... and if you refuse to resign, we will recall you,” said Michael Tavoliero at the town hall meeting.

Tavoliero, a volunteer official for the Republican Party in Merrick’s district, got a round of applause from attendees and passed around a preliminary recall petition to those attending in person. On the Zoom call, technical issues kept Merrick from hearing Tavoliero’s comment or those of many others attending the meeting in person, so she sat silent as constituents asked questions about her vote. Others joined Tavoliero in asking for her resignation.

“I thought it was quite a train wreck,” said Joe Wright, chairman of the Republican Party in Merrick’s district, about the town hall.

“She’s ... got a lot of people with a lot of questions, and we’re just not getting the answers,” he said.

State law doesn’t allow a formal recall petition until at least mid-May, but Wright said on Wednesday that district officials voted to form a recall committee and get the process started. Merrick attended the meeting remotely, he said.

Campbell said he believes the reaction at the town hall is an accurate representation of sentiment in Eagle River.

“That is exactly what the district feels right now. I mean, they brought a recall petition there. And it probably had 50 signatures by the end of the day,” he said.

In an interview, Merrick disagreed, saying she believes those who attended the town hall meeting in-person aren’t representative of Eagle River.

About 42 people were present in-person, said Rep. Ken McCarty, R-Eagle River and the event’s organizer. Some of those attendees live outside the Eagle River area.

Merrick said another 30 or so people were on the Zoom call, and others didn’t attend because of the ongoing COVID-19 pandemic.

“I think there is a loud, vocal minority, and they do not represent the majority of Republicans in Eagle River,” she said.