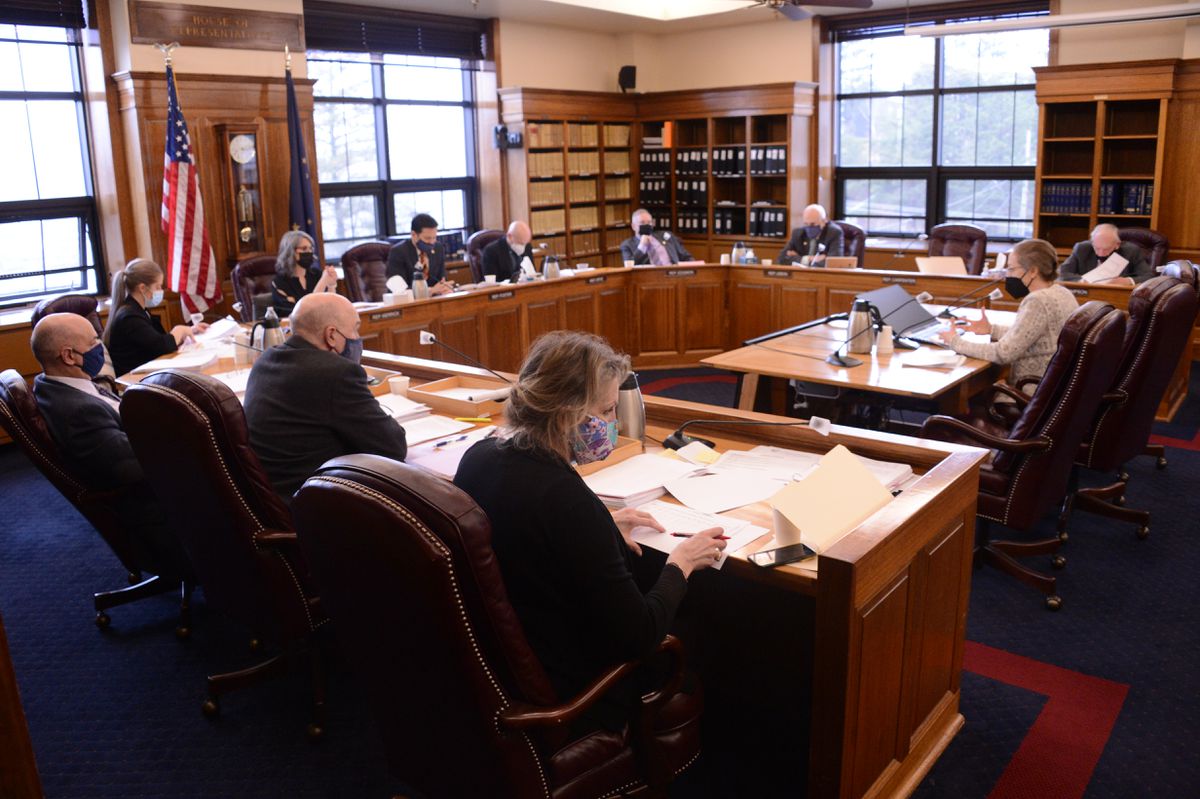 The Alaska House Finance Committee meets on Tuesday, April 6, 2021 at the state Capitol in Juneau. Over the next two weeks, the committee is scheduled to consider the state operating budget. (James Brooks / ADN)

The Alaska House Finance Committee meets on Tuesday, April 6, 2021 at the state Capitol in Juneau. Over the next two weeks, the committee is scheduled to consider the state operating budget. (James Brooks / ADN)

JUNEAU — At the start of Alaska’s current legislative session, lawmakers were worried about how to pay for the state budget and the Permanent Fund dividend.

After an unexpectedly rosy revenue forecast and with more than $1 billion in federal aid on the way, they’re now concerned about how to handle the unexpected money before the legislative session expires May 19.

The federal government isn’t scheduled to publish rules for how the aid can be used until early May, which leaves the situation uncertain.

“We’ve got a substantial amount of federal money coming our way. And it has created issues because we want to be able to marry that into our budget, but we’ve got this time problem,” said Rep. Neal Foster, D-Nome and chairman of the House Finance Committee.

“The clock is ticking, and meanwhile, we got to get our budget manufactured with or without that knowledge,” said Rep. Bart LeBon, R-Fairbanks and a minority member of the finance committee.

Last year, lawmakers left coronavirus aid decisions in the hands of Gov. Mike Dunleavy, and many legislators were unhappy with that process. If they don’t act during the legislative session, the governor could call the shots again.

“I think that we’re the appropriating body. So we should do everything we can to make sure that we exercise the power that we have,” said Rep. Sara Rasmussen, R-Anchorage.

Some leading lawmakers are discussing whether to use the federal aid to fund some programs in place of taxes and the earnings of the Alaska Permanent Fund. That technique, nicknamed the “backfill,” could free hundreds of millions of dollars for this year’s Permanent Fund dividend.

But until the federal rules are published, lawmakers don’t know whether that approach is legal.

In Wyoming, which has also suffered from revenue shortfalls during the pandemic, legislators relied on the advice of a consultant to tentatively allocate millions in federal aid to programs that had been previously targeted for budget-balancing cuts.

The economies of Utah and South Dakota didn’t suffer as much during the pandemic, and lawmakers there didn’t have to fill large budget caps. Instead, they’ve put federal aid toward infrastructure projects and education, things likely to fall within the federal rules. Montana is planning a similar investment into infrastructure.

Alaska’s budget year starts July 1, and the Department of Revenue is forecasting that it will receive enough money from taxes and the Alaska Permanent Fund’s investments to cover budgeted state services. If services are the priority, there’s not enough to pay for a substantial Permanent Fund dividend.

To provide a dividend, Gov. Dunleavy has proposed spending additional money from the Alaska Permanent Fund, breaking a spending limit approved by lawmakers in 2018.

The leaders of the House and Senate finance committees — Foster and three Republicans — say they’re uninterested in that idea.

“I think it’s important that we stick to the POMV,” said House Finance co-chair Kelly Merrick, R-Eagle River, referring to the technical term for the limit.

“It’s been very clear from Department of Revenue and the Permanent Fund corporation that overdraws are unsustainable and will affect the future of the fund,” she said.

Merrick, Foster and others said they intend to set the amount of the dividend in a separate bill later this session, after the House approves the state budget.

The House Finance Committee is scheduled to work on the budget (excluding the dividend) for the next two weeks. Lawmakers on the committee will hear public testimony later this week and consider further changes next week.

Right now, the House version of the budget isn’t much different from what Dunleavy proposed earlier this year.

The full House is tentatively scheduled to vote on the budget during the week of April 19, and after that, it would advance to the Senate.

Though the Senate would have control of the budget when the federal rules arrive in May, Senate Finance Committee co-chair Bert Stedman, R-Sitka, said he expects to work on any backfill-related modifications with the House Finance committee leaders.

Foster said he worries about the possibility of “gamesmanship” between the predominantly Democratic House majority and the predominantly Republican Senate majority, but the top four lawmakers on the finance committees are already scheduling meetings to find common ground.

“Hopefully, we’ve got a good relationship with the Senate to where we’re working with them,” Foster said.

If lawmakers don’t pursue the backfill, they could send money to infrastructure projects across the state, creating construction jobs.

For all the promise that the federal aid brings, Rasmussen said there’s a downside. At the start of the session, many lawmakers believed that budget urgency would force the Legislature and governor to agree upon a long-term formula for the Permanent Fund dividend. With federal aid, that urgency has gone away.

“It’s a little bit concerning, I guess, how the conversation has changed, because it feels like we just got a hall pass basically, for another year,” Rasmussen said.

“I’m hopeful that by the end of the session, we’ll have something figured out. I don’t know if it’ll be this year,” she said.