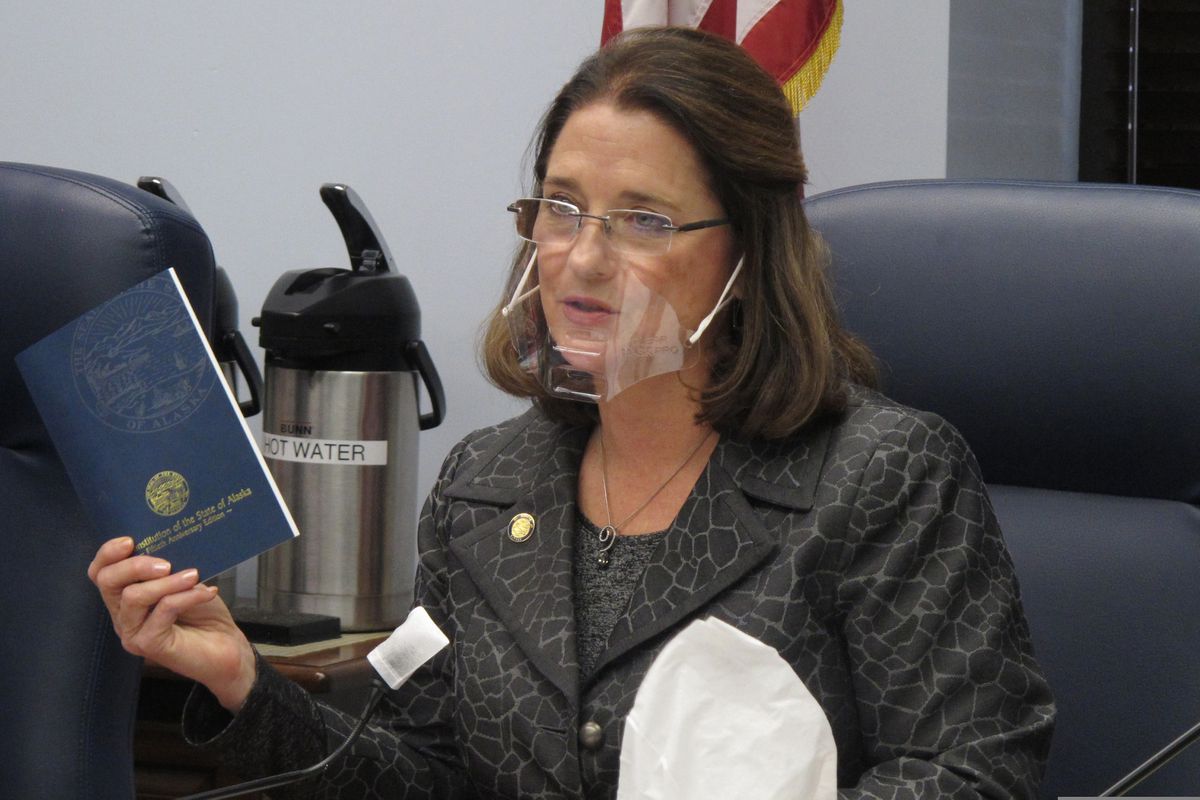 In this Jan. 27 file photo, Alaska state Sen. Lora Reinbold, an Eagle River Republican, holds a copy of the Alaska Constitution during a committee hearing in Juneau. (AP Photo/Becky Bohrer)

In this Jan. 27 file photo, Alaska state Sen. Lora Reinbold, an Eagle River Republican, holds a copy of the Alaska Constitution during a committee hearing in Juneau. (AP Photo/Becky Bohrer)

“We have notified Senator Lora Reinbold that she is not permitted to fly with us for her continued refusal to comply with employee instruction regarding the current mask policy,” spokesman Tim Thompson said by email.

“This suspension is effective immediately, pending further review. Federal law requires all guests to wear a mask over their nose and mouth at all times during travel, including throughout the flight, during boarding and deplaning, and while traveling through an airport,” he said.

The ban had cast uncertainty on how Reinbold might have rejoined the Alaska Senate when legislative work resumed Monday. No other airline has regularly scheduled direct flights between Anchorage and Juneau.

But Reinbold embraced an alternate travel solution: Over the weekend, she drove more than 700 miles from her home in Eagle River through a swath of Alaska and part of the Yukon to the Southeast town of Haines, where she caught a five-hour ferry ride to Juneau.

She was on the Senate floor at the state Capitol on Monday morning.

Alaska I went to new heights to serve you & have a new appreciation for the marine ferry system. I am keenly aware of...

In a Sunday Facebook post, she wrote, “I have a new appreciation for the marine ferry system (and) am keenly aware of a monopoly in air transport to Juneau that needs reviewed!”

Thompson, with Alaska Airlines, said the length of Reinbold’s ban will be determined after a review. Alaska Airlines had banned 506 people as of Friday.

Reinbold said in a message to a Daily News reporter Saturday — after telling an anti-mask group she was en route to Juneau by car — that she had not been notified of a ban.

In the state Capitol on Monday, she said she had received a message either Friday or Saturday from the airline.

Thompson said he was not able to provide a copy of the notice sent to Reinbold, “but the notice was received.”

“I hope to be on an Alaska Airlines flight in the near future,” Reinbold said earlier Saturday.

Ak Air: Until there is a fair determination, after thorough review of both sides, I believe this should be...

Reinbold has been vocal in her objections to COVID-19 mitigation measures in the Alaska Capitol and in public and has repeatedly objected to Alaska Airlines’ mask policy, which was enacted in 2020 before the federal government began requiring masks aboard aircraft and public transportation earlier this year.

Last year, she referred to airline staff as “mask bullies” and the airline itself as “part of mask tyranny” after being asked by Alaska Airlines flight attendants to wear a mask aboard a flight. After the incident, she sent a cake to some airline flight attendants. The cake bore an inscription saying, “I’m sorry if I offended you.”

The airline’s ban comes after an incident this week at Juneau International Airport in which Reinbold was recorded apparently arguing with airport and Alaska Airlines staff about the mask policies.

A video posted to social media by the Alaska Landmine website appears to show part of the incident. A Juneau Police Department officer responded to the scene.

“JPD has an officer staffed at the airport full time, so we would be present or in the area of any issues there, but we didn’t take any enforcement action,” said Lt. Krag Campbell, a spokesman for the department.

The airport’s manager said surveillance video of the incident would be released only by court order.

Reinbold addressed the situation in a text message.

“I was reasonable with all Alaska Airlines employees,” she said. “I have been flying on Alaska Air for decades and am an MVP Gold (frequent flyer). I inquired about mask exemption with uptight employees at the counter.”

She said the timing of the complaint “and a specific employee” is of keen interest.

“I have been assured this (will) be looked into,” she said.

Reinbold was able to board a flight to Anchorage and said it was a “pleasant, safe flight with happy flight attendants and great, talented pilots.”