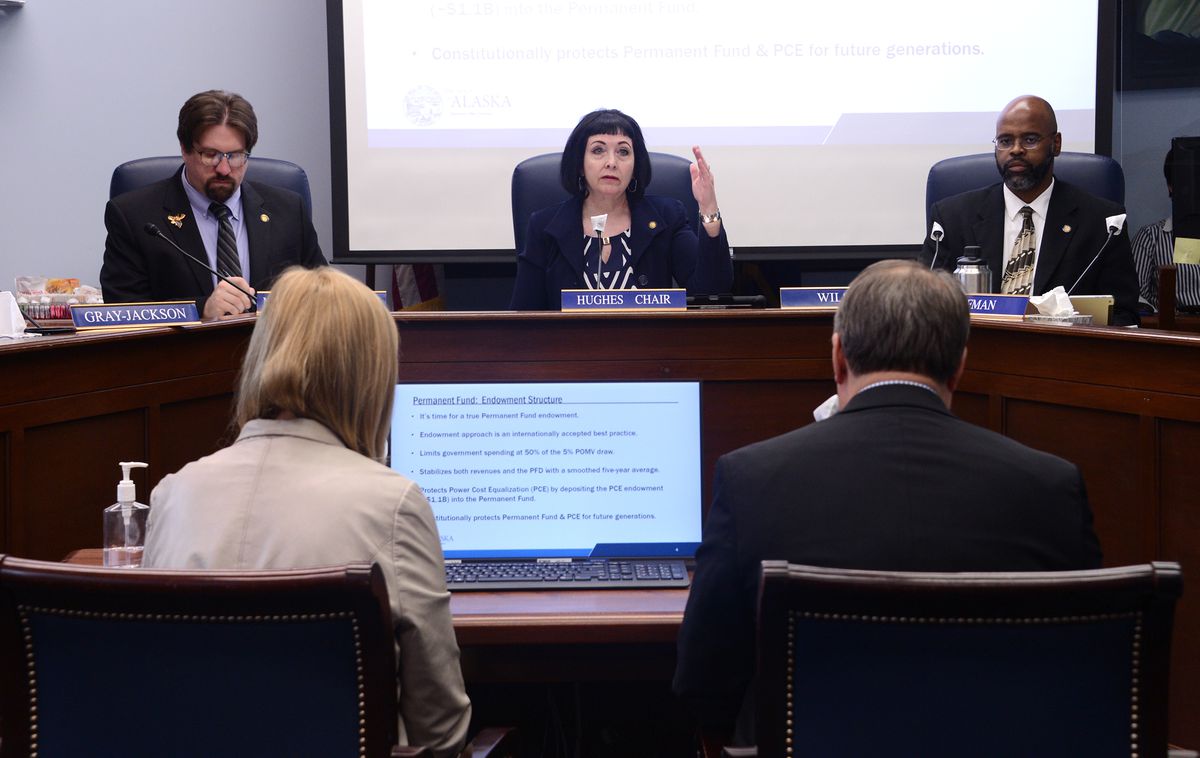 Sen. Shelley Hughes, R-Palmer, presides over a hearing of the Senate Community and Regional Affairs committee on Thursday, May 27, 2021 at the Alaska State Capitol in Juneau. The committee was hearing discussion of Gov. Mike Dunleavy's plan to change the formula for the Permanent Fund dividend. (James Brooks / ADN)

Sen. Shelley Hughes, R-Palmer, presides over a hearing of the Senate Community and Regional Affairs committee on Thursday, May 27, 2021 at the Alaska State Capitol in Juneau. The committee was hearing discussion of Gov. Mike Dunleavy's plan to change the formula for the Permanent Fund dividend. (James Brooks / ADN)

JUNEAU — Gov. Mike Dunleavy’s plan to constitutionally guarantee a Permanent Fund dividend is dead in the Alaska Legislature for the time being.

The plan would conclusively end annual debates over the amount of the dividend by permanently limiting the amount of money that can be spent from the Permanent Fund. A once-per-year transfer from the fund to the state treasury would be split 50-50, half for dividends and half for services.

Leading lawmakers, including prominent Republicans, say the governor’s proposal has merit, but because it creates large deficits for at least a few years, it needs to be accompanied by new taxes. That would require a major shift in policy by Dunleavy: Since his election in 2018, the governor has insisted on no new taxes without a statewide vote.

“Is he willing to put forward a sales tax? You know, is he willing to really stick his neck out and take some leadership to help get this through?” she said.

“The governor’s position is that we need to do (the 50-50) first, but I think to do this without the rest of the fiscal plan is not a real solution,” said Rep. Ivy Spohnholz, D-Anchorage.

As is, the Permanent Fund proposal lacks the 14 Senate votes and 27 House votes needed to advance from the Legislature and on to a statewide vote in 2022, said Senate President Peter Micciche, R-Soldotna.

In social media messages and in a Thursday legislative hearing, the governor’s administration said the new Permanent Fund plan could stand on its own for several years. Lawmakers call the governor’s projections overly optimistic. Those forecasts presume the value of the Permanent Fund grows steadily, assume budget cuts greater than any approved in the past few years, and require the Legislature to temporarily overspend from the Permanent Fund.

“If this avoids a new broad-based tax, which is a revenue measure — I’m just a little lost at that,” said Sen. David Wilson, R-Wasilla. “I prefer to have ... a comprehensive plan before us now instead of waiting to the future for us to have something that may or may not be tangible.”

Revenue Commissioner Lucinda Mahoney acknowledged the criticism and said that “the Department of Revenue is currently working on two to three new revenue measures that we plan to roll out in the August timeframe,” but the department declined to provide details, and legislators said they don’t know what’s being planned.

Dunleavy has asked legislators to discuss the Permanent Fund plan during a special session in August, but that session will fall flat without additional action, legislators said.

If nothing changes, Alaska’s perennial struggle over the Permanent Fund will continue, keeping lawmakers focused on the budget and away from things like improving Alaska’s lowest-in-the-nation student reading scores and its highest-in-the-nation sex crime rate.

“I don’t hold out hope that if we continue to kick the can on the PFD that we would all of a sudden refocus and start taking taking care of these other big areas,” Hughes said.

Even without taxes, the existence of the new dividend plan represents a “titanic shift” in the way the Legislature thinks, said Sen. Mike Shower, R-Wasilla.

From 1982 through 2015, the Permanent Fund dividend was paid annually under a reliable formula in state law. In 2016, after plunging oil prices slashed state revenue, then-Gov. Bill Walker vetoed half the dividend to save money. Walker’s decision was upheld by the Alaska Supreme Court, and in every year since that first veto, the Alaska Legislature has ignored the traditional formula and set the dividend by fiat.

Negotiations over the amount have been tumultuous every year since and have threatened to shut down the state as supporters of the traditional formula clash with lawmakers who prefer a smaller amount that fits within a balanced budget.

But on May 12 this year, many of the lawmakers who have supported the traditional formula literally stood behind Dunleavy as he announced the 50-50 plan. On the opposite side of the debate, lawmakers who opposed a constitutionally guaranteed dividend have softened their positions or were voted out of office last fall.

After its introduction, the governor’s proposal appeared to have some momentum, but that evaporated in the final week of the Legislature’s regular session. The governor was spotted bear hunting on the Alaska Peninsula instead of lobbying legislators for support, and that attitude needs to change if he is serious about a long-term fix, said Shower and Hughes.

Shower said that If he could give the governor advice, “I would tell the governor that he would need to either introduce tax measures, or make it clear that he’s going to support them and help us get those passed.”

Shower is one of the most fiscally conservative members of the Alaska Legislature, and he doesn’t take the idea of new taxes lightly. He has supported the traditional dividend formula, but he is willing to go with the 50-50 plan because it’s an improvement over recent dividend amounts.

He considers any reduction from the traditional dividend formula to be a regressive tax that takes the same amount from every Alaskan, whether they earn $10,000 per year or $100,000 per year. Whether the Legislature imposes a sales tax or cuts the dividend, the outcome is the same, he said. The only difference is who hurts the most.

“The reality is, either way, we’re going to be coming after your wallet,” he said.

Sen. Natasha von Imhof, R-Anchorage, disagrees. “Some lawmakers do not support paying a dividend that requires any taxes at this point. That’s what I think,” she said.

She isn’t opposed to a constitutional dividend and has come up with a plan of her own, but she says it doesn’t make sense to tax Alaskans in order to pay them a dividend.

Since 2015, state lawmakers have preferred to cut spending rather than impose taxes, but there is now a broad reckoning that there are few places left to substantially cut the operating budget, and those that remain are politically unfeasible. Other than the dividend, the state’s biggest expenses are K-12 education and health care.

In the first year of Gov. Bill Walker’s term, the state’s pre-Permanent Fund operating budget was almost $5.4 billion, not counting federal money or fees. It dropped by almost $1 billion in the next year, but since then, it has changed very little.

When Dunleavy attempted to cut the budget through massive budget vetoes, it sparked a recall campaign against him. The governor later walked back most of his vetoes, and the operating budget is now roughly where it was in Walker’s second year.

This year was supposed to be the moment of crisis. For most of the past decade, the state has spent from savings to boost the value of the dividend, stave off budget cuts and avoid taxes. In 2014, Alaska had nearly $18 billion in savings outside the Permanent Fund. By April this year, almost all of that had been spent.

A better-than-expected revenue forecast and the arrival of almost $1 billion in federal economic aid has improved the situation temporarily, but it doesn’t change the bottom line: The state collects enough money from taxes and the Permanent Fund’s investment earnings to cover both the operating budget and the capital budget (which funds construction and renovation projects statewide), but not enough to pay for those and a large dividend without spending more than the fund earns in an average year.

Revenue Commissioner Mahoney said on Thursday that situation is temporary.

The global economy is still recovering from the COVID-19 pandemic, and the Department of Revenue believes oil prices will rise over the next few years. With that recovery in progress and the growing value of the Alaska Permanent Fund — which reached $80 billion on Thursday — the Department of Revenue expects the state will earn more money each year through the end of the decade.

In six years, according to a budget forecast presented by Mahoney, the state will be earning enough to pay for a 50-50 dividend and both budgets without new taxes.

Lawmakers have pointed out different problems with that scenario. First, it would require lawmakers to make about $500 million in cuts, much more than they’ve been able to achieve so far.

Here’s a blast email the Governor is using to lie about his 50/50 plan.

It would create, not eliminate, massive deficits, forcing the state back into Donna Arduin-style cuts in operations. #akleg pic.twitter.com/BiyBtk0xuC

“If you think it’s a good idea to eliminate Pioneer Homes, the Marine Highway, and de-fund public safety, then this is a great plan,” said Rep. Zack Fields, D-Anchorage, on social media.

Second, it presumes steady gains for both the Permanent Fund and oil prices, with no abrupt downturns or upswings. Third, inflation is presumed to stay at a relatively low level.

Fourth, it asks lawmakers to temporarily break an existing Permanent Fund spending cap to cover immediate needs while revenue rises. That’s something adamantly opposed by the coalition majority in control of the House of Representatives.

One of that majority’s founding principles is to stay within a 2018 law that caps transfers from the Permanent Fund. Many legislators and the governor believe they can break that cap without penalty, but doing so would reduce the amount of money that can be invested, thus reducing the amount available to the state in the future.

Permanent Fund earnings now represent two-thirds of the state’s regular revenue, more than twice the importance of oil and other taxes.

“Our caucus position is that we’re not going to overdraw,” Spohnholz said.

The Legislature’s own budgeters, using a more pessimistic model with different assumptions, estimated that the governor’s plan would run the state out of available money within two years and create a deficit of more than $1 billion by the state ran out of savings.

‘It’s time we address this’

Hughes said she believes the truth could lie between the two models, but she thinks it’s important to know that there is a penalty for inaction, just as there is for making a wrong choice on future budgets.

In Thursday’s hearing, University of Alaska economist Mouhcine Guettabi told lawmakers that he believes the state is losing out on hundreds of millions of dollars’ worth of potential investments because businesses are reluctant to spend money as long as there is uncertainty.

The inability to conclusively decide the dividend has pushed the state to the brink of shutdown several times as lawmakers struggle to set the amount each year. Budget negotiations consume time, effort and attention.

Hughes and Senate Minority Leader Tom Begich, D-Anchorage, have been working on legislation intended to improve students’ reading ability, but that has been sidelined by the need to pay more attention to the budget, she said. The same is true for her efforts to reduce Alaska’s rate of sexual assault.

“It’s time we address this, I believe, so we can get into some other important matters,” she said.