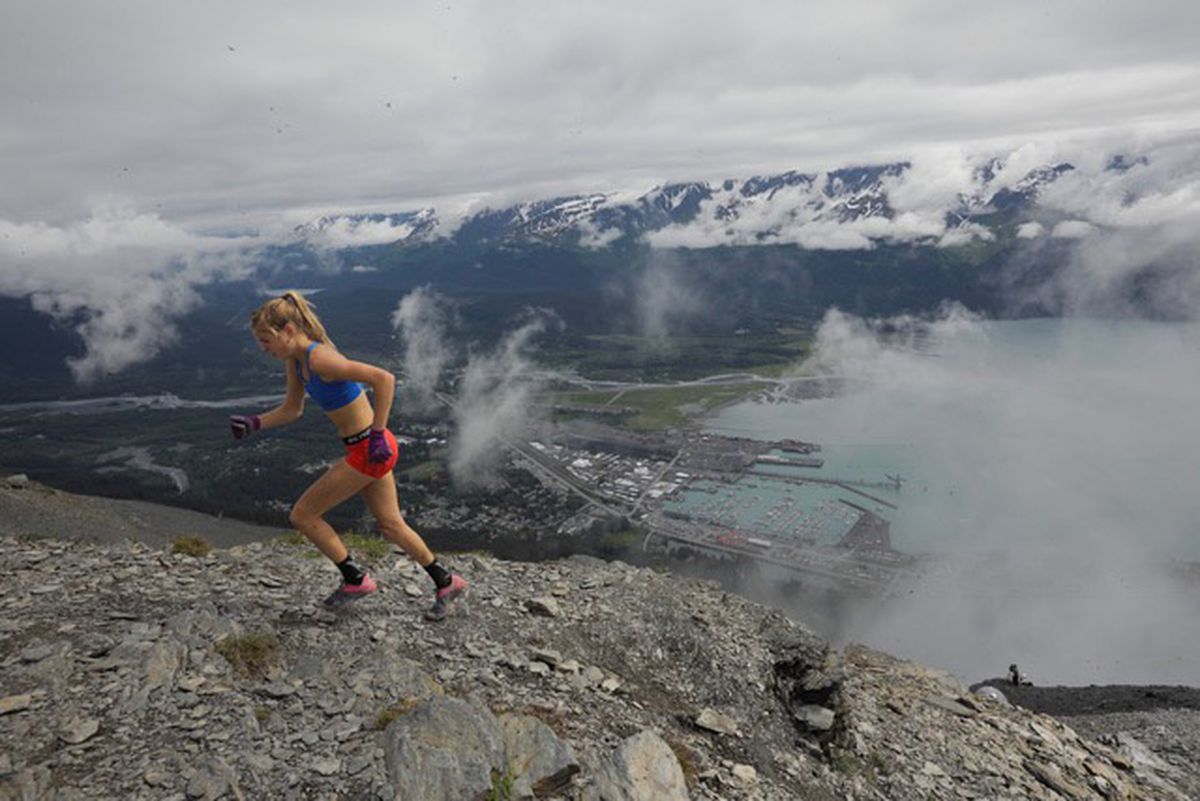 SEWARD — In the past two years, Alaska running star Allie Ostrander has built a racing resume that she could retire on: second at the NCAA championships for cross-country, eighth in the 5,000 at U.S. Olympic trials, and a collegiate national title in the 3,000-meter steeplechase.

You'd think that by now she'd have won the Fourth of July race not far from her hometown of Soldotna. But that 3-mile event is Mount Marathon, the leg-busting race in Seward with a 3,000-foot climb and descent that's attracted international competition for the past few years.

On Tuesday, the 20-year-old Ostrander crossed the race off her list on her second try, leaving behind a field that included former Olympic cross-country skier Morgan Arritola and two-time Mount Marathon champion Christy Marvin.

"It's special in a really different way," Ostrander said at the finish, covered in mud from several falls on her way down the mountain. "I have a lot of history with this race and my family does it — it's a tradition. I was happy to be able to get a win."

Ostrander's time of 49:19 knocked more than a minute from her personal best and was the second-fastest in race history. Emilie Forsberg was 90 seconds faster in 2015 when the Swedish mountain runner came to Seward with her boyfriend, Kilian Jornet. Both of them smashed decades-old records.

On paper, Ostrander was the favorite Tuesday: She's a six-time junior race winner who in her 2015 women's debut finished minutes ahead of everyone but Forsberg. She skipped last year's Mount Marathon to race the U.S. Olympic Trials in Oregon.

But both Arritola, 31, and Marvin, 37, were credible challengers. Arritola, who lives in Boise, Idaho, cross-country skied at the 2010 Olympics before switching sports and winning three U.S. Mountain Running championships.

Marvin, who lives in Palmer with her husband and three boys, has been one of Alaska's top mountain runners for years, winning last year's Mount Marathon in 51:02 — within striking distance of Ostrander's 2015 time of 50:28.

But Tuesday's race quickly became a duel between Ostrander and Arritola who pulled away from the rest of the field by the time the women made it halfway up the mountain. Marvin said she just had a bad day, telling one friend at the finish that she felt "terrible" Tuesday.

"It was not a very fun one this time," said Marvin, who finished in 52:22 and called the race "a sufferfest from start to finish."

Arritola, in her first Mount Marathon, made it a race, hanging with Ostrander all the way to the summit.

She'd taken one trip up the mountain ahead of time and solicited tips by email from former Mount Marathon champion and cross-country ski teammate Kikkan Randall.

But Arritola said she still felt a little like a rookie, straying from her preferred route on the first climbing section, then hiking "a little too far" past the turnaround point and losing contact with Ostrander. On the descent, "there were a few spots where I was like, 'Which way do I go again?' " Arritola said.

"I just need to practice more," she added. Arritola finished in 51:09, a little less than 2 minutes behind Ostrander.

The race was no cakewalk for Ostrander, however. She said she was "so devastated" that she had to keep hiking past the post marking the top of the junior course, halfway up the mountain, instead of turning around there.

She said she thought Arritola would be able to catch her on the downhill. And on the way down, Ostrander said, she caught her toe in shale four times and "penguin-slid."

"I wasn't really thinking — I was just trying to keep going," she said.

Ostrander ultimately had the Fourth Avenue homestretch to herself, though she didn't let up until crossing the finish. The feeling, she said, was maybe a little less special than her national championship in the steeplechase, but "still amazing in just a different way."

Some athletes with higher aspirations might have skipped the race and the risk it poses; defending men's champion David Norris sat out to focus on qualifying for the 2018 Winter Olympics in cross-country skiing.

But Ostrander said she "barely" gave that option any thought.

The win will fill a void in Ostrander's trophy case, though it still leaves her something to shoot for next time: Forsberg's record of 47:48, which Ostrander said makes her victory in 49:19 "look like child's play."

Ostrander said her return to the race after Tuesday will depend on what else is happening. But she noted that her new status as a winner allows her to take a year off, if needed, and return to Mount Marathon without having to win a slot in the race's annual lottery.

[A monster on the uphill, Patterson cruises to win in men's race]

Who can beat Allie?

At just 20 years old, it's hard to see many women challenging Ostrander when she chooses to race again, said Holly Brooks, the 2012 and 2014 champion who's pregnant with twins and helped call Tuesday's television broadcast. Ostrander has speed going up the mountain and can afford to lose time on the downhill given her quickness on the pavement homestretch, Brooks said.

"The right person, maybe, but man — it's going to take a lot to beat her," Brooks said. "Her climb was killer, she had a couple of fumbles on the downhill but even if she loses a couple of seconds or half a minute on the downhill, she's obviously untouchable on the road."

Ostrander's competitors were quick to look to the future, however. Arritola said in an interview at the finish that she was already thinking about plane tickets back to Alaska, and wants to give herself more time to study the course next year.

Denali Foldager-Strabel, who finished fourth, said the rest of the elite women's field isn't ceding any ground, either. She said she took a different path up the first part of the climb Tuesday and found herself above Ostrander early in the race — then watched as Arritola and Marvin kept the pressure on.

"I wasn't afraid and I don't think anybody else is afraid, either. I want to win next year, for sure, and I know Christy Marvin walked away wanting to win," Foldager-Strabel said. "I want to push Allie. If Allie's going to break a record, I want it to be because she had competition and we helped her."

Ostrander predicted that Forsberg's record will fall within 10 years.

"The times on Mount Marathon keep seeming to get faster," she said. "Everyone always has room for improvement on this mountain — and there are a lot of eyes on that record and it'll eventually come down."