The school gym wasn’t available, so Adrianna Proffitt has a front-yard signing ceremony 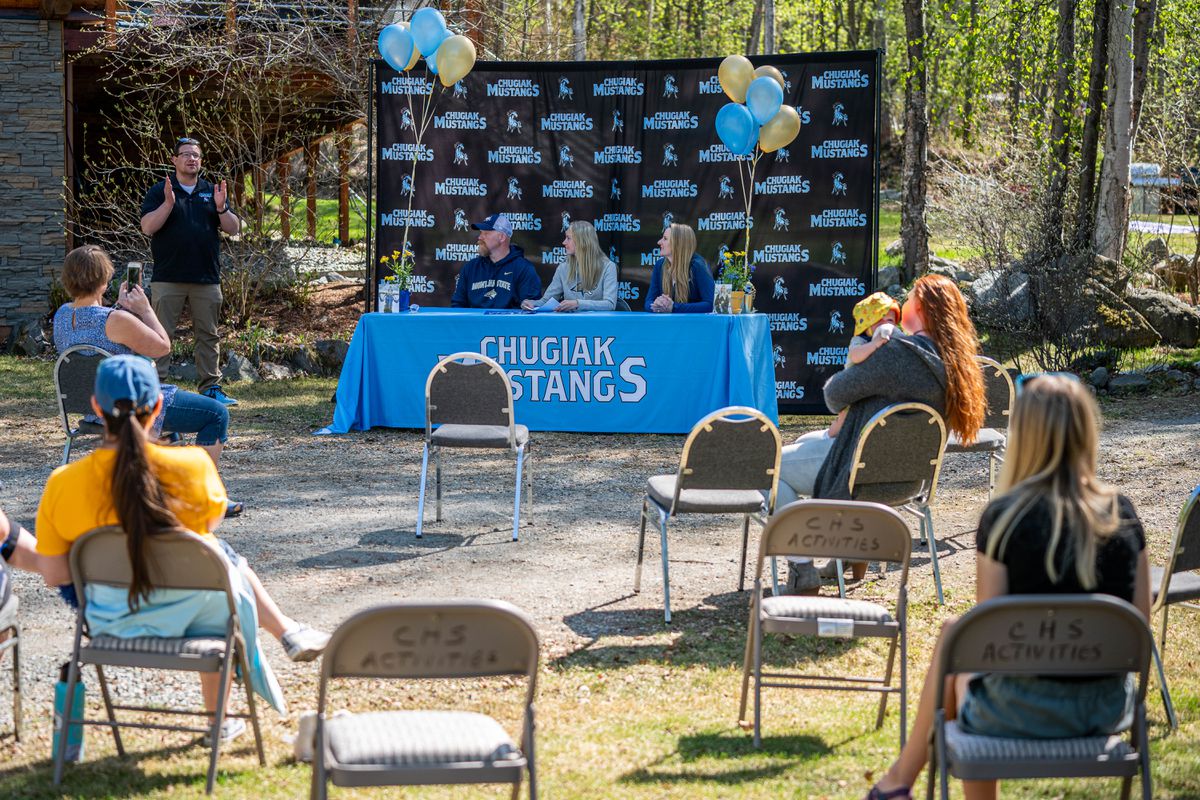 Chugiak High School graduate Adrianna Proffitt sits between her parents in their driveway on Friday, May 15, 2020 before signing a letter of intent to ski for Montana State. (Loren Holmes / ADN)

Chugiak High School graduate Adrianna Proffitt sits between her parents in their driveway on Friday, May 15, 2020 before signing a letter of intent to ski for Montana State. (Loren Holmes / ADN)

To get to Adrianna Proffitt’s home in Peters Creek, you drive down Ski Road, which is pretty perfect. Ski Road takes Proffitt home, and skiing is taking her to college.

Her home is part of the story of Proffitt’s decision to attend Montana State University, because Proffitt’s front yard was the scene of a letter-of-intent signing ceremony on a sunny afternoon Friday.

She said a few words of thanks. A few coaches took turns praising her work ethic, talent and attitude, and then Proffitt signed her National Letter of Intent.

Anchorage School District facilities are closed because of the COVID-19 pandemic, so letter ceremonies that usually happen in gyms are out of the question. This spring many kids made commitments with no fanfare, but Proffitt got a ceremony, a cake and a sweet memory at a time when the new coronavirus is spoiling all kinds of senior-year rituals.

“The fact it was in my front yard at my house made it a little more personal,” she said. “It was a good feeling to have the people who helped me become an athlete there. It was a really happy moment regardless of all the disappointing things happening left and right.”

Scores of Alaska high school athletes will become college athletes in the fall, at every level ranging from community colleges to NCAA Division I schools. The Alaska Sports Hall of Fame has compiled brief spotlights of nearly 100 college-bound athletes.

Here, we look at three who earned Division I scholarships.

Always a talented runner, Santiago Prosser of Dimond High emerged as a Division I prospect during his senior season of cross country.

“Last year was a turning point,” said Doug Herron, his Alaska Running Academy coach. “He’s always had the potential, it was just a matter of learning how to train and not to get hurt. Learning patience and being coachable, that was kind of the difference.”

Prosser, 18, turned in a spectacular senior season in cross country. At the Bartlett State Preview Meet in August, he broke the 5-kilometer course record with a time of 15 minutes, 7 seconds — a personal best by 30 seconds.

A couple weeks later at the Big 8 Invitational, he broke a Kincaid Park course record that had stood since 1993 by running 15:24. He went on to win the Division I state championship in 15:14.

Those times put him on the radar of college coaches. Several schools showed interest, including the University of Oregon, the juggernaut where his uncle, the late Laird Prosser, competed in the 1990s.

“I came really close to picking them,” Prosser said. “My uncle went there, and Don Clary — these huge legendary Alaska runners. But I needed to create my own path.”

That path will take him to Northern Arizona in Flagstaff, a powerhouse in its own right — the Lumberjacks have won three of the last four NCAA national championships.

“I told him, ‘racing.’ Most of why I get up in the morning to run or aqua jog is I want to win races,” Prosser said. “He said that’s something you can’t coach.”

Prosser said his desire to win is what set up his big senior year. After winning the Cook Inlet Conference championship as a sophomore, he placed third as a junior.

“I was always good at running and didn’t have to put much effort into it,” he said. “Then (Chugiak runners Daniel Bausch and Hyrum Nelson) started beating me, and I said there’s no way that’s gonna happen my senior year.”

Becoming a second-generation Division I runner is a source of pride, he said. His uncle, he said, was “super inspirational.”

“I also watched Trevor (Dunbar) and Allie (Ostrander) and all those great Alaska runners," Prosser said, "and it’s exciting that I get to be the person now to go to the NCAAs and inspire others.”

Carly Glover of Kodiak learned to play hockey the same time her dad did. She was 4, and he was 40.

"My whole childhood he told me, ‘Stick with hockey. You don’t know where it will take you,' ’' Glover said.

It took John Glover down the volunteer route. Seven years ago, he started the Kodiak Hockey League, home to about 150 kids who keep the town’s outdoor rink busy each winter.

It’s taking Carly Glover to Merrimack College in Massachusetts, where she will be a forward for the women’s team.

Though Glover started skating early, she said she didn’t begin to refine her skills until she started playing comp hockey at age 14. She wound up playing for the Alaska All-Stars and flying back and forth between Anchorage and Kodiak.

“I was pretty raw,” Glover said. “I didn’t have many skills, but I had a good base.”

She developed in a hurry. Glover, a forward, has been selected for two national development camps and she has shined at college showcases — at a Detroit showcase, she scored eight points in five games.

“Her attitude is amazing and 4 years ago she didn’t even know college hockey was an option for her, much less D1,” said Cristi Ingram, coach of the U19 team. "There were many days of airport waits/delays for her (when Kodiak) was weathered in."

Glover was part of a high-scoring line for the All-Stars that also included Journey Miller and Nicole Ness, who also are headed to Division I hockey — Miller at Minnesota State and Ness at St. Cloud State.

“We all compete super hard," Glover said. “It pushes us.”

She comes from a place that is the Norway of the United States, and she skis like it.

Adrianna Proffitt is a two-time Skimeister in the Cook Inlet Conference and placed third in the overall standings at the 2020 state championships. As a member of Team USA, she delivered a top-10 finish at the 2019 Scandinavia Cup in Estonia, marking a good start to her international career.

She is leaving Alaska to ski collegiately in the Lower 48, but as luck would have it, she’ll be coached by a fellow Alaskan — Matt Johnson, the women’s cross-country ski coach at Montana State. Johnson is a former Alaska Winter Stars coach who was a top skier for Service High.

“I met him at the U.S. National Championships in January,” Proffitt said. “I had a feeling in my stomach that’s where I would land. I looked at the University of Utah but it didn’t feel right, and as soon as I met him and we were able to talk, I was like, OK, I think I made my decision.”

She made that decision weeks ago but didn’t sign a letter of intent until this week, in a front-yard ceremony set up by her mom.

“She said, ‘Let’s come up with something.’ She went into Plan B, Plan C, Plan D,” Proffitt said. “I think Plan Z is the one we ended up going with.”

Such is life for the Class of 2020, which has been forced by the pandemic to either scrap traditions like proms and graduations or find creative ways to preserve them without getting people together.

Proffitt did manage to have a version of the prom, courtesy of KGOT Radio’s virtual prom on May 1.

“I got to listen to the music, I got to wear the dress, and I got to dance with my boyfriend,” she said.

And where did it happen? Her front yard.