As he waits to join the Boston Bruins, Anchorage goalie Jeremy Swayman trades pucks for peaks 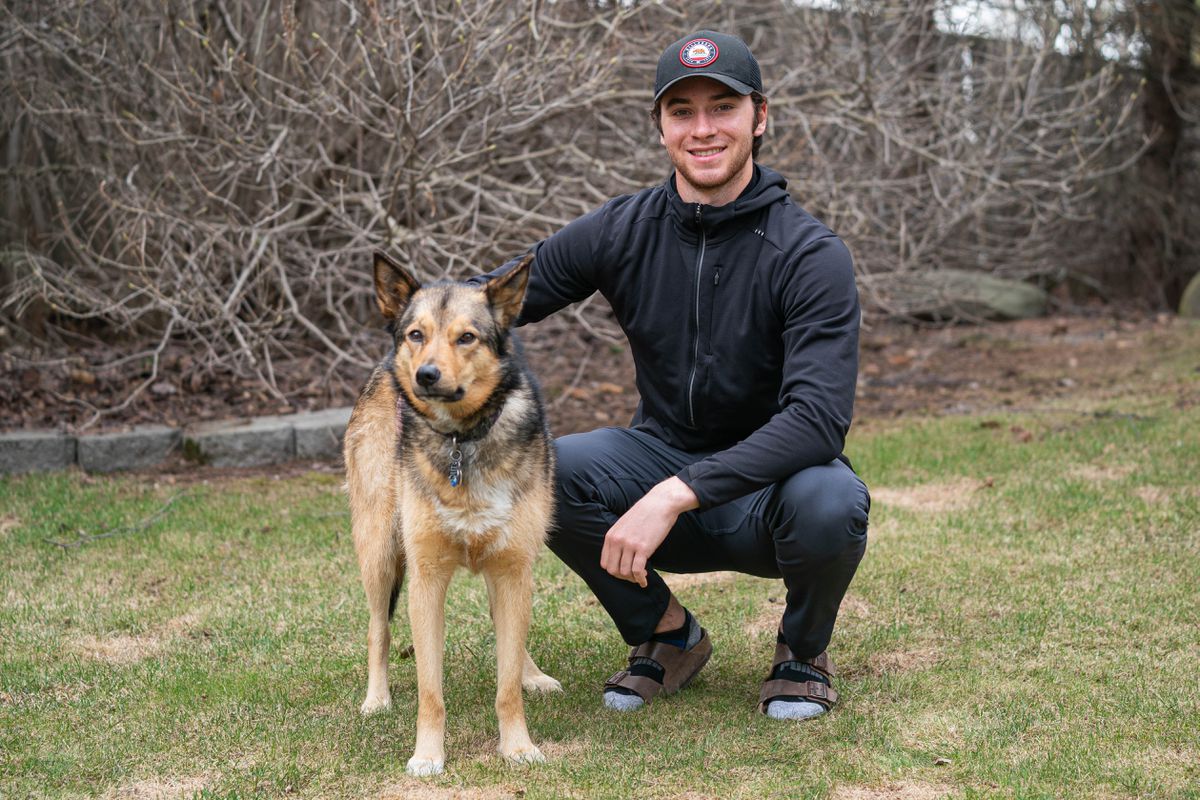 Jeremy Swayman, poses for a photo with his dog Jade. Swayman, the top college goalie in the country in 2019-20, recently signed a three-year contract with the Boston Bruins of the NHL. (Loren Holmes / ADN)

Jeremy Swayman, poses for a photo with his dog Jade. Swayman, the top college goalie in the country in 2019-20, recently signed a three-year contract with the Boston Bruins of the NHL. (Loren Holmes / ADN)

The last hockey game Jeremy Swayman played was with the Maine Black Bears. The next hockey game he plays is all but certain to be with the Boston Bruins organization.

No wonder, then, he is making the transition from college hockey to pro hockey by training in bear country.

Swayman, 21, is waiting out the longest intermission of his life — the shutdown of NCAA and NHL hockey because of the COVID-19 pandemic — in Anchorage and the mountains that press up against the east side of town.

He’ll be here until NHL training camps open, and no one is quite sure when that will happen. “Everything is up to the virus, really," he said.

As he waits, he is staying fit with afternoon hikes in the Chugach Mountains. He’s had his share of bear sightings along the way — a mom and two cubs one day, and what he thinks was a brown bear on another.

From the top of Bird Ridge on a recent bluebird day, Swayman recorded a video message to Boston Bruins fans. “I wanna show you guys what I’ve been up to” during the quarantine, he said, turning his phone away from himself and toward the spectacular view all around him.

Swayman has been doing a lot of winning lately.

He claimed a mountain of college hockey awards at the end of his junior season at the University of Maine: Hockey East Player of the Year, Mike Richter Award as college hockey’s best goaltender and first team NCAA All-America. And he was one of three finalists for the Hobey Baker, college hockey’s highest honor.

In his final college game, Swayman made 48 saves in a 1-0 victory over Providence that clinched a home playoff series for the Black Bears. The day before the Hockey East quarterfinals were scheduled to begin, the NCAA canceled the remainder of the season because of the pandemic.

A few days later, Swayman signed a three-year entry level contract with the Bruins, who selected him in the fourth round of the 2017 NHL draft.

“I knew I wanted to be a pro ever since I started playing hockey,” said Swayman, who played in Anchorage youth leagues and for two years at South High before leaving home to play junior hockey in the Lower 48. “I was confident about (the decision). I know more people have more experience than me in pro hockey, but I was ready to make the jump.”

The Bruins have two goalies signed for the 2020-21 season, including 2014 Vezina Trophy winner Tuukka Rask, still one of the best in the league. Rask is 33 and backup goalie Jaro Halak, who just signed a one-year extension, is 35, so goalie prospects are important, and Boston has two promising ones: Swayman and 22-year-old Dan Vladar, who turned in a strong season for the Providence Bruins of the American Hockey League.

Whether Swayman winds up making Boston’s NHL roster or, more likely, plays with the AHL in Providence, Rhode Island, Swayman said his goal will be the same:

Swayman, who is 6-foot-3 and 200 pounds, describes himself as a hybrid goalie, a blend of the stand-up style and butterfly style.

“It evolved the last three years,” he said. “Before college I was very sporadic. I trusted my athletic abilities a little too much.”

In college, with the aid of Black Bears goalie coach Alfie Michaud, Swayman said he learned how to make his movements more precise and slow things down a bit while still making the most of his athleticism and flexibility.

“We got a tip about Jeremy,” he said, “and the first time any of us went out to see him play, it was clear he has extraordinary athleticism. You could see he had the mobility and puck-tracking skills we have been accustomed to seeing from someone like (former Hockey East great) Jonathan Quick."

Swayman said his workouts include yoga and Pilates, which help with balance. Since he’s been in Anchorage, he spends his mornings following Maine’s workout regimen, which he said includes a lot of high-intensity, high-repetition circuit training in the morning.

“Then I eat lunch, and then I get up into the mountains,” he said. “It’s basically been a mountain a day."

He often hikes with fellow hockey players Croix Evingson of Anchorage, a defenseman who just finished his junior year at Niagara College, and Trevor Paradise, a Division III player from Colorado.

“Mountain running’s great,” he said. “You can really isolate yourself, it’s great cardio, of course, and it’s a mental break.”

Though he’s eager to get to Boston to meet his new teammates and return to the ice, Swayman said he’s lucky to be in his hometown while sports are on pause throughout the world. The hiking here is amazing, and he’s able to spend a lot of his time outdoors.

While he’s here, he’s living with his dad, Ken Swayman, who grew up in Brooklyn and is a big New York Rangers fans. When he was growing up, the walls of the house were covered with Rangers posters.