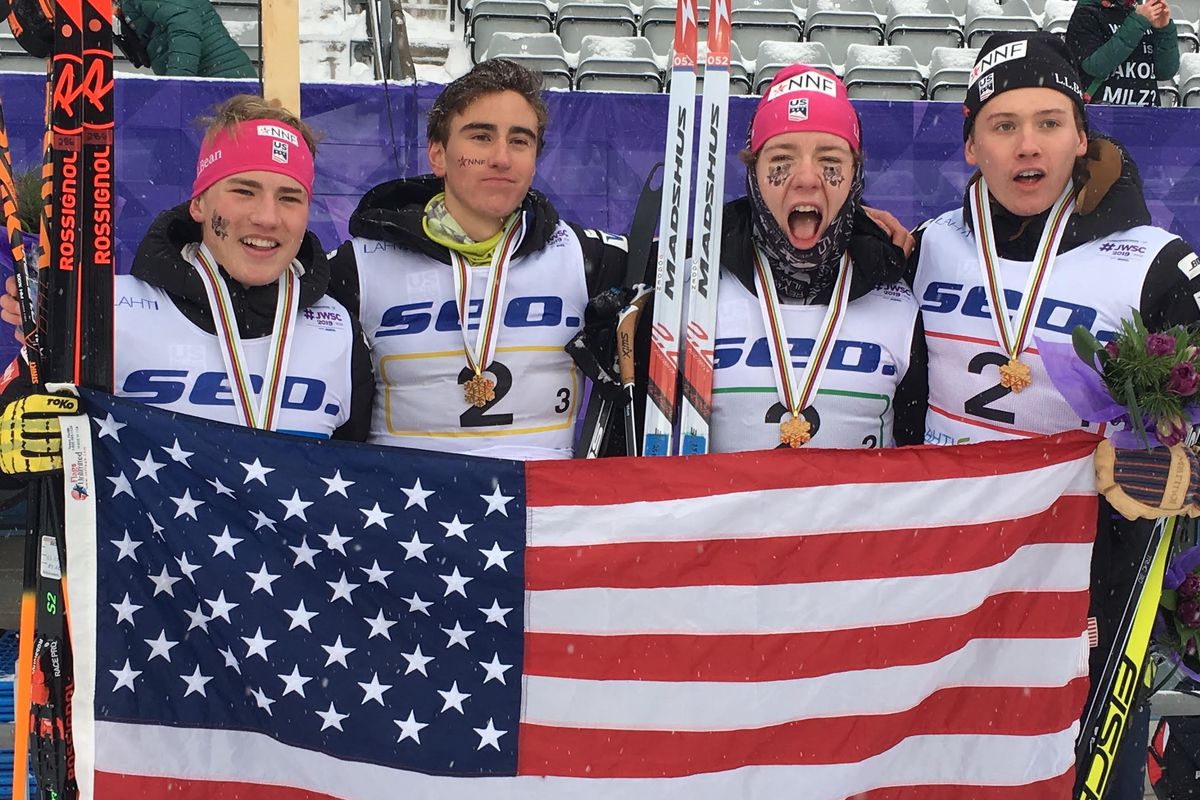 Anchorage skiers Gus Schumacher and Luke Jager helped the United States rule the world, boosting the men’s relay team to victory on the final day of the 43rd annual championships for skiers under 20.

They teamed up with Ben Ogden of Vermont and Johnny Hagenbuch of Idaho to win the 4x5-kilometer relay by 3.8 seconds over hard-charging Russia, which claimed silver. Germany took third place, 6.3 seconds behind the Americans.

“To see a dream of ours and so many others come true was pretty incredible and hard to describe,” Jager said by email. "Our medal belongs to the entire community that helped make it happen. So many people have worked so hard to help us get here and we are so so appreciative and thankful for that.

Schumacher, an 18-year-old Alaska Winter Stars skier, capped a brilliant race series with a gritty anchor leg that sealed the victory, the first in World Junior history for the American men. He was mobbed by his teammates when he crossed the finish line at Lahti Stadium.

“The gold medal means a ton, and the rest of my week doesn’t really affect how I feel about it,” Schumacher said by email. “It’s just crazy to deliver on a movement that has been so long in the making, and prove that (U.S.) skiing is really here and a force to be reckoned with.”

The American women, specifically Anchorage’s Kikkan Randall, started the movement more than a decade ago by showing the U.S. skiers can be competitive on the world stage.

Randall made history repeatedly in a 16-year career that spanned four Olympics, earning frequent trips to the World Cup and World Championship podiums and capping her career with an Olympic gold medal last year in South Korea. Other women like Anchorage’s Sadie Bjornsen and Minnesota’s Jessie Diggins followed her example, and now the U.S. women’s team is one of the best in the world.

The American men have been playing catch-up, and Saturday’s victory is one of the biggest moment for them since Bill Koch won an Olympic silver medal way back in 1976.

“The level of expectation has risen in USA Cross Country skiing,” Bryan Fish, the U.S. Ski Team’s cross country sport development manager said earlier in the week. “We know we can compete. More importantly, the young athletes believe it and are training hard to achieve those lofty goals.

“It is crazy to think that our first (Junior) World medal in US history was earned just in 2017 but we have had five medals in these short two years.”

The medal count rose from five to six thanks to Saturday’s triumph.

Two of the country’s six World Junior medals have come in the men’s relay – and Schumacher and Jager contributed to each of them.

A year ago, Schumacher, Jager, Ogden and Anchorage’s Hunter Wonders (a U23 skier this season) skied to the silver medal. Last year’s was the first World Junior medal in history for the American men; Saturday’s is the second.

With Kramer skiing the second leg, the American women finished fourth in the 4x3.3-kilometer relay, 7.2 seconds behind the bronze-medal team. Kramer, a 16-year-old FXC skier, was coming off an impressive 15th-place finish in Thursday’s 15K classic.

Sufficiently inspired by the women’s race, Jager got the American men off to a terrific start with his classic-technique scramble leg.

“I knew the pace was going to be really hard in the start and we made the plan (to) just chill out little bit," Jager said at a post-race press conference. "I was confident with my skis and I was able to save lot energy.

"It was pretty tight in the end, but yeah I’m very happy.”

Perhaps most critically, Jager forged a 12-second lead over Russia, a team anchored by mighty Alexander Terentev, the winner of gold and silver in two individual races earlier in the race series.

“Seeing Luke lead was cool,” Schumacher said. “It just showed that we were definitely in a pretty commanding position through the race.”

Ogden kept the United States in the lead, tagging off to Hagenbuch with a 2.2-second edge.

Hagenbuch dropped into third place, but not by much -- when Schumacher took over for the final leg, he was 2.0 seconds out of the lead and 1.4 seconds out of second place.

Schumacher battled with the lead pack until seizing the advantage on a downhill and then powering up the next hill to build a decent gap in the final kilometer of his freestyle-technique leg.

“I started a couple seconds behind Germany and Norway and caught them pretty quickly, which was nice, and just kind of tucked in with them,” Schumacher said, “and the group behind us (Finland, Russia, and Sweden) slowly caught us.

“Then it was a 6 person group about halfway though, then the German pushed the pace and started to break open the field and I just hung onto him and put in a surge around 3 (kilometers) which he continued.

“Then it was us and Russia and I cruised into first on the second to last downhill and then went super hard up the last hill, got a bit of a gap and held that to the finish.”

The Americans finished in 45 minutes, 34.7 seconds. Second-place Russia clocked 45:38.5 behind Terentev’s blazing anchor leg, which carried his team from fifth place, more than seven seconds out of the lead, to the silver medal.

On Thursday, Schumacher finished a heartbeat away from a medal in the 30K classic, where he was part of a four-man sprint finish. That race proved to be a harbinger of Saturday’s milestone -- all four American men finished in the top 17 of that race, with Schumacher fourth, Ogden 10th, Jager 13th and Hagenbuch 17th. For a portion of the race, the Americans skied at the front of the pack.

The women also skied well on Thursday, with Kramer finishing fourth and Novie McCabe of Washington placing 10th in the 15K classic.

“Two fourth-place finishes and two tenth places in both the men and women’s (races) sheds light on a positive future,” Fish said. “More encouraging and inspiring was when all four of our boys went to the front of the lead pack and worked together. They fought hard and highlighted our culture of ‘team’ and demonstrated they how far we have come in this sport.”

Though the World Junior competition is over, there’s still one more day of racing in the U23 World Championships in Lahti, where APU skiers Hailey Swirbul, Hannah Halvorsen and Hunter Wonders are among those vying for spots on the American teams for Sunday’s relay races.

Swirbul, who led the U.S. by placing 10th in Friday’s 15K classic for skiers under 23, won three medals at the World Junior level -- silver and bronze in individual races last year, and bronze in the 2017 relay race. The only other U.S. skier to win a medal at the World Juniors is Vermont’s Katharine Ogden, who in 2017 took bronze in an individual event and was on the medal-winning relay team with Swirbul.

This story has been updated with comments and other details about the race.