In a snowy finish, Jessica Yeaton and Magnus Noroey take Tour of Anchorage by storm 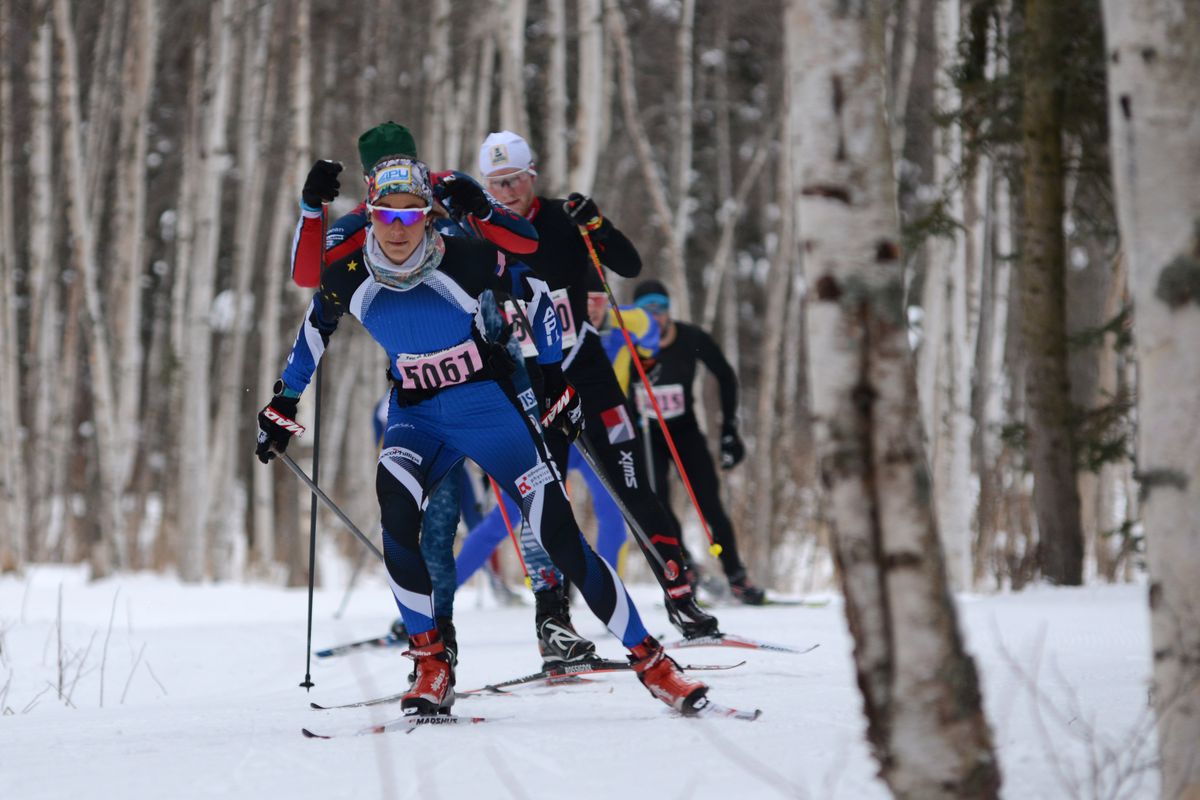 Jessica Yeaton leads a pack of skiers along the Chester Creek trail during the Tour of Anchorage 50K race. (Anne Raup / ADN)

Jessica Yeaton leads a pack of skiers along the Chester Creek trail during the Tour of Anchorage 50K race. (Anne Raup / ADN)

A blizzard hit just in time for the end of the 50-kilometer Tour of Anchorage ski race Sunday at Kincaid Park, an appropriate conclusion given the winners absolutely stormed to victory.

Marathon woman Yeaton, 28, claimed her second major 50K title in 15 days by skiing away from the rest of the women a few kilometers into the race. She proceeded to pick off many of the top-seeded men, who started two minutes ahead of the top women, to place eighth overall in the field of 130 men and 49 women.

Yeaton, the winner of the American Birkebeiner two weeks earlier in Wisconsin, was one of two women who enjoyed big wins in the 50K.

The other was Marine Dusser-Bjornsen, the UAA ski coach who didn’t strap on skis for the race but instead provided critical help for the top two men’s finishers.

She’s the coach of the winner and the wife of the runner-up, and she prepared the skis for both men before the race.

Noroey, a UAA freshman from Norway, came on strong in the second half of the race to defeat Bjornsen, who married Dusser-Bjornsen in the summer of 2018.

So which skier did she root for? “That’s a tough question,” she said.

Bjornsen built a big lead and kept it for more than half the race before Noroey reeled him in.

“At 25K he was ahead by two and a half minutes, then I heard a minute, then 40 seconds,” Noroey said. “I got so much energy when I passed him because I didn’t think I could catch him.”

Noroey, 21, said he pulled away from Bjornsen, 28, with about 7 kilometers to go, right around the same time it started snowing hard on the west side of Anchorage. He and Bjornsen both skied alone from there on.

Noroey, 21, was in the race because he didn’t qualify for this week’s NCAA skiing championships that begin Wednesday in Montana.

Dusser-Bjornsen said he had a challenging introduction to college skiing because he has struggled to adjust to altitude at UAA’s races in the Lower 48.

“He has not shown what he is capable of until today, so it was good he did that,” she said. “Erik is a World Cup skier, so Magnus was a little out of his league, but he had good skis and he was very good on the flats.”

Noroey can thank both of the Bjornsens for his skis. Bjornsen gave them to him at the start of the season, and Dusser-Bjornsen waxed them before the race.

Bjornsen, part of the Alaska Pacific University ski program, “started too fast and paid for it,” his wife said.

“I tried to go out hard and set a pace that I thought I could sustain,” Bjornsen said. “I started kind of losing energy with 10K to go (Noroey) went by me pretty fast, and that kinda demoralized me.”

At least he didn’t get passed by Yeaton, something few of the skiers who started in the elite men’s wave can say. She passed 39 of the 47 men who started two minutes ahead of her in the first wave.

The race started at Service High, and Yeaton broke away from the top women by the time she got to the Spencer Loop a few kilometers away.

“I saw her at the beginning of Spencer Loop, and she just pulled away,” said Caroline Brisbois, last year’s winner who placed second on Sunday, 8:10.3 behind Yeaton.

Yeaton, a 2018 Winter Olympian and 2010 South High graduate who is attending graduate school at the University of New Mexico, skied with a pack of men for several kilometers before leaving them in pursuit of others.

“I always had someone to chase,” she said.

The storm hit right about the time she got to Westchester Lagoon.

“It came on so fast,” Yeaton said, “and (conditions) suddenly got slow. It was tough with the snow, but it was kinda nice to be in a winter wonderland.”

Nearly 800 skiers and bikers finished this year’s Tour. The majority were skiers, who had their choice of four races — 50K freestyle, 40K classic, 25K freestyle and 25K classic. The three fat bike divisions — 50K, 40K and 25K — had 84 finishers.

In the 50K bike race, David Arteaga claimed victory in a close race — six bikers finished within a 30-second span.