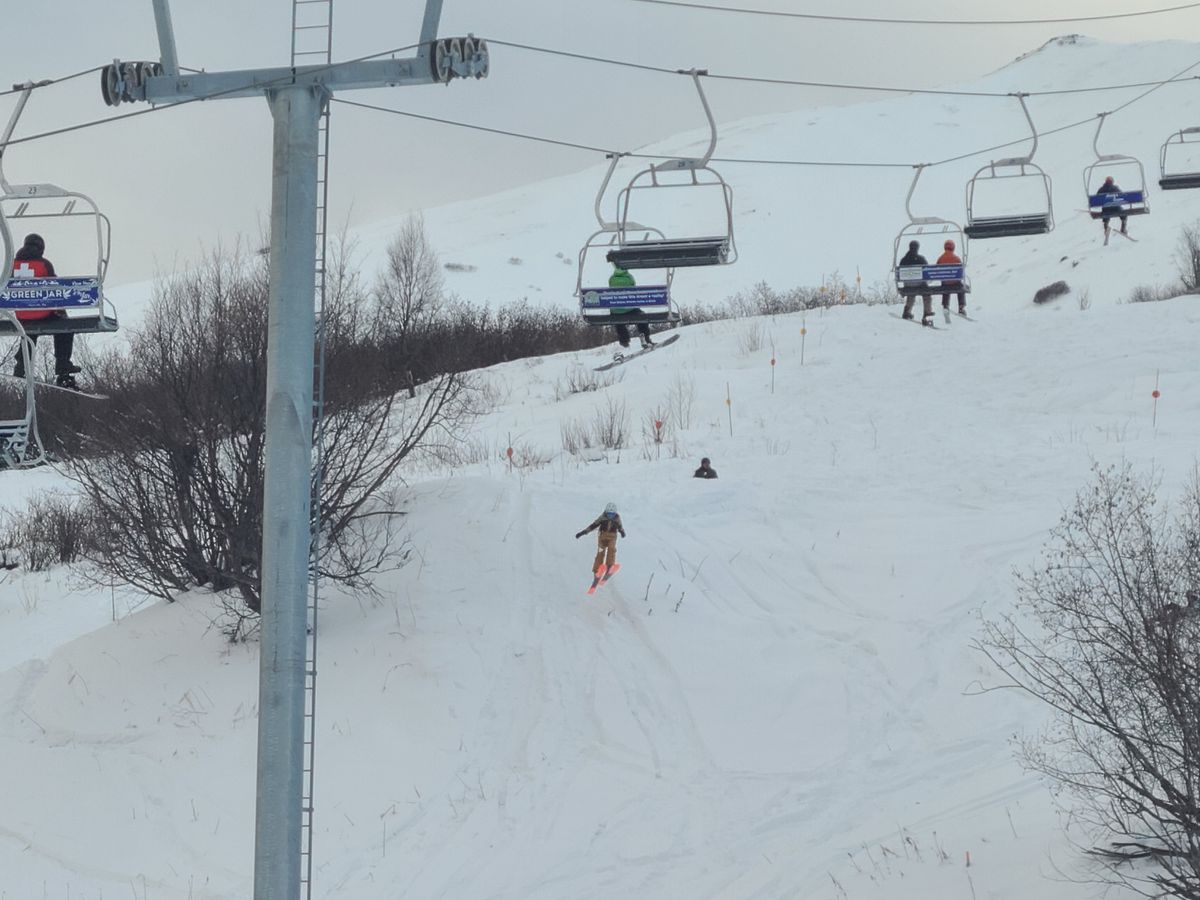 A soft opening last weekend brought season pass holders and board members to Skeetawk, the new alpine ski resort at Hatcher Pass. The area opens to the general public Saturday and Sunday. (Photo by Scott Patridge)

A soft opening last weekend brought season pass holders and board members to Skeetawk, the new alpine ski resort at Hatcher Pass. The area opens to the general public Saturday and Sunday. (Photo by Scott Patridge)

Long imagined and often doubted, alpine skiing will come to Hatcher Pass this weekend with the opening of the Skeetawk ski area.

Carved into the Talkeetna Mountains by a platoon of volunteers from nearby communities, North America’s newest alpine ski area will operate during daylight hours Saturday and Sunday.

A 30-chair triple lift capable of carrying 500 people per hour will take skiers and snowboarders to a single groomed run, a beginner’s run called Altitude. The terrain park is open, and more runs will open once the 30-acre area gets more snow, general manager Scott Patridge said Thursday.

He promises a true Alaska experience.

“This ski area is very rugged, very Alaskan, and people will definitely have to come up here with quite a bit of self-sufficiency in mind,” Patridge said. “It’s cold — there’s not a warming hut, there’s not a day lodge — and you’re driving up into the mountains in rural Alaska. The roads in this area are not always plowed in a timely manner.

“You’re going to have a great time, but there’s not a lot of amenities.”

Operated by the nonprofit Hatcher Alpine Xperience, Skeetawk is about a 20-minute drive from downtown Palmer or downtown Wasilla.

It’s the first alpine ski area at Hatcher Pass — long a destination for cross country skiers — since the 1970s, when there was a rope tow and poma lift at Independence Mine.

Developers have long had an interest in bringing alpine skiing back to Hatcher Pass, but it took a grassroots effort to make it happen, according to Louisa Branchflower, who served as chairwoman of the Hatcher Alpine Xperience board of directors from 2015-18.

“We decided our best course of action would be to start a nonprofit and build the area ourselves,” she said. “We got buy-in from the local Fishhook Community Council within the first year. That’s the most important thing — we did this with the blessing of the community and with the help of everybody.”

Branchflower, 39, remembers posting notices around the Valley five years ago seeking input from residents about a potential ski area. She was pregnant with her second child at the time. Last weekend, she took 4-year-old Oscar and 7-year-old Penelope to Skeetawk’s soft opening for season pass holders and board members.

It was a bit of a pinch-me moment for volunteers who spent years working to make alpine skiing at Hatcher Pass a reality.

“The biggest hurdle was to prove we were real,” Branchflower said. “The knee-jerk reaction was ‘It’s never gonna happen.’ ’'

It didn’t happen because of a big developer showed up, although a couple showed interest over the years. It happened because of volunteers.

“We have a huge volunteer list — I can’t even count the number,” Patridge said. “We’ve had a lot of people volunteering for a long time.”

“Some have put in thousands of hours and some were able to come up for the weekend to do some trail-clearing,” Branchflower said. “We build a lot of the facilities ourselves.

“... It means so much to know you made it happen. I think that’s why it’s been successful — we went about it in a different way than a business coming in to make some big profits. It was the community pitching in, whether it was sponsors, grant money or the hours from volunteers.”

A $500,000 grant from the Mat-Su Health Foundation helped pay for the chairlift. Sponsorships appear on the backs of all 30 chairs — $7,000 apiece, good for the life of the chairlift — and fundraisers brought in more money.

Skeetawk is located near Mile 10.6 of the Palmer-Fishhook Road. Depending on road conditions, four-wheel drive might be a good idea, Patridge said.

A yurt will be open for people to use restrooms and pick up season passes, but not for anything else. Like every other alpine ski area in the country, skiers and snowboarders are being told to use their car as their lodge to limit the spread of COVID-19. Masks are required in the yurt, lift lines and anywhere else social distancing isn’t possible.

Webcams on the Skeetawk website include views of the parking lot and the lift line.

The parking lot will open around 9:30 a.m. and close at 5 p.m., and the lift will run from 10:30 a.m. till about 3:30 p.m. The area will be open Saturdays and Sundays, with additional days of operation when the Mat-Su Borough School District begins its holiday break Dec. 21.

Future plans include ski rentals and lessons; snowmaking and lights; and a high-speed quad.

“We’ve got a lot of that in the master plan,” Patridge said. “The word now is patience — people have been waiting 30 years to get this ski lift up. The ski lift is here — let’s enjoy it.”

An early version of this story incorrectly stated where $500,000 in grant money came from.