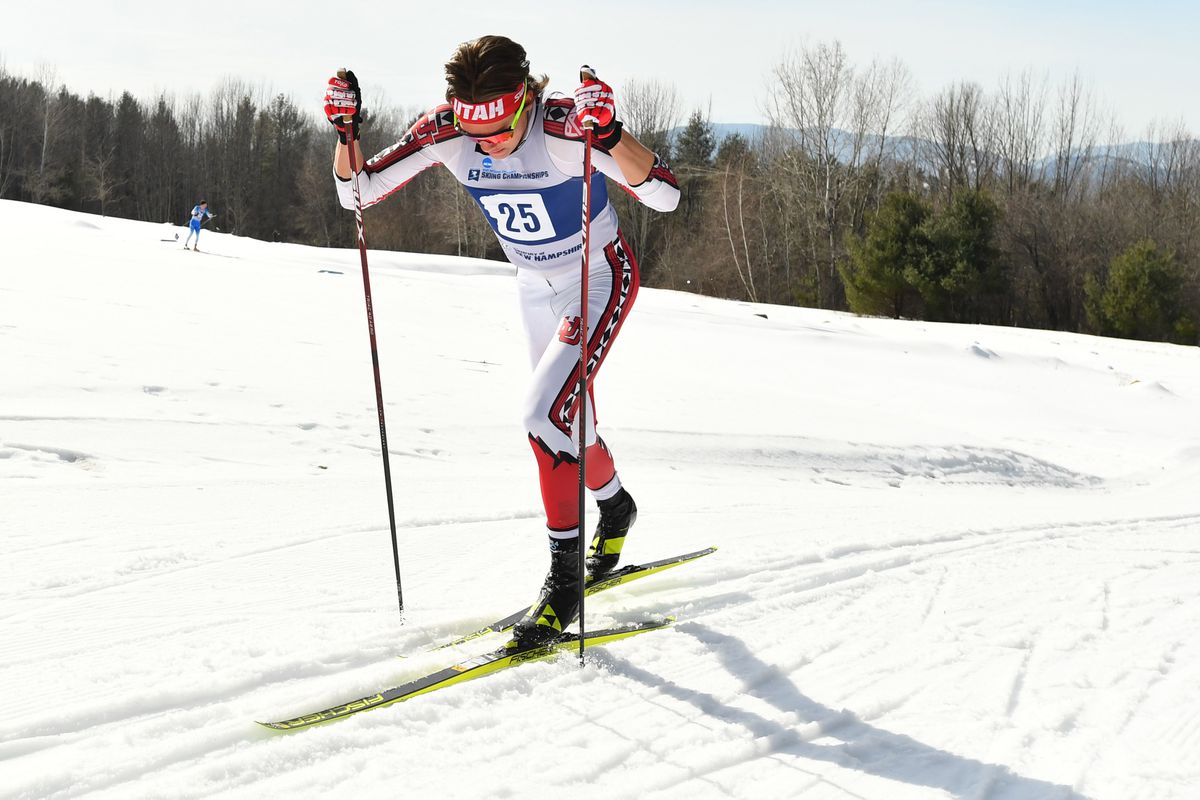 After providing a fairly detailed account of how he became the national runner-up Thursday at the NCAA Ski Championships, Anchorage’s Luke Jager offered a succinct prediction of what his day will be like Friday.

“Damn, my back is gonna be sore tomorrow!” he texted from New Hampshire, where he captured second place in the men’s 10-kilometer classic race.

Faced with wet snow and temperatures in the 50s, Jager decided to abandon his classic skis, step into skate skis and race without the benefit of kick wax. He double-poled the entire 6.2 miles, and although he expects to pay for the effort with some sore muscle Friday, it was a deal he was willing to make.

“I had some dark moments in some of the bigger climbs but they were faster enough on the downhills that I think it was a good decision for me,” said Jager, a sophomore at the University of Utah.

He wasn’t the only one to go the double-pole route. The UAA men made the same choice, and two of them skied into the top 10 to claim All-America honors.

In all, the Seawolves produced four All-Americans — fourth-place Espen Persen and ninth-place Magnus Noroey in the men’s 10K, and fourth-place Astrid Stav and sixth-place Tuva Bygrave in the women’s 5K classic race.

“It was a surreal weather day for sure,” he emailed. “When we left the stadium it was 59 degrees. The snow was very wet and dirty.

“All our boys decided to double pole without kick wax, which basically means using mostly your arms and core to muscle your way around the course.”

The men’s victory went to the University of Colorado’s Magnus Booe, who used klister wax and was able to pull away from Jager on the final uphill to win in 26 minutes, 17.7 seconds. Jager was 13 seconds back.

Anchorage’s Zanden McMullen, who skis for Montana State, was 11th, 1.6 seconds away from an All-America finish. UAF’s Christopher Kalev was 14th and UAA’s Sigurd Roenning was 19th.

In the women’s race, Utah staged a podium sweep led by winner Sydney Palmer-Leger in 15:50.7.

UAF had two women in the top 12 — seventh-place Mariel Pulles and 12th-place Kendall Kramer — and UAA’s Pascale Paradi, a freshman from Calgary, was 17th. A pair of Anchorage skiers who race for Montana State — Adrianna Proffitt and Aubrey Leclair — placed 20th and 28th, respectively.

Four All-America finishes in a single day is rare but not without precedence for the Seawolves. It happened at last year’s championships in Bozeman, Montana, where three men and one woman garnered top-10 finishes in the classic race.

“We had a great day,” Flagstad said. “The girls had a fantastic day.” Stav and Bygrave were both in contention for third place until the last kilometer, and Paradis finished just 12 seconds out of 12th place.

Jager said he spent the morning testing skis in the warm weather.

“I was testing pretty much every pair of klister skis I have and they were all dragging quite a bit and just felt pretty slow,” he said. “I had some skate skis out there and tested them and they were really fast. I was like alright, let’s just go for it.

“... I was just about even with Magnus at 8 (kilometers) but was just leaking time on that last big hill before dropping into stadium, especially with Magnus on kick wax.”

Jager, who spent time in Europe earlier this season to compete in the U23 World Championships, said Thursday’s race was the highlight of a difficult season.

“(It) had been a really frustrating year for me after making some dumb training decisions in the fall that have sort of left me struggling to find any shape for most of the season,” he said. “So to be able to feel good today and have a good one for the team and people who have had my back through lots of ups and downs was pretty awesome.”

Competition continues in New Hamphire with slalom races Friday in Franconia, followed by a freestyle cross-country race Saturday in Jackson.