University of Alaska regents meet this week. Here’s how UAA sports hope to save themselves. 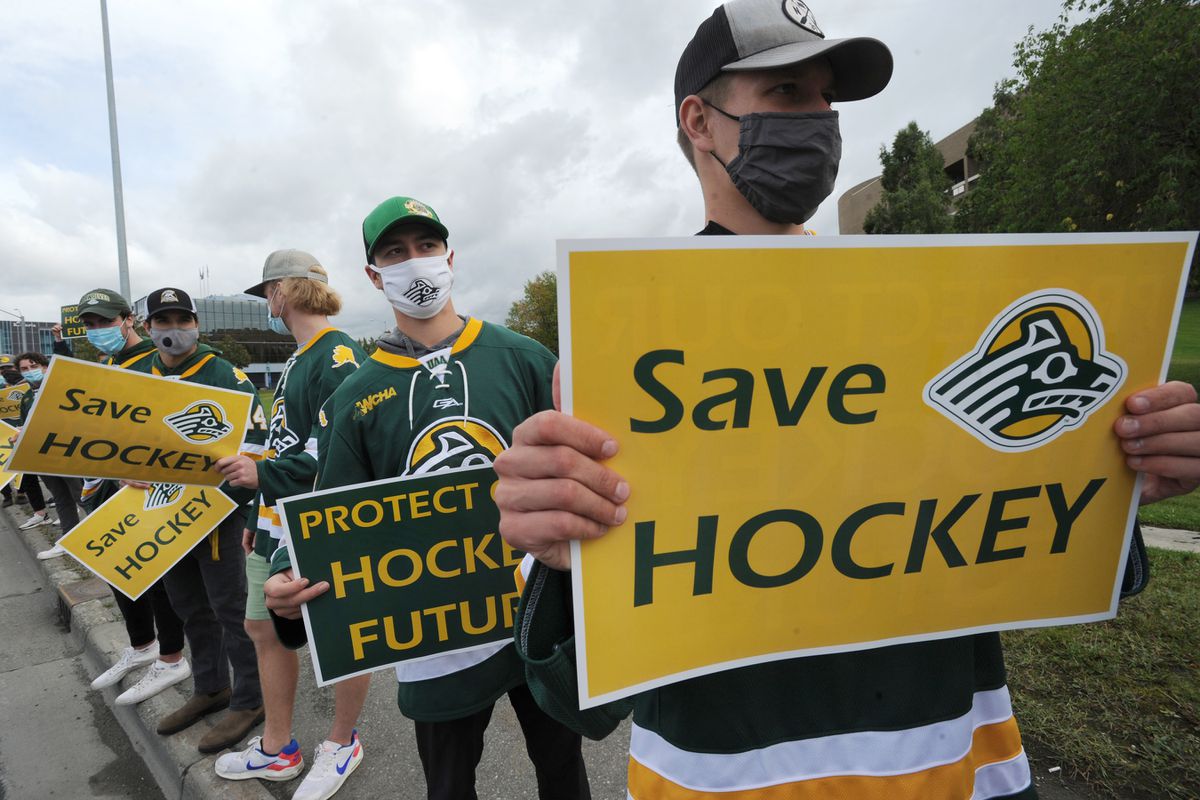 The fate of UAA hockey, skiing and gymnastics could be decided Thursday by the University of Alaska Board of Regents, and each program has taken a different approach when it comes to saving their sport.

Men’s hockey is asking for time.

Women’s gymnastics is asking for flexibility.

Men’s and women’s skiing is asking for the pursuit of an NCAA waiver that would allow the school to preserve one of Alaska’s signature winter sports in lieu of having to add a nonwinter men’s sport like lacrosse or soccer.

The 11-member board will meet Thursday and Friday. The cuts to UAA athletics is one of several issues it will consider, and a UAA spokesman said the topic should be addressed during the Thursday meeting, which runs from 8 a.m. to 5 p.m.

The elimination of the four teams — skiing counts as two teams — would save UAA about $2.5 million a year beginning with the 2021-22 school year. All of the teams would remain in place this school year.

The proposal comes at a time when the statewide university system is undergoing deep cuts to state funding that will add up to $70 million over a three-year period ending with the 2021-22 school year.

UAA’s athletic budget in 2019-20 was $9.4 million, and $5.4 million of that came from state funding, according to a university spokeswoman. UAA received $92.7 million in state fund in the 2019-20 school year, and athletics received about 6% of that total.

Here’s how each sport hopes to stay alive.

When the Seawolves hockey team was put on the chopping block three weeks ago, the news caught nearly everyone by surprise.

“The coaches had three hours’ notice to tell their teams,” longtime hockey booster Kathie Bethard said. “Everyone was blindsided, so we’re looking for some time to put a plan together.”

UAA chancellor Cathy Sandeen’s proposal to cut the teams came with little time to react — 22 days from the day the proposal was made public to Thursday’s meeting of the Board of Regents.

Since then, Bethard has helped form a committee that includes about a dozen other Seawolves supporters, including alumni like Rob Conn and Brian Kraft.

Their goal is to come up with a financial plan that, along with some funding from the school, would sustain the hockey program for years to come.

The committee needs time to do that, Bethard said. Her group is asking the regents to postpone a decision about eliminating hockey until its February meeting, which would give the group five months instead of three weeks to come up with a plan.

The Blueliners booster club established an endowment fund five years ago, Bethard said, but "we’ve certainly got to come up with a lot more, and it’s got to be sustainable. It can’t be just for one year.

“If we’re going to start a fundraising effort, we’re going to need those pledges to be continuing so we can show these people we are committed for the next five, 10, 20 years.”

Bethard thinks the program is worth the effort. Scores of former UAA players have stayed in Anchorage and become youth coaches — Dennis Sorenson, an early star for the Seawolves, is Alaska’s winningest high school coach — and it’s hard to find a youth league not impacted by former Seawolves.

“My kids grew up singing that old UAA song and they grew up watching games at the old Sports Center, sitting in the first row screaming and pounding on the glass," Bethard said. “They aspired to play at that level. All my kids ended up playing at a Division I school. The Seawolves gave them someone to look up to, and I want my grandchildren to look up to them too.”

Coach Sparky Anderson hopes that a numbers game can save skiing.

If the regents agree to eliminate four sports, UAA will no longer meet the NCAA requirement that a Division II school offers at least 10 sports. Currently UAA offers 13.

A school that doesn’t meet the minimum requirement can’t compete in postseason play, Anderson said — meaning no NCAA tournament for the basketball or volleyball teams.

So, if the Board of Regents approves Sandeen’s proposal, UAA will need to add another sport.

UAA administrators have suggested soccer, volleyball or lacrosse as possible replacements. (Any sport that crowns individual champions, like wrestling, is considered an individual sport, not a team sport.)

Anderson rejects those suggestions. Any of them would cost more than keeping the men’s and women’s ski team and all would come with complications, he said.

Lacrosse and soccer would require NCAA-caliber playing facilities that don’t exist, and both are played outdoors during months when it’s still winter in Alaska. A volleyball team would use the Alaska Airlines Center, but finding opponents could be tricky. UAA’s Division II teams belong to the Great Northwest Athletic Conference, which offers men’s soccer but not men’s volleyball. Without a conference affiliation, filling a schedule can be challenging.

Anderson argues that both ski teams should be saved because keeping the women’s team could help UAA stay in compliance with Title IX gender equity regulations.

The NCAA has historically made allowances to Alaska, Hawaii and Puerto Rico schools in order to nurture intercollegiate sports in geographically remote locations; those allowances are how UAA was able to host the Great Alaska Shootout for 40 years.

“By keeping skiing, a sport that operates leaner and has the ability to adapt as needed for Title IX compliance, you are poised to save millions of critical dollars for the university over the next decade,” Anderson said in his proposal to the Board of Regents. “Operating budgets for a team sport like soccer or hockey often run into the millions annually. The University of Colorado’s NCAA soccer budget is 1.7 million dollars without having to fly to and from Alaska. Skiing operates for a fraction of that.”

One of Marie-Sophie Boggasch’s first tasks upon becoming the interim head gymnastics coach at UAA in July was to figure out how to save UAA gymnastics in September.

She produced a 63-page document to show the regents how it can be done.

Last week during public testimony to the regents, freshman Marcela Bonifasi needed less than two minutes to sum up the plan.

The team, she said, “would love to show its adaptability at this time.”

In short, Boggasch is willing to make numerous sacrifices to keep the program alive.

“We found the biggest cost-saving possibilities in personnel expenses, travel expenses and scholarships,” she said. “The staff would be willing to forfeit any performance bonuses and eliminate the third coaching position.”

The team could further reduce expenses by traveling on two or three weekends per season instead of the current four or five. Even the scholarship budget could be cut by as much as 50%, from 12 full scholarships to six, although that’s an expense Boggasch would rather not cut so drastically.

The Seawolves are also willing to reduce apparel or supply budgets, although the savings there are minimal, Boggasch said.

In her testimony to the regents, Bonifasi touched on other avenues the regents could pursue in their quest for budget cuts — the reduction of overhead and the possible elimination of underutilized buildings throughout the university system. Those kinds of things should be examined “before cutting academic and athletic programs," Bonifasi said.

“Eliminating any athletic team directly harms the latter two points," Boggasch said. Athletics help increase UAA’s degree-completion rates because most athletes graduate, and it helps increase enrollment. Case in point: The gymnastics team gets 12 full scholarships but has 17 athletes on the current roster.