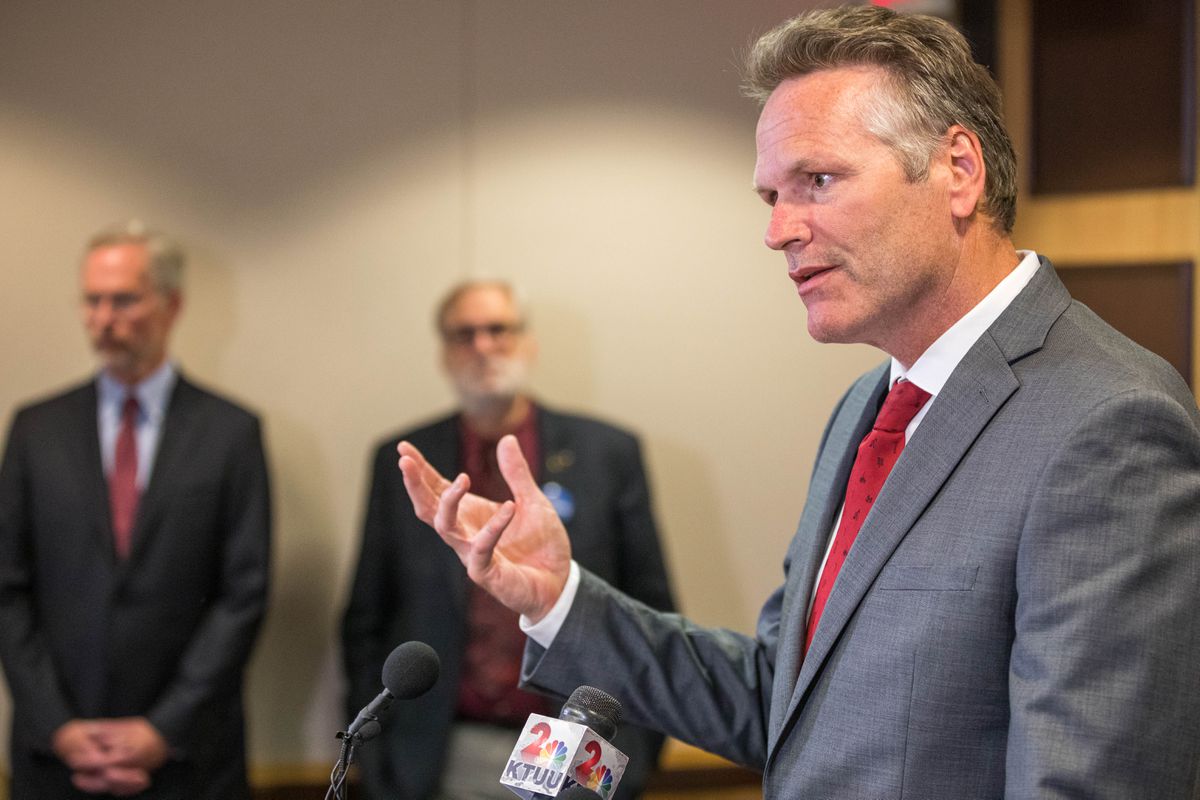 Gov. Mike Dunleavy announced Tuesday that he intends to replace a one-year, $135 million budget cut for the University of Alaska system with a $25 million state funding cut this year and another $45 million cut over the following two years.

Dunleavy unveiled the new, three-year plan at his office in downtown Anchorage alongside UA President Jim Johnsen and UA Board of Regents chairman John Davies. Dunleavy described it as a three-year agreement with UA regents that stemmed from numerous conversations.

“We’re at a place today where I think we’re locking arms and moving forward,” Dunleavy said.

The agreement, detailed in a two-page document signed by Dunleavy and Davies, marks a sharp reversal from the governor’s decision on June 28 to veto $130 million in funding for UA atop a $5 million cut approved by the Legislature. It includes a list of terms, including that UA will report its progress on certain priorities to the governor’s office and the Legislature over the next three years.

The agreement comes more than a month into the fiscal year and about two weeks before the start of UA’s fall semester.

University officials said Tuesday that they welcomed the smaller funding cut and the step-down approach, but the governor’s initial budget veto had also already led to damage at the public university system, including hampering its ability to recruit students and retain faculty.

“But that’s done and so our task at this point is to look forward,” Johnsen said.

A majority of state legislators have already agreed to a $25 million cut for UA, proposing to add back $110 million in state funding for the university system following Dunleavy’s veto. The Legislature included the proposal in a bill last month.

“I think the regents, in the position they’re at, had a gun to their head and basically agreed to the words that were on the page. But the Legislature ultimately has the ability to fund the university, and I hope the governor will respect that,” Sen. Scott Kawasaki, D-Fairbanks, said.

After announcing the three-year agreement, Dunleavy and Davies sat down next to each other on Tuesday and signed a two-page document that they called a compact.

It outlines the terms of the agreement and the state funding amounts for UA’s operating budget: $302 million this year, $277 million next year and $257 million in fiscal year 2022.

The agreement says Dunleavy agrees to $5 million in state funding for UA’s capital budget this year, and a not-yet-determined amount the following two years.

It also says Dunleavy and UA will work together to “remedy the University’s land grant deficit.” It says UA must report its progress each year on a list of “strategic goals” and priorities such as reducing operating costs and administrative overhead as well as increasing research income and “structural consolidation and consideration of single accreditation.”

Davies said he endorsed the compact. It provided UA with much-needed stability, he said.

“One of the biggest problems has been the uncertainty," he said. “I think that this agreement will provide a great deal of certainty so we can begin the process of moving forward together.”

Davies said he expected regents to request the state funding amount detailed in the agreement over the next two years.

Dunleavy’s press secretary Matt Shuckerow said the governor would then propose an annual budget based on those amounts. The doesn’t change the Legislature’s authority to appropriate funding from there, he said.

Under the state’s constitution and state law, the Board of Regents suggests a budget to the Legislature each year, but legislators are the ones who set that amount. The governor may reduce that amount through line-item vetoes, but cannot increase that amount.

Under the three-year agreement, Dunleavy "could choose to veto funding should amounts be appropriated beyond agreed upon amounts,” Shuckerow wrote in an email.

‘Working on this for some time’

Dunleavy had originally vetoed more than $400 million from the state operating budget on June 28 for the fiscal year that started three days later.

That included erasing $130 million in state funding for UA, where he got his master’s degree, atop the $5 million cut approved by the Legislature. The total cut amounted to an unprecedented 41% state funding cut for UA, and nearly 16% of the university system’s total operating budget from the last fiscal year: $855.4 million.

Dunleavy repeatedly said the vetoes were part of a two-year plan to balance the budget by cutting spending, and not by raising new taxes or reducing the Permanent Fund dividend.

The vetoes prompted widespread protests, the launch of a recall effort and warnings of a recession.

The Legislature then passed a bill reversing most of Dunleavy’s vetoes, including adding back $110 million in funding for UA. The bill set this year’s PFD at $1,600, instead of $3,000.

That bill was sent to Dunleavy, who still must decide whether to approve the bill or veto some or all of it.

Dunleavy’s announcement Tuesday that he intends to accept the $25 million cut for UA follows two similar announcements: He has also walked back decisions to veto funding for early childhood education programs and an income-based senior benefits program.

“It’s not my desire to cause angst or worry or turmoil,” Dunleavy said. “But the budget vetoes, in many respects, got us to where we are today, to be able to reduce this budget and then talk about what the budget can look like next year.”

Dunleavy said the funding agreement with UA is not connected to the recall effort.

“We’ve been working on this for some time,” he said.

‘A feeling of relief’

By the time Dunleavy announced the new three-year plan, planning was already well underway at UA for a $135 million cut.

Johnsen had described the cut as “devastating" and “draconian,” and said it could result in the closing of campuses, slashing of degree programs and the elimination of at least 1,000 university jobs.

Already, the regents have taken the unusual step of declaring “financial exigency” in the face of a financial crisis, allowing them to more quickly cut costs, including laying off tenured faculty. Moody’s Investors Service has already downgraded UA’s credit rating, making bonding and borrowing money more difficult and expensive.

Also, Johnsen is already drafting plans to consolidate to a single accredited university with multiple locations — a controversial proposal.

Johnsen said Tuesday he continues to support consolidating the university system under a single accreditation. Regents would have to approve that plan.

Regents will discuss consolidation at their meeting in September, and will also revisit financial exigency, Davies said. They could decide to reverse the declaration, he said.

As for the previously announced furloughs, Johnsen said, the new funding agreement means about 2,500 UA employees will no longer have to take 10 days unpaid leave this year.

Still, Johnsen and Davies underscored that $70 million is a significant budget cut.

It follows about $50 million in state funding cuts over the last several years, Johnsen said.

There will likely still be some layoffs, but far fewer than under a one-year $135 million cut, Davies said. Regents will try to minimize reductions felt by students, he said.

“We’ve already started the process at looking at more administrative efficiencies, but that can only go so far,” Davies said.

Maria Williams, a professor of Alaska Native studies at UAA who chairs UA’s Faculty Alliance, said this year’s smaller state funding cut has led to “a feeling of relief" after weeks of fear and uncertainty. But questions still remain.

“It feels like I’ve been on a horrible, turbulent plane ride that I thought I was going to die on,” she said. “Now we’ve landed and we’re on the Tarmac and they won’t let us leave the plane.”

Williams said she still has serious concerns about the future of the university system. She said she hoped regents reverse their declaration of financial exigency and decide against moving toward a single accredited university.

Alex Jorgensen, a senior at UAA and student government executive, said he’s also relieved by the reduced state funding cut, but worries about the negative impacts of three years of budget cuts.

“We may not have to completely gut academic programs in the spring semester, but in the long-run I think we’ll still see detrimental effects to public education,” he said.

The ADN’s James Brooks contributed to this report.

UA regents voted to move toward consolidating the university system. What happens now?