‘I can’t exaggerate how fast this was’: Cyclist mauled by brown bear near Eagle River 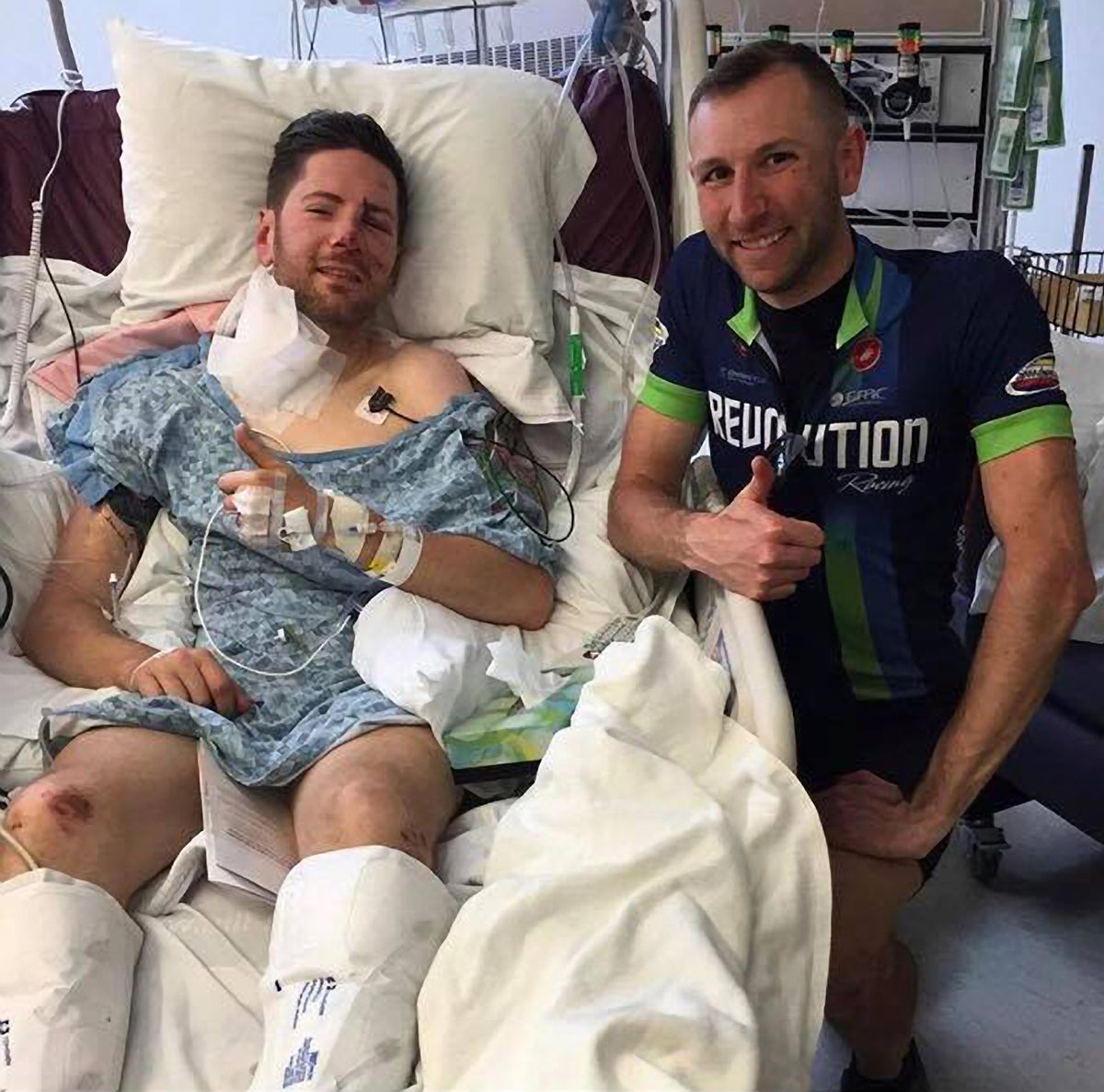 James Fredrick credits his friend Alex Ippoliti for saving his life when a brown bear attacked him Saturday morning as the two biked on a gravel road on Joint Base Elmendorf-Richardson. Fredrick is recovering at Providence Alaska Medical Center from his injuries. (Courtesy James Fredrick)

James Fredrick credits his friend Alex Ippoliti for saving his life when a brown bear attacked him Saturday morning as the two biked on a gravel road on Joint Base Elmendorf-Richardson. Fredrick is recovering at Providence Alaska Medical Center from his injuries. (Courtesy James Fredrick)

On Saturday morning, James Fredrick and his friend Alex Ippoliti were biking down a well-used gravel road on military land near Clunie Lake in Eagle River when they heard a rustling in the bushes.

"With all the things that had been going on, I made sure I had my bear bell on and bear spray with me," said Ippoliti, 34, who lives in Eagle River.

What happened next came so fast that Fredrick, who lives in Anchorage, is still turning it over in his mind from the hospital bed where he is recovering from being attacked by a brown bear. It was one of two brown bear maulings in Southcentral Alaska Saturday.

Shortly after they heard the rustling sound, a brown bear emerged from the woods and ran "20-30 yards" toward them, Ippoliti said. Suddenly, the bear was on Fredrick, pulling him from his bike.

"I immediately just started yelling 'help,' " Fredrick said in a phone interview from his hospital bed Sunday. "I can't exaggerate how fast this was. I don't think it lasted more than 7 or 8 seconds."

While the bear was biting and clawing him, Fredrick remembers thinking that he should try to get the bike between himself and the animal.

Ippoliti was able to get bear spray out, he said.

When the bear left Fredrick and turned toward him, Ippoliti "emptied an entire tank" of spray on it, driving it back into the woods.

Fredrick said he didn't have bear spray with him, and will be forever thankful his friend did and was able to use it.

"Alex straight up saved my life," Fredrick said Sunday. "I'd be dead right now without Alex."

Next, Ippoliti took his shirt off "for a tourniquet and asked me to hold it on my neck while he stood there, yelling at the bear," Fredrick said.

It wasn't until after the bear had gone that the men noticed a cub in the tree above. They had not seen it before the attack, Ippoliti said.

After that things get fuzzy for Fredrick.

The two walked away from the site of the attack, maybe about a quarter of a mile down the road, both said. They called for help and were picked up by medics.

Fredrick said he sustained major lacerations to his neck and lost part of his bicep muscle in the attack. A doctor told him the neck wound was so close to his carotid artery that it was visible from the wound itself, he said. He also had to get stitches on his eyebrow and nose.

Fredrick says the fatal maulings of last week were heavy on his mind even before Saturday. He never imagined this summer's succession of bear attacks would include him, but he doesn't attribute it to anything other than being in the wrong place at the wrong time.

"I just completely think it's coincidence. I can't in any way rack it up to anything else."

The two were on Clunie Lake Road, north of Artillery Road on Fort Richardson land when the attack happened, according to Ippoliti. Each said they had been on the trails, which are accessible with a base recreation pass, before — usually alone.

Fredrick, who is being treated at Providence Alaska Medical Center, said that he's recovering from the shock of the event.

"In the emergency room, I was like, I'll never be able to go in the woods again," he said.

Alaska Department of Fish and Game spokesman Ken Marsh said biologists are investigating the mauling. Based on initial information, they don't consider it a predatory attack but a "defensive attack" by a brown bear.

"It sounds like the sow did what brown bears often do when they perceive a threat," he said.

The second attack happened Saturday evening, on a road outside of Hope, a small Turnagain Arm community. Troopers were called to a reported bear attack at 11:40 p.m., according to an online dispatch posted by the agency Sunday.

Joshua Brekken, 45, was "walking on Palmer Creek Road when he came across a sow brown bear and cub," troopers wrote.

Palmer Creek Road is a 12-mile gravel road that climbs from the Hope highway area near Turnagain Arm to a high valley.

Brekken was "getting some firewood for his cabin out in the area," Marsh said. "He and his dog were walking on a trail out back of a cabin when he looked up and saw a brown bear in front of him."

The bear was about 30 yards away when it charged, troopers wrote. The man tried to climb a tree, but the bear "swatted him out of the tree and injured him" before taking off into the woods with the cub, according to troopers.

Brekken sustained "minor injuries" and went to the hospital on his own, troopers wrote.

Marsh said the two bear attacks this weekend differ in important ways from the fatal maulings of a young runner and a biologist working at a remote mine last week.

"There are two distinctive types of attacks — one that's more troubling than another."

The Pogo Mine and Bird Ridge maulings both appear to have been predatory attacks by black bears, Marsh said, which are "extremely troubling and very, very rare." Biologists are still trying to understand the circumstances of those attacks, which happened within 48 hours of each other.

This weekend's encounters were both what biologists call "defensive" attacks. That's when a surprised brown bear with cubs lashes out to "neutralize" what they see as a threat to their offspring, Marsh said.

For those wondering what's behind the string of four human-bear encounters — including two deaths — in the space of a week, Marsh does not have answers.

"There's no denying we've had a high number of attacks in a very short span of time. I've talked to a couple biologists about this and the answer is — nobody really knows why yet."